In celebration of the launch of Art Everywhere, we revisit author Elisabeth Robinson's re-imagined story behind Edward Burra's The Snack Bar 1930, originally published in the first issue of Tate Etc.

The ham made me happy. It made me think of the interval between telling a waiter what you want and getting it, a time which, if not too long, can be pleasurable itself. A benevolent but capricious petty tyrant, you sit content as hell knowing that your order is being slavishly executed. There is none of the anxiety of suspense (it was a simple request), only the happy anticipation of knowing that in just a few short minutes (and for once, for once!) you’re going to get exactly what you want: a ham sandwich.

The noise of the place cheers you up. The friendly cacophony of forks against plates, chairs against tiles, the door opening and closing, the waiters yelling over the customers who are speaking a language you don’t understand. You always sit at the counter or bar. Even with its inherent social risks, the bar is better than a table, because there’s something about a women trying to look perfectly happy as she eats alone, reading the folded newspaper on a table set for two. Sitting on a barstool, you’ve turned your back on the world. In the mirror over the bar you can spy on fellow patrons, study them, make up tragic love stories for them, or crime stories if that’s the mood you’re in. The barman will talk to you or not, as you watch him work; holding the knife like it’s a scalpel, he has an angry pride in his work and you wonder, was he a doctor back in Romania? Or was it just an adolescent dream? He cuts the ham with the precision of a surgeon: slices thin as silk fall away and wilt on to the carving board, and suddenly you’re starving.

The door slams shut and the bartender’s eyes flash up and then narrow; without knowing it, he sighs. You look in the mirror and see a woman getting into a car and wonder who she was to him. And then he slides the plated ham sandwich in front of you and nudges, like a begrudging afterthought, a lid-less jar of mustard, too.

There’s no pickle. Back home, there’s always a pickle: a long pale spear or a few lurid green buttons, something sour to offset the saltiness of the ham. Always. But what might be the word for pickle in Dutch? Or if it’s France, you might not need a pickle enough to risk the wrath of the proud barman, whose wife or mistress or daughter just got into a car with someone he clearly didn’t like. You accept this defeat, and prepare for the triumpth of the ham and bread and mustard together in your mouth.

A moment later, and the barman stares at you. He grunts and waits for a reply. He must have asked: ‘Everything okay?’

Your feet hurt from walking the strange city (not one to ask directions), you’re there because you’re trying to get over someone who’s already gotten over you, and there’s rain in the evening forecast, but you say ‘Yeah’, because the ham is sweet and salty just like you knew it would be, so ‘Yeah,’ you tell him, ‘Everything’s fine’.

Elisabeth Robinson is the author of The True and Outstanding Adventures of the Hunt Sisters, published by Simon & Schuster, and was the producer of Last Orders, a film starring Michael Caine and Helen Mirren.

Read all issues of Tate Etc. 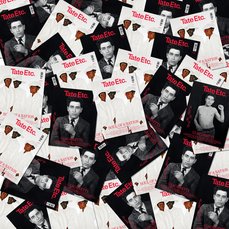