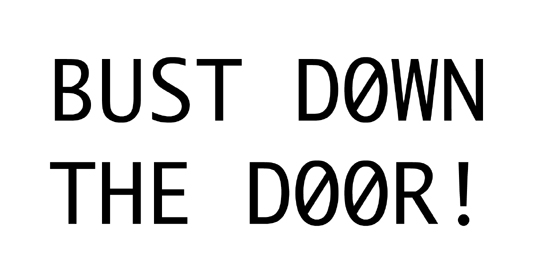 One night in the spring of 2000, after a long day of studio visits at an art school, I opened my laptop and found a mysterious email in my in box. I clicked on a link, a browser window opened, and gigantic black numbers flashed on screen, counting down from ten, as an explosive percussion track began to play. What followed was Bust Down the Doors! , a 55-second text movie telling the story of a late-night domestic raid by an unnamed authoritarian force. I was stunned-never before had I experienced such a dynamic, emotionally powerful work of art on a computer screen, let alone one that had reached me in a hotel room via a 56.6K modem.

In 2001, Young-Hae Chang Heavy Industries won a Webby award in the art category. On the jury, some argued that selecting Young-Hae Chang Heavy Industries would send the wrong message to the art world, since their work does not exemplify such distinctive features of the net art medium as interactivity or algorithmic computation. This argument derives from Clement Greenberg's view that "the essence of Modernism lies… in the use of characteristic methods of a discipline to criticize the discipline itself, not in order to subvert it but in order to entrench it more firmly in its area of competence." Although Young-Hae Chang Heavy Industries' work fails the Greenberg test, it exemplifies many of the historical and relational dynamics of new media art: an experimental engagement with emerging media technologies; the use of new media to reach audiences directly, without art-world intermediaries; collaborative production; and a global perspective.

Since 2000, Young-Hae Chang Heavy Industries have been embraced by the art world in a way that few new media artists have. Indeed, the duo's work may be appreciated more in the mainstream art world than among new media aficionados. Perhaps this is because their work resembles older art forms, such as concrete poetry and experimental cinema, and because its emotionally expressive voices and dynamic visual qualities communicate across disciplinary boundaries. But Young-Hae Chang Heavy Industries' mainstream success may also have to do with something far more pragmatic. Unlike most net art, their work is user-friendly, even for those who find computers alien and discomfiting: no small, hard-to-read text, no hunting and clicking, no decisions to make, no forms to complete or files to upload. Works like Bust Down the Doors! and The Art of Sleep capture one's attention, hold it for a short time, and then come to a decisive conclusion. They don't leave one wondering if one has explored enough, or discovered every hidden link. To a time-starved, attention-challenged audience, Young-Hae Chang Heavy Industries offer conciseness and captivating clarity.

The mainstream art world is, in fact, the subject of The Art of Sleep. Commissioned to coincide with Frieze, the hottest art fair at a particularly market-driven moment, The Art of Sleep features an insomniac narrator who ridicules the art world as "fancy-pants, smart-aleck, self-anointed so-and-sos" and compares art to "the business of religion: it's pretty persuasion. It's hocus-pocus. It's a conspiracy." Our narrator reaches this conclusion via a circuitous route, a literal shaggy dog story in the form of a bedside journal entry in which the sound of a barking dog at night leads down a rabbit hole of logical (and illogical) leaps: from the futility of the dog's barking to the futility of everything, the futility of art, art as the most futile of things, art as futility itself, the "gold standard of futility". At this point, the narrative shifts "from metaphor to materiality" and, in the process, comes unhinged. In our narrator's words, it "leaves the bakery." Art no longer resembles the dog, "it is the dog… art is everything. Not, art can be anything. A fart is art! I kid you not! It's Marcel Duchamp all over again! It's Air de Paris! See?" What are we to make of this?

The Duchampian answer to the question "What is art?" is that art is that which one chooses to call art. Artness is not a quality that things (pictures, stories, performances) possess in and of themselves; it is a status that can be conferred upon absolutely anything, even an ampoule of Parisian air. Art, in this sense, is a matter not of beauty, or profundity, or craftsmanship, but of context.

To call something art is, conversely, to recontextualize it, to relate it to other works of art, both contemporary and historical. When the British artist Richard Long created a visible path by repeatedly retracing his steps through the wilderness and said, "this is an art work," he brought his action and its traces into dialogue with, to name just two examples, the work of Tehching (Sam) Hsieh and Robert Smithson. He said, in effect, "this is not just a walk in the park or a path through the grass; it is a performance, an earthwork." Such acts of artistic recontextualization are thus also philosophical statements, attempts to expand the definition of art. But to call something art is, inevitably, to signal that it merits a particular kind of aesthetic regard, and herein lies the danger for the Duchampian artist. For not everything is worthy of our attention. As our sleep-deprived narrator puts it, "if everything is art, we're going to go nuts. It means that art as we know it is a hoax."

But perhaps it is a mistake to take seriously our narrator's musings about art. After his philosophical tirade, he admits: "this is mindless… a total waste of time." Maybe the real point of The Art of Sleep is, to paraphrase Barnett Newman, that art critics are to artists as ornithologists are to birds, that art should not be taken too seriously, and that critics should find something better to do with their time.

by Mark Tribe, artist and curator, is Assistant Professor of Modern Culture and Media Studies at BrownUniversity. He founded Rhizome.org, and is the author of ‘New Media Art' (Taschen, 2006).

The Art of Sleep