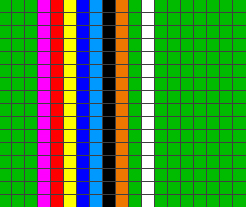 The title of Andy Deck’s work, Screening Circle, is a metaphorical reference to the quilting circle, or what is more commonly referred to as a quilting bee. Quilting bees gained in popularity in the US in the early nineteenth century, permitting women living in rural isolation a chance to socialise come springtime and assist their hostess, who had stretched a quilt top over a quilting frame, to stitch together a finished quilt. What makes this title particularly apt is the common thread this work shares with the quilting bee, namely the opportunity for people who are geographically far flung to come together to participate in a creative, communitarian endeavour.

With Screening Circle, Deck continues to explore the theme of collaborative creativity, a theme he has investigated in depth with his online experiments such as Icontext (1999), Open Studio (2000), Glyphiti (2001), Collabyrinth (2003) and Lexicon (2004). Since 1994, he has been creating what he dubs ‘public art for the internet’, challenging one to ponder what might constitute ‘public’, as well as ‘public art’ in cyberspace. The model of public art Deck is pursuing, however, is not ‘plop art’, e.g. the placement of an abstract or representational sculpture or monument in a public space such as a park. Instead, it is more instructive to compare his work to public art that culls the collaboration of community members and prioritises social issues and political activism. In this case, one of the primary issues Deck has chosen to address is the commercialisation and marginalisation of independent media. His activism takes shape via the creation of online contexts meant to subvert commonly held notions regarding interactivity (point-and-click versus real-time collaboration), productivity software (proprietary versus open source), and the boundaries between the artist and viewer (rigid and immutable versus shared authorship).

Upon entering Screening Circle, the visitor is treated to a work that is pared down, minimalist, nothing extraneous or superfluous; the aesthetic is lo-fi and unpretentious. In comparison to some of his other works, it is also more intuitive and user-friendly. There is no text on this page – the visitor is not spoon-fed instructions on how to engage with the work; rather, the user is required to engage in a certain degree of exploration. What the visitor is invited to explore is a square ‘quilt’ centered on the screen, superimposed on a white background. This quilt consists of a border of tiny, undulating squares (or icons) of equal size. The appearance of these icons vary – some contain a simple pattern, others display a drawing. Some of these drawings are hesitant and basic, some contain text, while others convey a playful effort to generate an image with some complexity. These are the icons that have been created by Deck or further manipulated by someone who has visited the site. For visitors who would like to learn more about the work, this page also contains a small, colourful icon in the upper left hand corner of the screen that, when clicked, takes the viewer to an informational page that contains a large version of this quilt icon. Clicking on each of the individual squares of this icon allows one to watch a slide show (e.g. a view loop) of all the quilt ‘pieces’ previous visitors have created, as well as read commission credits, instructions on how to navigate through and contribute to the work, information about the artist, and so on.

To add to the ‘quilt’, visitors click on one of the icons forming the quilt’s perimeter. When they do so, four slightly larger square icons appear, one in each corner. These four icons, or frames, constitute one ‘loop’. To change one of these corner icons the user chooses one via point-and-click; when s/he does so, a larger version of the icon appears in the centre of the quilt, nearly filling the white space. This larger icon resembles a very low resolution graphic, blocky and crude. Like Deck’s other works, Screening Circle is engrossing, bordering on addictive. While engaging with the work (‘playing’ may be an even more accurate descriptor than ‘engaging’, in an entirely complimentary sense), one may wonder why the canvases he has provided for visitors to the site do not allow for more nuanced or detailed drawings. This simplicity could be interpreted as a communitarian gesture in that visitors who may feel shy or uncertain about their artistic abilities would not be intimidated out of making their own contributions to the piece.

When the users finish drawing, their image is automatically saved, becomes part of the larger ‘quilt’, and can be viewed (and further manipulated) by subsequent visitors. However, this is not to imply that once all of the icons in the work have been manipulated the work is somehow ‘finished’. Unlike a traditional quilt (or any material art object, for that matter), Deck is not inviting users to collaborate as a means to complete a project, which, once completed, is unchangeable. Internet art by its very nature is spatio-temporal (in other words, it conflates time and space), but different internet artists work with this temporality in a myriad of ways. With Screening Circle, Deck works with temporality on several levels. On one level, its temporality is derived from its interactivity; the work is constantly changing due to visitors’ contributions, and these contributions’ impermanence. On a second level, he also endeavours to incorporate a time-based linearity into the work by making it possible for the visitor to watch – i.e. screen – an animated loop consisting of all of the 544 frames that make up the ‘quilt’.

Screening Circle raises issues regarding the limitations of and possibilities for collaboration and shared authorship, none of which are necessarily limited to online environments. Contrary to common perception, women did not collaborate in the actual designing and producing of quilts. Rather, bees were organised to assist the hostess in quilting the top, which she had already designed and made. She was also responsible for choosing the actual stitches her companions were to use. Therefore, one might compare the hostess to a professional artist who dictates the process and final product to his or her assistants. In Screening Circle, however, the dynamic is different. While Deck has perhaps provided the visitor with a proverbial electronic quilting frame, he is placing him or her in a situation where they are invited to actively interpret the work (and by extension the contributions of previous visitors) through their own contributions. In other words, this piece is not meant to invoke passive absorption or contemplation, as many might expect from a traditional work of art. Nor is it meant to emulate the ubiquitous web surfing experience of point-and-click, which also invites a certain form of passivity. Instead, Deck has endeavoured to carve out an online place conducive to shared artistic authorship that exists betwixt and between these two spaces, one reinforced by the traditional museum – or gallery-going experience, the other spurred by the privatisation of networks.

Andy Deck adapts the cultural tradition of the quilting circle and the participative round table into an online format for producing motion graphics. Participate in its ongoing creation by contributing your own design.