Film, Play, Power and the Computational, or Byting Celluloid  February 2006 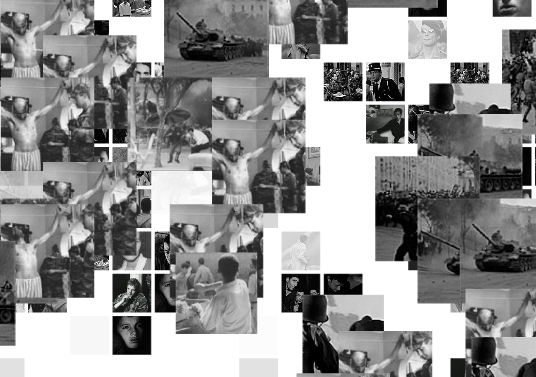 On Marc Lafia's and Fang-Yu Lin's The Battle of Algiers

In some sense, all films are computational, all films a kind of .net art. Think about it: a film is the product of a selection from different shots, hours of dailies and coverage – the film rests on a database. The film we end up seeing is only one possibility; cut it again and there's a different movie. And then there's the manner in which these scenes and these shots come to be this film. The director, the editor, the producers, the screen writers – not to mention an entire cast of interested parties – conspire to make the final cut we see. Which is to say, films are built on a database and are authored by a network.

Of course, most of the films that make it to the Cineplex these days do not seem like .net art. They are stories, moving along according to some human law of inevitability: the would-be lovers overcome their misunderstandings, the family reconciles, the fighter wins – or loses – but in any case learns a lesson. These films are based on screenplays, on words, on stories; they're illustrated storybooks. They do not really operate with the modalities of the moving image. We don't witness the multiplicity, the varied directions, implicit in the film, that's implicit in all films, the multiplicity that's implicit in the meeting of database and network. It's as if these filmmakers assume that because the movie reel is continuous the story must be continuous, that because there's one screen they can only project one image.

Movies do not have to be like this. There are films that don't interpret the reel and the screen as univocal but as a machine that winds time and folds place into complex configurations, that stream multiplicity, ambivalence, play. Gillo Pontecorvo's 1965 film The Battle of Algiers is one such film.

The Battle of Algiers traces the struggle between the FLN and the French as they vie for control of Algeria. One might assume that this is a familiar tale as one can see the story even before watching the film: A colonized people want to be free (perhaps the film focuses on a family of characters with whom we identify, for whom we root); the oppressors want control (they're bad people); there's a struggle (action scenes) – and the Algerians are free at last!

And indeed the film opens this way. We see the French torturing a captured Algerian into telling them where the last leader of the FLN is. We then see French soldiers gather for the capture of our presumed hero, Ali La Pointe, the last holdout, hidden behind a wall with a man, a woman, a little boy. It seems we have our villain and our valiant, oppressed family. As the film cuts to years earlier, it seems like we have our storyline: the struggle, and capture, of Ali La Pointe.

But this is not a film about Ali and his capture. That is not his family behind the wall but a collection of FLN operatives – including the child. And we learn that Colonel Mathieu, the presumed villain, was a seminal figure in the French resistance against the Nazis. As the film continues, the story of Ali becomes dispersed by other action and at times is utterly forgotten. We never identify, positively or negatively, with any of the characters. Rather, we witness multifarious, diverse events. The Algerian organization, the FLN – the presumed good guys – is itself a ruling party that issues decrees that are at times quite cruel: As the FLN bans alcohol in the Arab quarter, we see a pack of children kick a drunk to death. And La Pointe's capture is not the crucial turning point anyway, but a turning point. In the film's final minutes, we see the Algerians exalt in their repelling of the French occupation – an uprising that occurred, we are told, for "no apparent reason." In this film, there is no moral clarity just as there is no clear building of tension and release, no climax and resolve. For Pontecorvo, power dynamics are too complex for a story.

Indeed, one of the film's implicit argument is that story is itself a vehicle of power. Pontecorvo is not the first to proffer such a claim; it is a mainstay of the avant-garde for the past 100 years. Story and its arsenal – such as identification and unilinear cause and effect – reduce the complexity of the world as it coerces people and events into its chains of action.

Enter Marc Lafia and Fang-Yu Lin. Their The Battle of Algiers asks: if film is implicitly computational, what happens to it when it's taken up by computational technology? This has long been the project of Lafia who is a filmmaker, digital media artist, and information designer. Indeed, this piece blurs the line that would distinguish one title from the other. And it is not surprising that he is partnered with Fang-Yu Lin, an interaction designer and emerging multimedia artist, whose work explores and expands the boundaries of human-computer interaction and who has worked with other media artists before partnering with Lafia.

This The Battle of Algiers deemphasizes the film's dramaturgic components, focusing on the film's modes of movement, its meanderings and collisions, its speeds and drifts, its points of intensity, its lines of force, its fluxes and flows. This The Battle of Algiers brings the database to the fore, articulating and amplifying the film's multiple trajectories. The film's images become the cells of this piece – echoing the cellular structure of the FLN – and we are able to see the film's dynamics more clearly. Which is to say, we don't see dramatic events per se but the modalities of the events, the shapes and movements – the trajectories – of the French-Algerian conflict. But don't think that just because the story has been banished that the intensity or affect has been banished as well. Zoom in, linger, and you'll soon discover the pathos of war.

These modes of engagement become the rules of this application: French cells stay more or less stationary; Algerian cells pop up then disappear, masking, ambushing, striking. Action is decentered yet interconnected: what happens in one corner may affect what happens in another corner. The result is an ever-shifting dynamics of shape, affect, and effect. This interconnection is constitutive of the power dynamics as the clear boundaries that would separate French cells from Algerian cells begin to bleed. Power, it seems, rarely takes center stage where one side dominates another but rather, like the ancient Eastern strategy game, Go, the combatants conspire together to create the shapes and movements we see – a move here demands a parry there. This movement is neither parallel nor harmonious; the two sides do not mirror each other. What we witness are emerging shapes, an aparallel creation, one side eeking out more territory, greater effect, even if fewer moves are involved. Just as in the game of Go, it's all a matter of shapes in motion in which the slightest move, strategically placed, can change everything.

Pontecorvo's film tells us that cinema can articulate the multiplicity of power and politics. Marc Lafia and Fang-Yu Lin tell us that the computational can multiply the cinematic. As the byte metabolizes celluloid, the film's multiplicity is given free reign. While the reel is constrained to its linear track and its finished product, the computational remains open, a perpetual event. The algorithmic dynamics of this The Battle of Algiers move beyond cinema to become a cinema-machine, remaking itself again and again: a veritable reign of images. If Pontecorvo teaches us that story is a dictatorial power that suppresses the movement of the image, Marc Lafia's and Fang-Yu Lin's The Battle of Algiers is nothing less than a revolution.

Or perhaps "revolution" is the wrong word. We've left the realm of the reel that goes around and around and entered a new territory. The byte has splayed the reel, excavating, expanding and exploding its nascent multiplicity. This The Battle of Algiers does not as much offer a revolution as a proliferation – which may, after all, be the true revolution.

Daniel Coffeen is a rhetorician and theorist, tending to matters visual and linguistic. He presently teaches in Rhetoric at UC Berkeley.

The Battle of Algiers

Marc Lafia and Fang-Yu Lin present a continual, interactive re-composition of scenes from the seminal 1965 film The Battle of Algiers, by Italian director Gillo Pontecorvo.