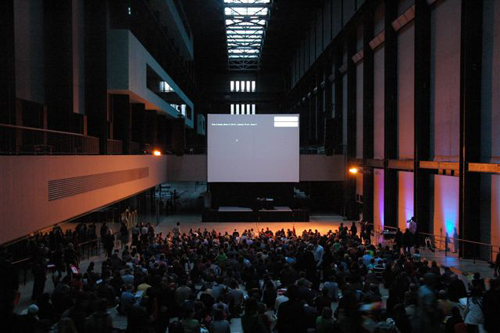 During the second half of the last century, the pioneers of experimental electronic music started looking for new musical forms based on an economy of elements. The Minimalism movement started during the 60s with composers like Philip Glass, Steve Reich and Terry Riley, using electronic devices such as tape recorders to create repetitive loops and structures.

As Classic Minimalism developed, it grew to emphasise not a minimum of material, but a minimum of form, often on a horizontal level, that foregrounded other elements: timbre, texture, and the vertical dimension of the music, which did not so much progress (according to classical/compositional norms) as amass.

From Digital Discipline: Minimalism in House and Techno, Philip Sherburne (b.1971)

Minimalism was recovered in the 80s by a series of experimental electronic artists, and diversified into different aesthetics. Ultra-Minimalism started during the mid 90s and is characterised by the most extreme economy of elements, tonalities and rhythms, using electric impulses and digital tones.

Sounds had the same individuality as light. They were neither inside nor outside, but were passing through me. They gave me my bearings in space and put me in touch with things. It was not like signals that they functioned but like replies...

The three live works presented as a part of this evening, all demonstrate relationships between the aural and visual, through the use of software and data manipulation techniques which integrate the production of both sound and image. A visceral embodiment of elements reverberating the stark industrial architecture of Tate Modern’s Turbine Hall.

Our audio player is currently undergoing an upgrade. Apologies for the temporary break in service. Please return in December to access this media.

An improvised, musical concert by Robert Henke (aka Monolake), using the Altantic Waves audio-visual, network performance instrument; connecting two computers across the internet enabling musicians to work live on the same musical score from any location on the planet. Acting as both a bridge and a distributed instrument, the interface is displayed to the audience, making the process of sound creation transparent and allowing for an anticipation of musical developments. For communication between the remote and local performer, the interface includes a simple chat function, which similarly is part of the display. The remote player was Torsten Pröfrock, who contributed to the event from the Monolake studio in Berlin.

Starting with an empty score, the composition is developed and constructed by populating the interface with events. These build up a musical state, which in the course of the performance is modified, altered and finally destroyed. The score itself is represented as a matrix of 16 by 32 grey fields, ready to be filled with coloured squares of different sizes. These squares represent midi triggers for pre-prepared sounds. Red dots scan through the matrix, triggering sound each time they pass through a coloured square. The dots’ movement and direction is controlled by the performers. The result is a highly rhythmical, repeating and permutating series of percussive events.

Whilst Atlantic Waves provides the score, the instrumentation depends on other sound-generating applications. Sounds have been created specifically for this event according to a limited set of criteria: duration, spectral distribution, tonality and sonic evolution. The result is a discrete set of musical relationships and building blocks, used by both the local and the remote performers. The two performers also alter the graphical interface, dramatically changing the visual display, to become more and more abstract.

The Atlantic Waves project started in 2002, for a performance between Robert Henke and Scott Monteith (‘Deadbeat’) and has seen many evolutions since that time. The version used in this performance was re-designed especially for the occasion. Henke is best known for the subtle, cinematic music he has recorded under the name Monolake, an extensive catalogue of textural ambient techno and stark minimal house. Henke founded the label, Imbalance Computer Music and long-term collaborator Gerhard Behles founded the software company, Abelton. 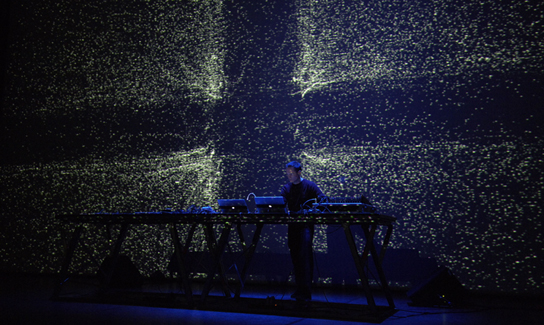 xerrox is alva noto’sfollow-up work to the ‘transall’ series, expanding themes of dissolution and atomisation. xerrox takes its title and principle from the original Xerox machine that copies graphic matter by the action of light on an electrically-charged surface, reforming the image with a resinous powder. In a similar way, alva noto’s xerrox is born out of a process, in which the ground material undergoes a series of shifts, stretches, zooms and ratio adjustments. The work deals with ideas of duplication, multiplication and repetition, creating and sustaining phenomena that are, in turn, affected by compression, added information and a breakdown in resolution. The constant examination of this process becomes the content of the sound itself.

Whereas in former alva noto releases, sound has always been internally generated within the computer, the xerrox work features a collection of everyday sounds such as muzak, television advertising melodies and elevator bell tones. These ground factors are retained, whilst great volumes of digital noise arise out of the discrepancies between them and the affected duplications. This ongoing ‘copying process’ leads the work further and further into visual and aural abstraction.

Berlin-based sound artist and producer Carsten Nicolai [alva noto] has established himself as a leading member in the realm of electronic sound and visual designers, using art and music as hybrid tools to create microscopic views of creative processes. He creates precise rhythmic structures with electronic clicks and glitches as essential elements of his music, combining these pared-down electronic sounds with the rhythmic groove of Hip-Hop and R&B. Nicolai’s works captivate consistently through their elegance, simplicity and cool technicism.

Read an interview with Carsten Nicolai by Daniel Bailet.

Electronic composer/artist, Ryoji Ikeda focuses on the minutiae of ultrasonics, frequencies and the essential characteristics of sound itself. Music, time and space are shaped by mathematical methods as Ikeda explores sound as sensation, pulling apart its physical properties to reveal its relationship with human perception.

Using pure data as a source for sound and visuals, datamatics combines abstract and mimetic representations of matter, time and space in a powerful and breathtakingly accomplished work. datamatics is the second audiovisual concert in Ryoji Ikeda’s datamatics series, an art project that explores the potential to perceive the invisible multi-substance of data that permeates our world.

Projecting dynamic, computer-generated imagery, Ikeda’s intense yet minimal graphic renderings of data progress through multiple dimensions. From 2D sequences of patterns derived from hard-drive errors and studies of software code, the imagery transforms into dramatic, rotating views of the universe in 3D, whilst the final scenes add four-dimensional mathematical processing which opens up spectacular and seemingly infinite vistas. A powerful and hypnotic soundtrack reflects the imagery through a meticulous layering of sonic components to produce immense and apparently boundless acoustic spaces.

A conversation between Carsten Nicolai and Daniele Balit. In context of an alva noto performance for The Long Weekend 2006, Tate Modern

Recordings of performances by Ryoichi Kurokawa, Toshimaru Nakamura (with Billy Roisz) and Sachiko M (with Benedict Drew), from The Long Weekend 2007