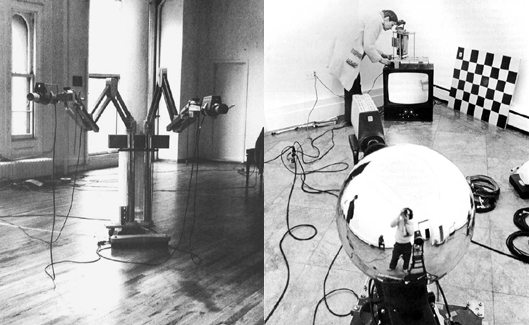 Major figures in the history of video art and electronic media, the Vasulka’s have contributed enormously to the evolution of digital aesthetics through a prolific body of work exploring the malleability of vision, the manipulation of electronic energy and the interrelation of sound and image.

This programme will highlight single-channel video works created in the 1970s in conjunction with a presentation by the artists about their current work, in the online platform of Second Life.

The Vasulkas' investigations into analogue and digital processes and their development of electronic imaging tools, place them among the principal architects of an electronic vocabulary for image-making. Their early collaborative efforts, produced from 1970 to 1974, are primarily focussed on phenomenological explorations that deconstruct the materiality of electronic signals.

In the mid-70s they collaborated with Geoffry Schier to build the first real-time, computer-controlled, digital video processor. Since the late 70s their work has expanded to include video installations involving robotic sculptural elements and live interactive performance.

All of their work is in some way connected to a fundamental agenda: to interrogate the intrinsic properties of the machine as cultural code and the latent or overt perceptual changes that emerge.

An archive of work by Steina and Woody Vasulka

An international network of cultural organisations and online video archive