Joseph Mallord William Turner, The Goddess of Discord Choosing the Apple of Contention in the Garden of the Hesperides exhibited 1806 . Tate

Walk among the works of Turner, and explore some of his many paintings, sketches and watercolours

Joseph Mallord William Turner was the outstanding British painter of his generation. He challenged the conventions of the time, with new techniques and subject matter. Turner often shocked his contemporaries with his loose brushwork and vibrant colour palette. His work often portrays the development of the modern world.

Turner made his name with watercolours of topographical landscapes and buildings. He first exhibited at the Royal Academy in 1790, when he was 15. He became known for the atmospheric effects he produced through his experiments with light and shade. From the early 1800s, he began to prepare his canvases with a white ground. This gave his oil paintings the luminous glow seen in his watercolours. In the 1820s, he adopted new pigments to make his colouring more brilliant and varied.

Turner was a leading exhibitor at the Royal Academy for many years. He also showed work at his own gallery, which he opened in 1804. Early in his career, he recognised the importance of making his works widely accessible, and he reproduced many of his paintings as prints. Turner's handling of paint became progressively looser and deliberately less precise. This caused controversy among his critics.

Many of the paintings most admired today would not have been considered ‘finished’ by Turner or his peers. These unfinished works were discovered in Turner’s studio after he died in 1851. They joined the finished and exhibited pictures acquired by the nation with the Turner Bequest.

By the time Turner painted this work, in the 1840s, he often finished his exhibited pictures with few details. The last marks he added to this painting seem to have been the outlines added to the blocks of white that make up the distant sails. Turner makes a reference to the Dutch 17th-century artist Jacob van Ruisdael in the name he gives his imaginary port. Turner first encountered the work of the artist during his visit to the Louvre in Paris in 1802.

This work is probably Turner’s first attempt at an oil painting of a mythological subject, set in a ‘classical’ landscape. This is a stylised background, painted to evoke the landscape of ancient Greece or Rome. The story comes from the Aeneid, by the Roman poet Virgil. The Trojan military leader Aeneas wants to visit the Underworld in order to consult the ghost of his father. He meets the Cumaean Sibyl (a priestess at Cumae, a Greek colony near Naples, Italy). She agrees to guide him through the kingdom of the dead. The deep lake, surrounded by dark woods, was believed to lead to the Underworld. Turner based the Italian setting of this painting, with its view of Lake Avernus, on a drawing by his patron, Sir Richard Colt Hoare.

Joseph Mallord William Turner, The Goddess of Discord Choosing the Apple of Contention in the Garden of the Hesperides  exhibited 1806

In ancient Greek mythology, the Garden of the Hesperides was situated on the slopes of Mount Atlas, where a tree of golden apples grew. The daughters of Hesperus, the evening star, took care of the tree. It was watched over by a dragon that never slept. Turner shows the garden as a peaceful landscape in a protected valley. The goddess of Discord, in disguise, takes one of the apples. This small act began the events that led to the Trojan War.

17th century French painter Claude Lorrain (known as Claude) was Turner’s favourite ‘Old Master’ painter. Turner adopted Claude’s style of painting in many paintings at this time. It is one of a pair of paintings showing the rise and fall of the Carthaginian Empire in North Africa. Carthage was the most powerful empire before the rise of ancient Rome. Its decline is symbolised by the setting sun. Turner saw the rise and fall of once-great empires as inevitable. The other half of the pair, Dido building Carthage, or the Rise of the Carthaginian Empire, hangs, at Turner’s request, in the National Gallery alongside a painting by Claude.

Regulus was a Roman general who was captured by the Carthaginians. They sent him back to Rome to negotiate the release of Carthaginian prisoners. When he returned to Carthage having failed his mission, he was tortured by being left out in the sun with his eyelids sewn open. The dazzling light in the centre of this work dramatically illustrates Regulus’ cruel punishment. Turner first exhibited this painting in Rome in 1828. His audience there would have recognised it as a seaport from a work by the 17th-century painter, Claude Lorrain displayed in the Uffizzi gallery in Florence. It appears that Turner wanted to show himself as part of a tradition of landscape painting started by Claude.

The tradition of Dutch sea paintings was an important influence on Turner’s seascapes (known as ‘marine’ paintings). In the early 1830s Turner made a series of paintings inspired by 17th-century painters such as Willem Van de Velde, who took subjects from naval history. Turner may have been making a topical reference to the 1831 Belgian Revolution. This resulted in Belgium becoming an independent country from the Netherlands.

In this painting, Turner illustrates a scene from ‘Undine’, a fairy tale by German writer Friedrich de la Motte Fouqué, published in 1811. Undine, a water spirit, was born without a soul, but she can gain one by marrying Huldebrand, a knight. The otherworldly light and dreamlike figures reflect the nature of the story. It was very popular throughout the 19th century and inspired many writers, including Hans Christian Andersen.

This is the first of four pictures by Turner telling the story of Aeneas by the Roman poet Virgil. They were the last works Turner exhibited at the Royal Academy. Only three survive. They are his final paintings in the ‘classic’ style of 17th-century French painter Claude Lorrain. It is difficult to identify the figures. Trojan hero Aeneas stands on the left in his ‘Tyrian’ purple cloak. With him stands Cupid, the Roman god of love. The god Mercury, with his wand and winged feet may not be present, although part of the title. Perhaps he has already flown away, after delivering a message to Aeneas, as Virgil's story describes.

In this unfinished sea painting the light of the sun, reflected by the water, dazzles the eye and obscures the view. This visual effect echoes the progress of Turner’s own work on the painting. He returned to areas of the canvas over a period of several years, covering the original subject. Dark shapes that appear through the layers suggest boats. The buildings on the left have not been definitively identified but may represent Venice. By reworking the canvas Turner has shifted the focus of this painting from the yacht to a less tangible subject—that of light itself.

Turner painted this self-portrait in around 1799 when he was 24 years old. He possibly intended to mark his election as an Associate of the Royal Academy. This was an important moment in his career. It meant he could exhibit his works in the Academy without fear of rejection by any members of the committee. Despite his young age, Turner had already made a name for himself as an original, accomplished painter with great technical skill. This self-portrait features on the £20 note issued by the Bank of England in March 2020. 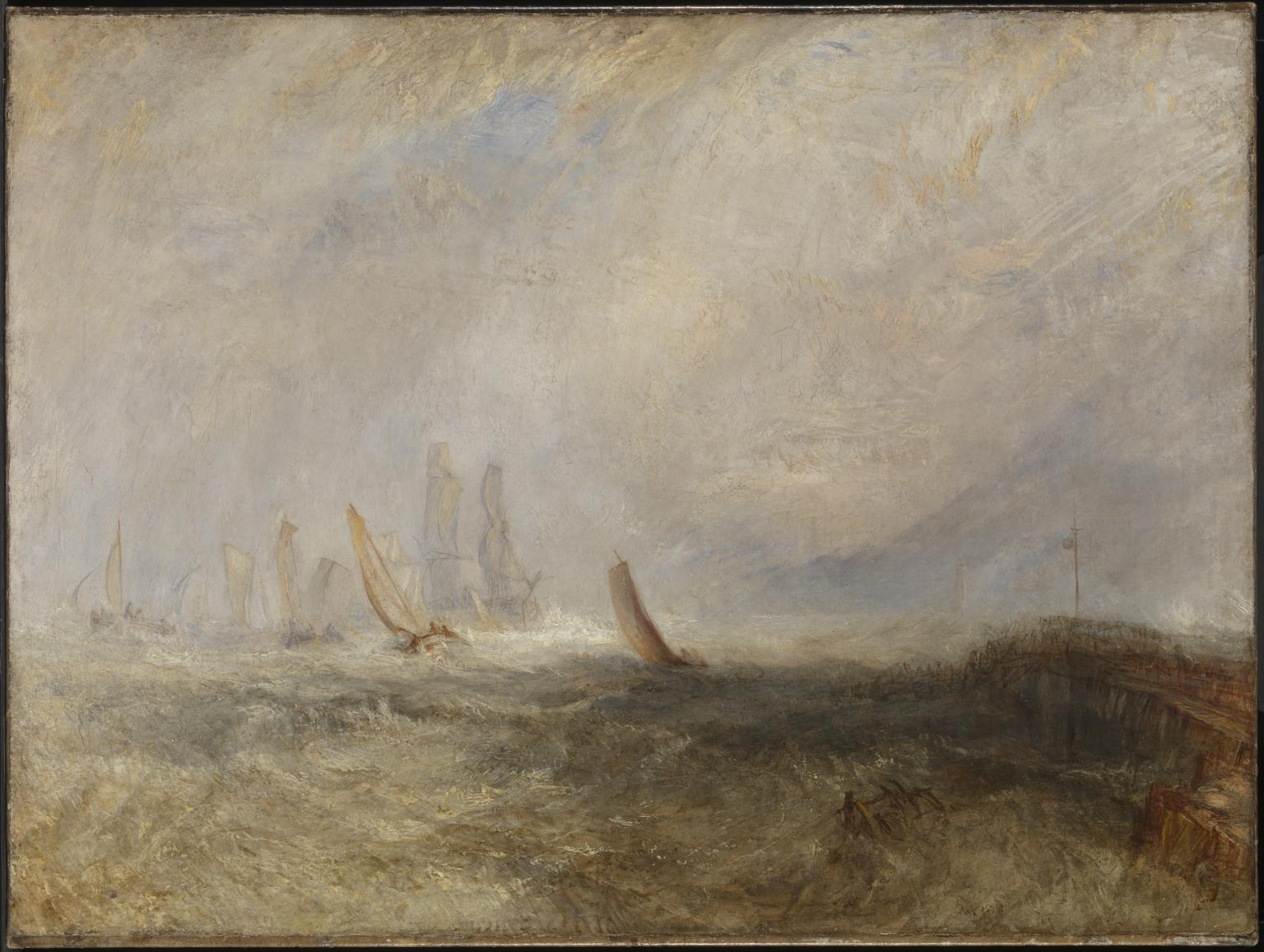 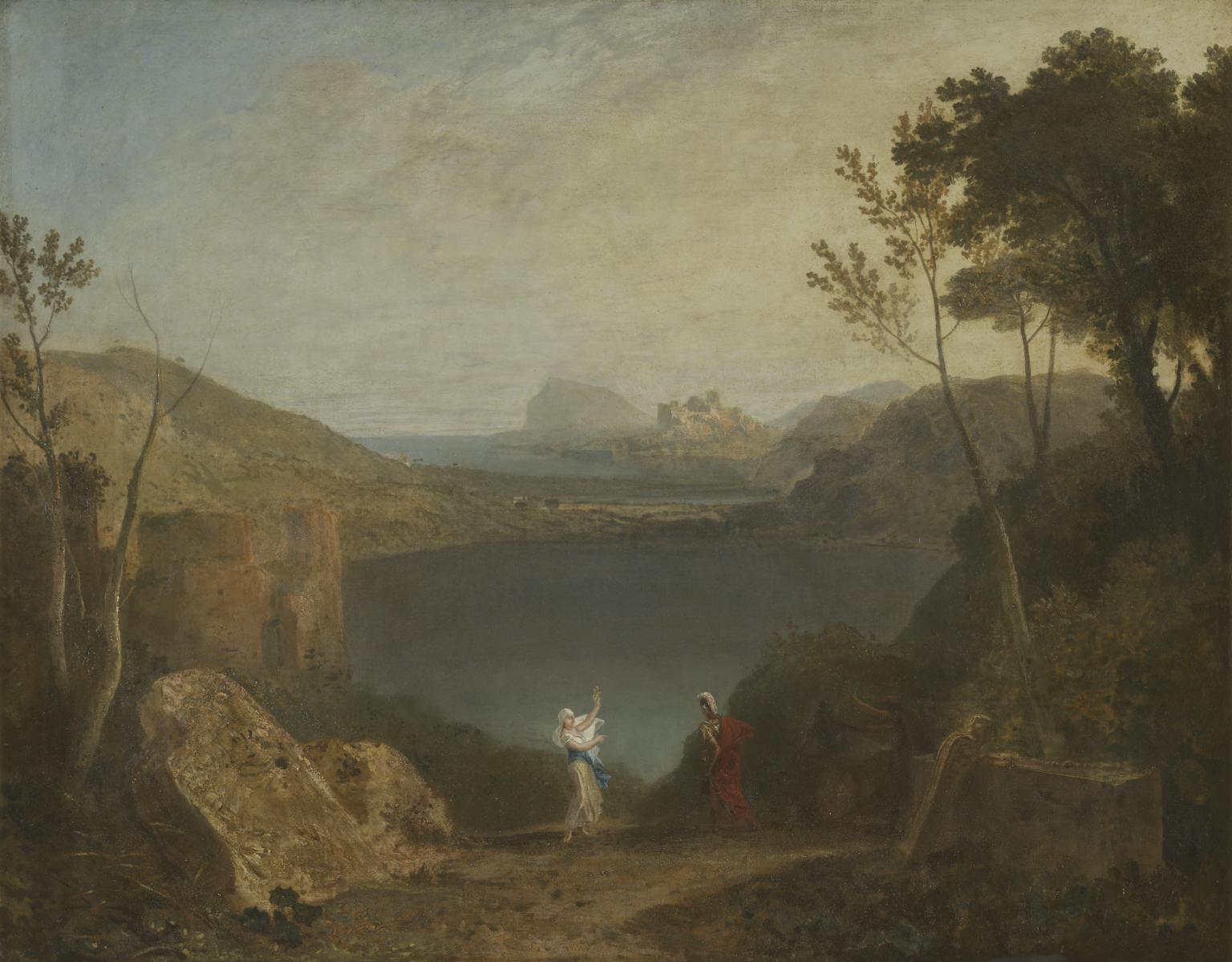 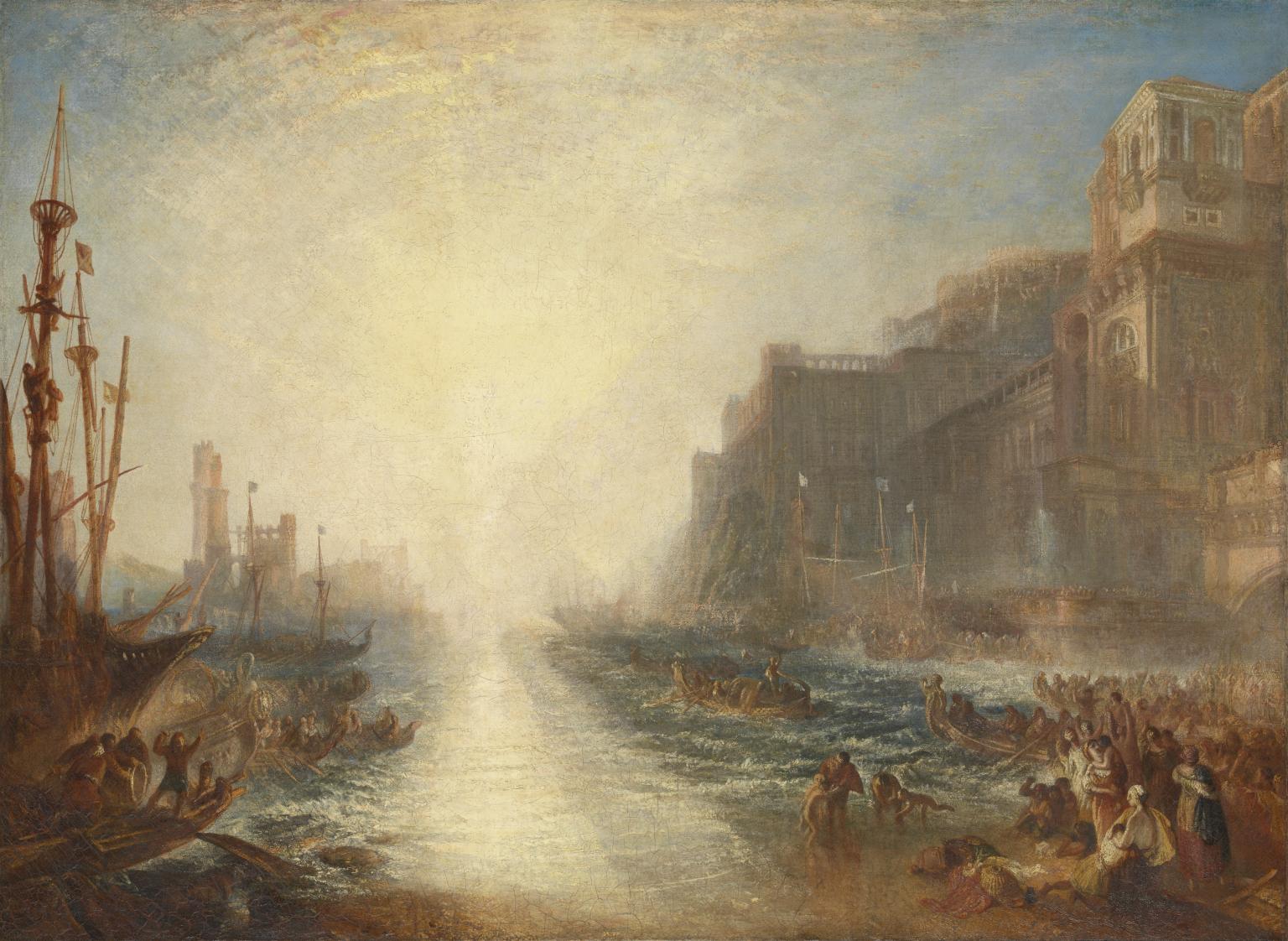 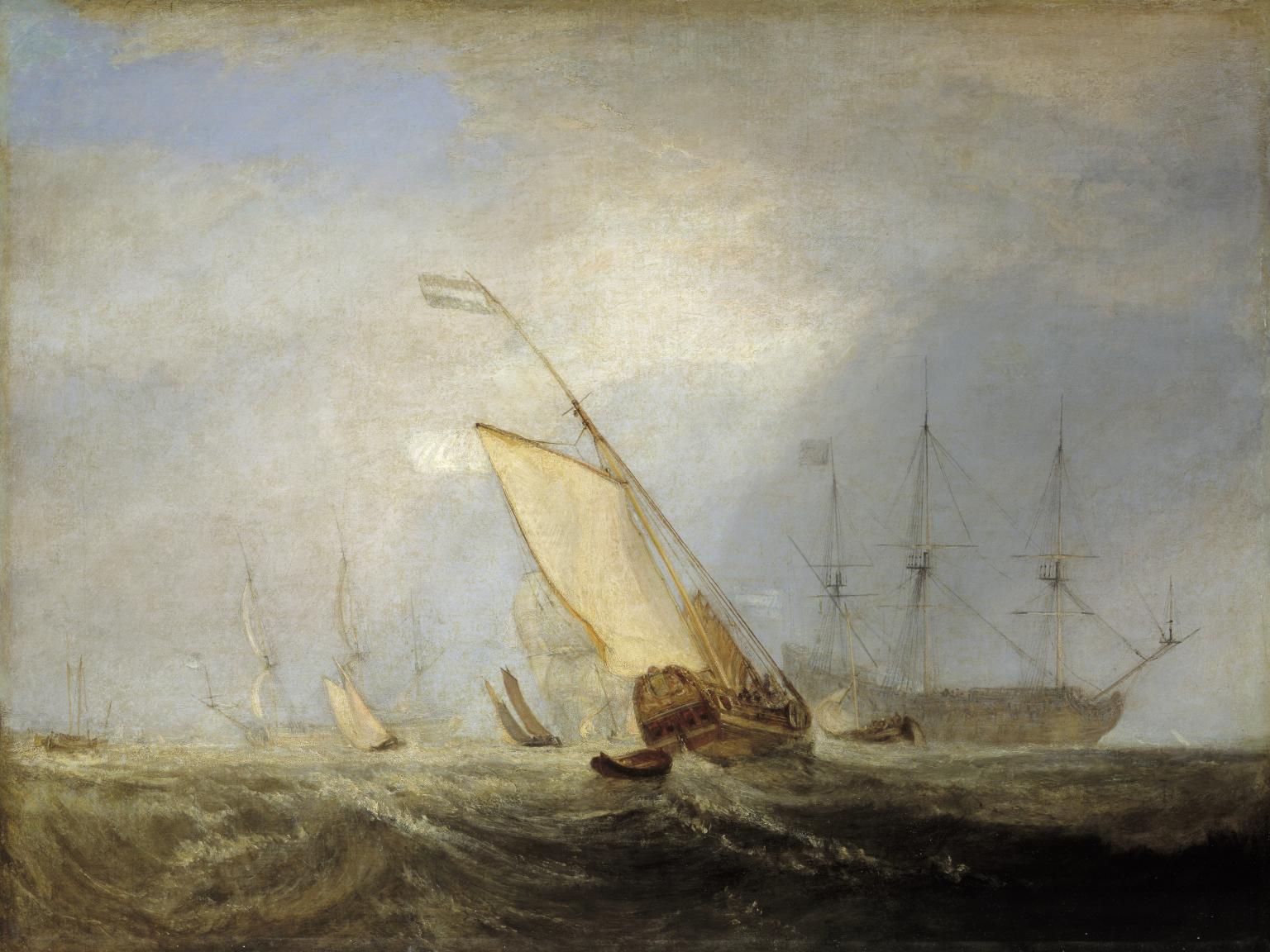 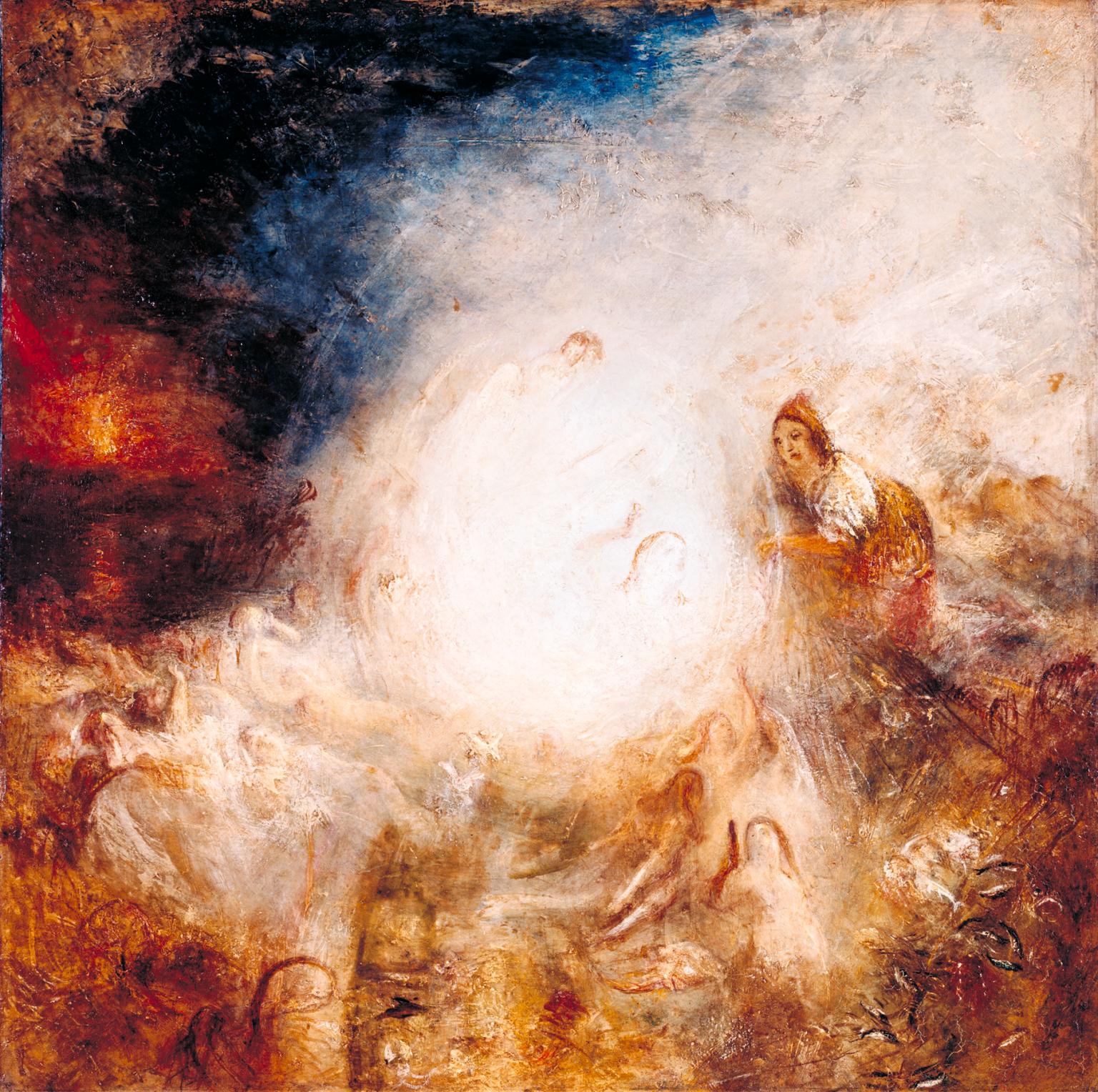 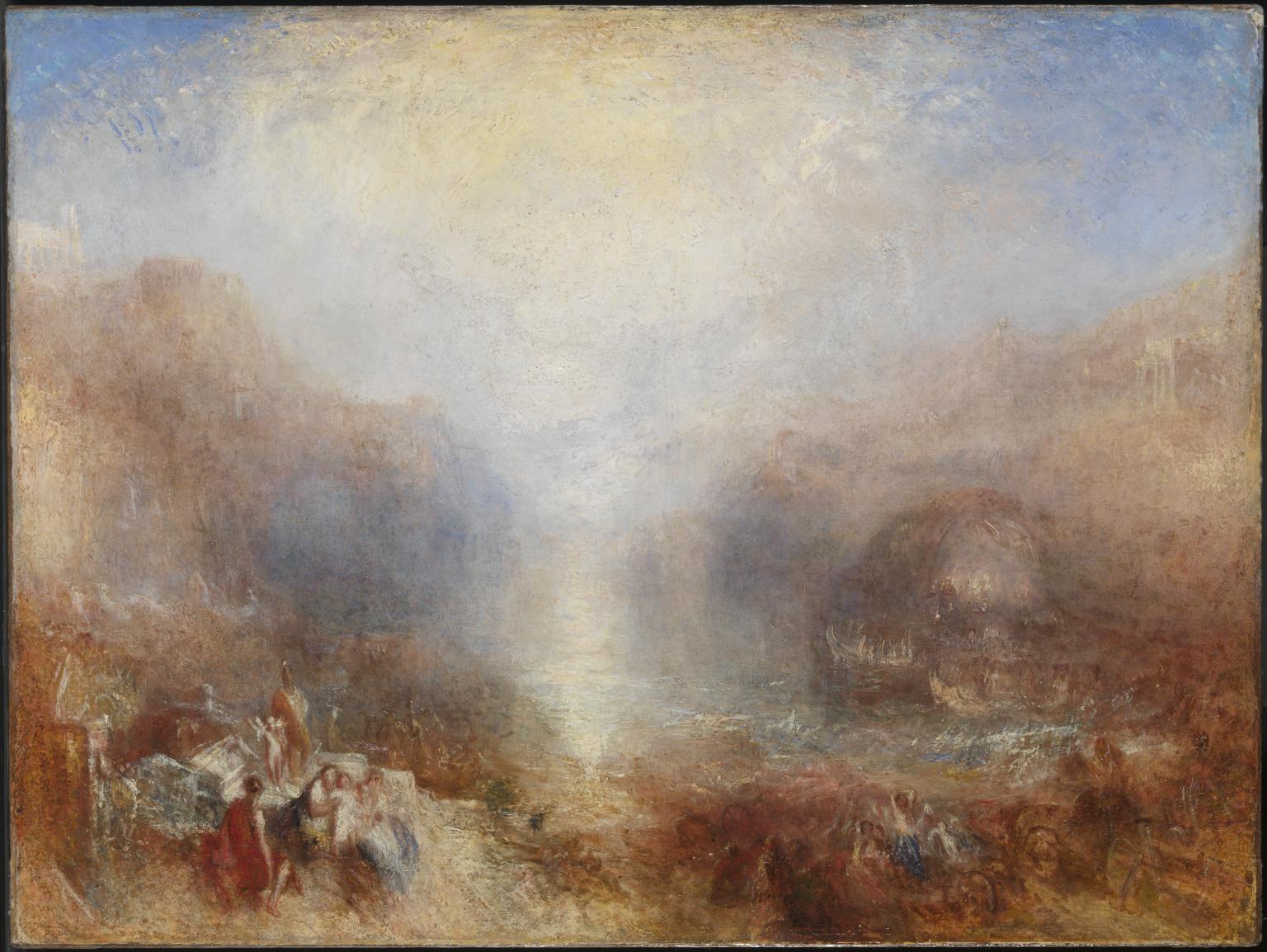