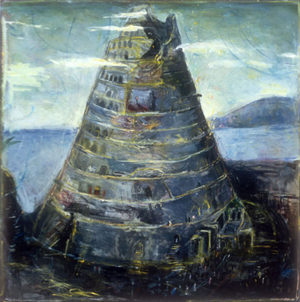 An eight-part Radio Art series by Sarah Washington exploring the roots of language, communication and consciousness. The spoken text used as the basis for these pieces is the biblical story of The Tower of Babel from Genesis 11:1-9.

The series attempts to break down our understanding of language and challenge our relationship to meaning. The languages referenced include an array of tongues from Ancient Hebrew to Mandarin. Each episode is 3 minutes in length including a short introduction.

Preview Hearing in Tongues episodes one to eight above
To download episodes released throughout June subscribe to the Infrequency podcasts
Broadcast in conjunction with London’s Art Radio station, Resonance 104.4 FM

Towards a universal language of misunderstanding:

Every day we encounter many languages and we generate many understandings. Often we strive for some sort of universal language, yet there is much to gain from the scattering of sense brought on by the destruction of Babel. When we adopt another's native tongue the new language mutates, liquefies our long-held definitions and transforms our consciousness. We are stimulated by our encounters with alien concepts, and are inspired by rich mental spikes of misinterpretation. Due to innumerable cultural factors there can be no honest attempt to realise the pure concept of a universal language. Looking at language differently, the avant-garde have long sought to free words from meaning (and also to alter given meaning). Can we make an honest attempt at a universal language by inviting language to take itself apart? Can an 'art of voices' communicate to the entire human race?

The languages selected for this series of mini-misconstructions were chosen to represent a timeline of the development of modern language. The choice of languages is not universally representative, nor logically ordered. The series begins with Ancient Hebrew, and encompasses a number of European languages, with an added sprinkling of Mandarin. Perhaps the most surprising language here is Romansh, which is a corruption of Latin still alive in various forms along the valleys of the Graubünden area in the east of Switzerland.

The work is licensed under a CC License Attribution-NonCommercial 2.0 UK: England and Wales