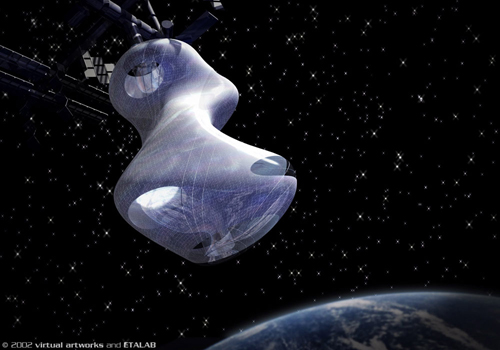 In order to fulfil their mission to extend access to British and International modern and contemporary art, the Tate Trustees have been considering for some time how they could find new dimensions to Tate's work. They have therefore determined that the next Tate site should be in space. At this stage a number of practical aspects of the project are being tested and an early pre-opening programme is being taken forward. This will clearly continue the Tate tradition of innovation and exploration, and provide a radical new location for the display of the Collection and for educational projects. We are very pleased to announce the launch online of our Tate in Space programme.

Is it true that the project has the sanction of Tate's Trustees? Have they determined that the next Tate should be in space? And has the artist Susan Collins actually been taken on as director of the organisation's online programme? ... Tate in Space touches on matters to do with access and social inclusion, interpretation and the search for intellectual and moral authenticity…

Tate in Space - The Imagined

In late 2001 I was invited by the Tate (a museum network in the UK, involving branches in London – Tate Modern, Tate Britain, Tate Liverpool and Tate St. Ives) to propose an online work for their website:

In developing the proposal I considered the organisation itself as the subject for the work, and in particular its re-branding; 'Tate as a consortium' of different venues, rather than 'the' Tate; its colour coded branches, corporate identity, and what it might be about Tate, the institution and the website that I could respond to in a site or situation specific way. The final work Tate in Space emerged as an idea that might give the opportunity to act as a catalyst, an 'agent provocateur' to explore a range of issues and ideas including the nature of cultural ambition.

Excerpt from essay The Actual and the Imagined by Susan Collins, 2004, for the book Networked Narrative Environments, edited by Andrea Zapp, published by Manchester Metropolitan University/MIRIAD in collaboration with FACT Liverpool.

Tate in Space is a replica of Tate Online as it was in 2002, suggesting the fantastical idea of a Tate gallery in outer-space.