Detail from The Status Project - A Terrorist © Heath Bunting 2008

A Terrorist is part of Heath Bunting’s ongoing Status Project, in which the artist plots on a map the information required to make a purchase over the internet in relation to new legislation defined in the UK government’s 2006 Terrorism Act.

The work exposes how easily and comprehensively our movements and activities may be tracked when we provide personal information such as our name, e-mail, postal address or credit card details for even the simplest of internet transactions. Juxtaposing e-commerce records, state surveillance methods and offences outlined in the Terrorism Act, the map prompts us to consider the implications of recent legislation and the significance of discretionary guidelines in their implementation and enforcement.

The Status Project follows on from Bunting’s previous project BorderXing Guide, and looks at how the construction of our ‘official identity’, as a collection of data, influences how we can move around in social space, the internet and private or governmental databases. Bunting started to explore public space as encountered in shops, organisations and institutions in 2005 and to log the information he was obliged to supply in order to use their services. The Status Project is ‘an expert system for identity mutation’ available as an online database documenting more than 5,000 entries. 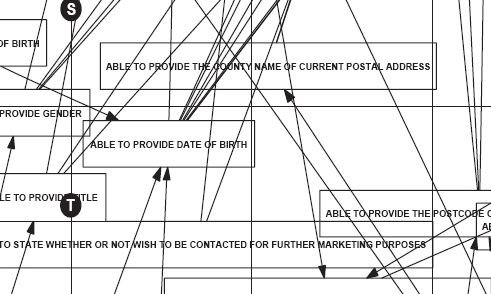 Detail from A Terrorist - The Status Project, c. Heath Bunting 2008

From these data sets, The Status Project evolves into a set of maps and a guidebook, demonstrating the systems that construct our identity in Britain today. It’s an A to Z of the System that maps the conditions and restrictions of everyday bureaucracies – your library card, television licence, rail card or mobile phone contract. Entries are linked to each other according to their overlaps and dependencies indicated as nodes in a vast networked system.

Individual maps propose sets of data arranged according to theme. In the map named A Woman, for example, areas of national identity, credit status and eligibility for state benefits are positioned close together and are dependent on marital status, title and whether or not one has children.

The Status Project has also been realised as custom-made maps based on location, a set of online forms, a print publication collating individual maps into a guide to British bureaucracies, and in the form of psychogeographic walks, where Bunting personally guides members of the public around a city, taking in institutions, shops and public buildings, demonstrating what conditions must be fulfilled in order to engage with the services of each place and what relationships exist between them.

Tate is not responsible for the content of external sites.

The map is available as a PDF and you will need Adobe Reader to view the project. Use the zoom function to examine detail and use the A-Z references to the right of the map in order to pinpoint the position of individual entries.

Net Art commission by Heath Bunting 2002, a prelude to The Status Project

BBC News item outlining some of the controversial issues raised by the governments anti-terrorism proposals, 12 March 2005

From the UK Stature Law Database