In 2004, a cleaner at Tate Britain disposed of part of Gustav Metzger’s Reconstruction of First Public Demonstration of Auto-Destructive Art.  Her mistake was understandable: the bag she threw away did contain rubbish of a kind. When Metzger first demonstrated his techniques of auto-destruction in 1960, he did so by spraying acid onto nylon cloths, triggering a process of beautiful but fatal disintegration and leaving little more than a bag of scraps to be put on display.

Thanks to the actions of Tate’s cleaner, the work did not continue to destroy itself, but was rather more prosaically destroyed: the cleaner was an outside agent, not an integral element of the piece; the work was not so much auto-destructive as, in part at least, destroyed. Or perhaps the work is in fact far more extensive than the labelled installation on display, reaching out into the gallery, the city, its workers, even and especially the cleaner, perhaps herself a migrant who has crossed many borders in order to make this unwitting intervention in the course of Metzger’s work.

Metzger’s interest in auto-destructive art – short-lived creations that contain the seeds of their own destruction, works that really do undo themselves – was developed as a challenge and a creative alternative to the mutually assured destruction of cold war nuclear policy, and also as a rejection of the notion that creativity could exist without a recognition of the horrors of destruction which Metzger – whose entire family was wiped out in German concentration camps – understands only too well. The auto-destructive nature of his work was also an effort to evade capture by the processes of commodification and legitimation at work in the arts. Here too, the themes of flight and the evasion of capture are crucial to his own biography: Metzger arrived in Britain as part of the Kindertransport initiative which brought some 10,000 children into the UK just before the outbreak of the Second World War.

Flights of migrants, the lines they traverse, the crossings they make, the intersections they produce, the systems of surveillance and control they provoke, contest, and break: these themes are all at work in the three works presented as part of this programme.

Ultra-red’s work with the anti-racist campaigning organisation The Monitoring Group is a bold attempt not just to engage with the issues around movement, migration, and race, but to collaborate with those who deal with these problems every day in a move which smudges distinctions between artists and activists. And perhaps because music and sound art are so often ahead of the visual arts, Ultra-red’s attempts to trace the shifting soundtrack of race and anti-racist struggles are intended to give us an insight not just into where things are at today, but where they will be in a tomorrow that, to echo William Gibson, is already here in our midst, if only we know how to tune into it: “we come from your future”, they declare. The western world may have been settled and stable for a few generations, but nothing stays the same for long. We all need to get used to the kind of insecurities, our lifestyles have for so long, exacted from so much of the rest of the world.

People migrate: they are pushed and pulled, driven and drawn across the world, and so are ideas, and words, and meanings and identities, not only through space but through time as well, between different political contexts and ideological atmospheres. But none of these movements are entirely free.

We suffer not from a surfeit of globalisation, but a deficit: capital and goods may move around the world with relative ease, but the movement of people remains heavily policed, and free movement is a privilege afforded only to a very few.As Ultra-red themselves declare: “The free movement of people must be recognized as an aspect of everyday life. Such freedom must be recognized for all people, from sex workers, to agricultural workers, families and lovers seeking reunion, Roma people, political refugees, and not just the sole right of privileged workers of the neoliberal order, like NGO workers, technical elites and cosmopolitan electronic musicians.”

Detail from The Status Project - A Terrorist © Heath Bunting 2008

It has always been thus, to some extent. “In this world, shipmates,” says Captain Ahab in Herman Melville’s Moby Dick, “Sin that pays its way can travel freely, and without a passport; whereas Virtue, if a pauper, is stopped at every frontier.” But as both people and ideas become increasingly interconnected and mobile in practical, technical terms, so their movements become more heavily policed. Visas get harder to obtain; passport controls are supplanted by biometric instruments: it’s written on your face; it’s in your eyes. But what’s on your mind, and in your heart? What do you really have to declare?

At the moment it may help to sport a beard or wear a veil or have an Arabic name, but one does not even have to belong to a targeted demographic in order to find oneself under surveillance or detention. The American artist Steven Kurtz, of Critical Art Ensemble, has spent the last four years defending himself against terrorist charges in the wake of an FBI search of his house for ‘bioterrorist’ materials. Here in the UK, the artist, Heath Bunting has also been detained on suspicion of terrorist activity, hense his motivation to create his recent mapping of the figure of A Terrorist, which traces and challenges the ways in which this figure is constructed and controlled.

The terrorist is one of several identities explored by Bunting in The Status Project, a body of work which draws our attention to the astounding degree to which the citizens of the UK have their lives overseen and their identities constructed by the state bodies and corporations with which they interact. No opportunity is missed for movements to be tracked: purchases are recorded, information is gathered, footage is shot, images are stored. The result is not a monolithic system, but a dynamic and often contradictory mesh of co-ordinates, questions and answers. Amongst the discrepancies Bunting unearths are those between the illegality of promoting terrorism by, for example, wearing a jihadist T-shirt, and the ease with which such an item can be bought. But the real contradictions underlying recent constructions of “the terrorist” run deep. It would be a different question if the laws under which artists like Kurtz and Bunting have found themselves detained were on the books of peaceful and law-abiding states. As it happens, however, they are enforced by states which have defied international law to use violence in pursuit of their own political goals. The very freedoms they claim to protect are precisely those they undermine.

And so the movement of ideas is also increasingly policed. In “Was it like this for the Irish?”, an article published in London Review of Books on 10 April 2008, the lawyer Gareth Pierce explored the extent to which “accepted boundaries of freedom of expression and thought have been redefined” by recent anti-terrorist legislation which, amongst other things, criminalises the possession of information which glorifies terrorism, might be useful to terrorists, or could incite or encourage terrorist activity. These cases, she writes, “are now in effect being prosecuted retrospectively, with the result that our criminal justice system is becoming further distorted as many truly innocent defendants plead guilty, against their lawyers’ advice, terrified by the prospect, as they see it, of inevitable conviction and ever lengthening prison sentences. Thousands of others, all of whom have searched the internet, watch with horror the process of criminalisation and punishment.”  Information may want to be free, but internet searches are not without trace, and “prosecutions are mounted for the ‘possession’ of literature, films and pamphlets bought or viewed on websites, even if that viewing was swift and the item discarded or even deleted.” 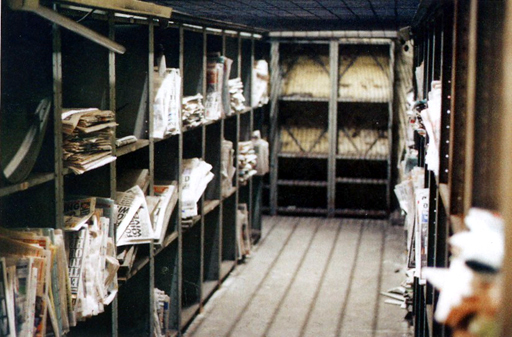 This legislation does at least testify to the power of words and images and the new media in which they swim. This season of Tate’s Intermedia Art programme features a reconstruction of an early Newspaper work by Gustav Metzger,  which also has a lot to say about the power of texts and images as they circulate in this older medium. Re-titled in the present to be Festival of Missed Fits 1962 - 2008, this work has the great distinction of having been excluded from London’s Festival of Misfits in 1962. For all the radicalism of the festival, which was organised by Fluxus, it seems that the contents of Metzger’s work were just a little too edgy: the sheets of newsprint of which it was composed carried controversial coverage of the discovery of Soviet missiles in Cuba.

To be spurned even by the misfits of one’s age is an achievement of which any radical artist can be proud. But the impact of the work has mellowed with age: the themes, which were difficult to handle at the time, provoke little discomfort today. What would be unsettling enough to be excluded from a festival of misfits today? - Coverage of Gaza, or Falluja?  Or do even these horrors seem too remote to make it through the fog of tabloid gossip and celebrity nonsense that clouds the twenty-first century brain? Perhaps we need something rather more immediate, even closer to home, to shock us out of our complacency? Can Ultra-red and Heath Bunting begin to do just this?

Gustav Metzger enacts one of his newspaper works from 1962 which challenges the passive consumption of media imagery, for The Long Weekend 2008.

We Come From Your Future

Sound art series and public encounter by Ultra-red asking: What are the sounds of anti-racism? Part of the Triennial Prologues: Altermodern, Tate Britain 2008.

A Terrorist - The Status Project

Heath Bunting maps the relationships evident between recent legislation, commerce and systems of control as part of his ongoing Status Project.

Top image taken from Public Record, a free archive of recordings and texts produced and supported by Ultra-red