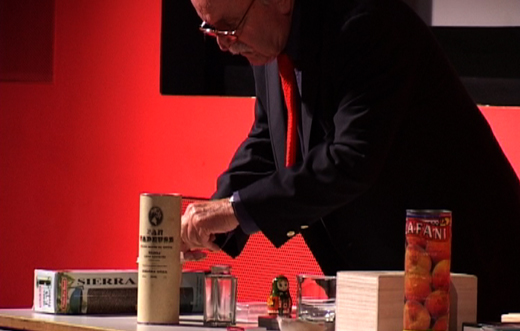 In Memoriam Jon Higgins for Solo Clarinet 1984
An electronically generated pure wave, flowing from a single loudspeaker, slowly sweeps the range of the clarinet. The clarinetist plays long tones across the ascending wave, creating interference patterns - beats of loud sound produced as the sound waves coincide. The speed of the beats is determined by the distance between the waves: the farther apart, the faster the beating. At unison, no beating occurs. At very close tunings – within a few cycles – the patterns may be heard to spin through space.
Clarinet: Andy Harper

Wave Songs for Solo Soprano 1997
Eleven solos for female voice with two pure wave oscillators. An oscillator is a simple electronic device that can be tuned accurately and emit a steady sound for an indefinite period of time. In each solo the oscillators are tuned relative to the size of the waves in one of Lee Lozano's Wave Paintings. Throughout the work the singer sings against the oscillator tones creating audible beats--bumps of sound as the sound waves coincide. I imagine the work as a mini opera, with the singer taking the part of the artist, singing her paintings into existence or perhaps simply humming to herself as she worked on them.
Soprano: Juliet Fraser

Silver Street Car: For the Orchestra: solo triangle 1988
The player dampens the triangle with the thumb and forefinger of one hand while tapping the instrument with the other. The performance consists of moving the geographical locations of these two activities and changing the speed and loudness of the tapping. During the course of the performance, the acoustic characteristics of the folded metal bar are revealed. The title of the work was taken from the Surrealist text, "Instrumentation" (1922), by Luis Bunuel.
Triangle: Ross Parfitt

Opera with Objects 1996
Opera with Objects is one of a series of Lucier's works which explore the resonant properties of everyday objects. One or more performers taps one object which, when coupled with another, produces vivid changes in timbre as well as loudness.
Performer: Alvin Lucier