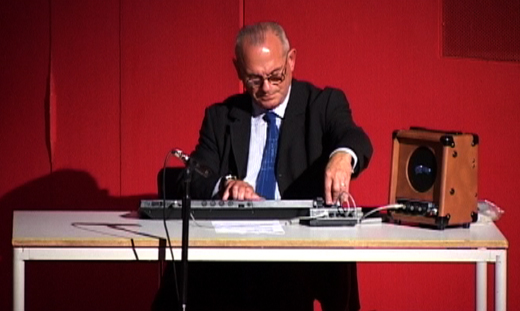 John White is a UK composer and lecturer, born in Berlin in 1936. White has studied Composition, Piano, Trombone, Tuba and Organ. White joined Alvin Lucier on the night of Open Sound Systems to perform Ricecare.

The work was originally composed by White in 1984, as part of an installation at Exhibiting Space by the systemic artist Keith Richardson-Jones. The composition was re-worked for live performance as part of the Open Sound Systems programme. Instrumentation: sequenced material (based on traditional bell-ringing changes) on a Yamaha CX5 Mk2 computer plus element of live performance on a small Yamaha synthesiser (DX100). The performance is affectionately dedicated to the memory of K.R-J. who died earlier this year.