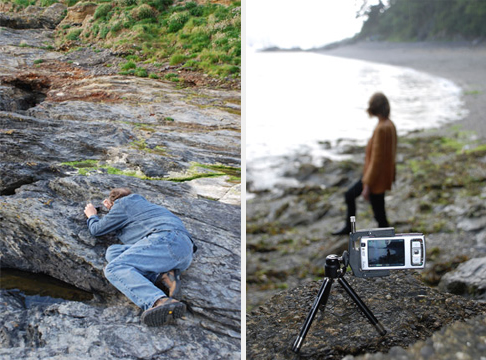 In this interview, Amerika discusses his mobile film project Immobilité and its relationship to previous work,whilst proposing the notion of aYouTube aesthetic and laying out the context for Net Art 2.0

The story of Immobilité revolves around three pirate personas. Existing, as if in another time, looking back. The work critically reflects on the fluidity of emerging identities in digital culture from both philosophical and literary (fictional) perspectives. Amerika mixes landscape, portraiture, mobile videography, poetic intertitles and subtitles, along with an original 75 minute soundtrack, to create a provocative story about a dreamworld within our own world.

Immobilité is the first artwork in Amerika’s Foreign Film Series. Amerika refers to the work as ‘a feature-length foreign film shot entirely on mobile phone.’ Shot in Conrwall in the UK, the work includes an original soundtrack by sound artist Chad Mossholder and introduces Camille Lacadee and Magda Tyzlik-Carver, whose characters go by the name of ‘Etc.’ and ‘…’

Immobilité was produced in collaboration with the University College Falmouth, where Amerika was a visiting artist in residence at iRES in the summer of 2007.

A story about cyberspace, Cabala mysticism, digicash paracurrencies and the evolution of virtual sex in a society afraid to go outside and get in touch with its own nature.

Filmtext is a hybridized online/offline digital narrative created as a net art site, a museum installation, an mp3 concept album, an artist ebook, and a series of live performances.