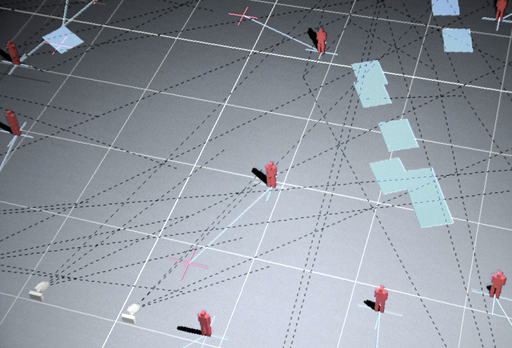 At any one time in the notorious online world Second Life, which features prominently in the video interviews presented here by Lynn Hershman Leeson, tens of thousands of avatars are busy designing their homes, chatting, creating things, building their community. The basis of this world is the sophisticated 3D visualization technology developed by the video and computer games industry for fantasy role playing games like Everquest or World of Warcraft that attract millions of users worldwide. Companies like IBM predict that within the next decade online worlds will expand massively from entertainment into many aspects of everyday life like shopping, education, government and business. They are sometimes seen as “virtual” worlds or simulations, in contrast to the “real” world. These three works commissioned by the Tate explore the crucial issues in this evolution of media and show that what is at stake is much more than a new variation on an old distinction between the real world and images or representations.

What does it mean to operate an avatar, your representative in an online world? Is it you; will it die with you? Media technologies are no longer expensive and, like TV, Radio and the Press, subject to rigorous regulation and control by powerful corporations and agencies. Sharing one’s own videos and media creations is easy in the vast spaces of the world wide web; anyone can go public with their most private moments in a blog, a photo web site like Flickr, or a video site like YouTube; your public avatar and persona may be an entirely different private you. Lozano-Hemmer puts people’s video self portraits in the most material of public spaces — Trafalgar Square, inviting us to encounter the implications. Walczak and Wattenberg reach out to unknown others with participatory “Web 2.0” software and an algorithm to mine the public resources of the web and to create individually customised visions of Utopia.

Certainly many, including the artists here, celebrate the potential of what Lessig, interviewed in Hershman’s piece, calls a creative commons.  A digitally enabled de-territorialization of information is at the heart of this “remix” culture. Vast amounts of cultural, social, and other information, valuable or not, organized or random, information that was once held in specific locations, controlled by restricted circles of specialists or agencies, or simply in the possession of individuals, is now spread far and wide, available for reworking and recirculation, remixed through a few items of information technology.

But there are, of course, dark sides to all this. Not everyone has access to information technology and the internet (though listen to Gilberto Gil). Digital media, with their growing ubiquity and easy management, facilitate a society of surveillance, agencies watching us, merging private and public (the solo authored videos of Under Scan projected into the most surveilled space in the world). Meanwhile powerful interests are making considerable efforts to treat information as private property, to restrict its circulation, to thwart a creative commons and to captalise on controlled creativity. In the new global techno-military-entertainment complex, the biggest investor in simulation and video game technology is the US military.

For too long we have been encouraged to treat media as institutionalized forms, such as Television or the Movies, or with reference to the materials and methods used in the production of a work (oil on canvas, video, print), or in terms of messages and meanings communicated by an author to an audience. The three works in Video as Social Agent challenge such ideas. They are all about location and process: a virtual world, a city square, systems and algorithms for soliciting creative participation in utopia/noplace, my space. They deal in architectures and theaters of encounter, interaction and performance. They suggest that media are as much about modes of engagement between people, ideas, artifacts and settings as they are about the communication of messages or the representation of “reality”. In our information age the irony of digital media is that the task is not so much to read the signal against background noise, to figure out meaning, but to establish the arrangement of interested parties and works, amidst the circuits of distribution, resources and products. Sometimes it is hard enough to simply find stuff.

In this political economy of new media we are presented with various roles for the artist: they may act as prompt, instigating artwork; they may be commentator or critic, standing back to generate insight; above all, perhaps, they may act as dramaturg or scenographer, setting up arrangements and assemblages so as to enhance this popular digital poetics of collaborative cocreation.

This performative space is indeed about social agency — the ability of individuals and communities to effect changes that matter, to exert influence, to be represented, to be the agents at the root of the creation of values and goods. Radical distinctions between real world and virtual world, between reality and representation are secondary matters, because we have always lived in mixed realities constituted by imagination. Our individuality has always been negotiated in terms of others — we are our relationships with others. For as long as we have been human we have presented avatars to the world, proferred representations of ourselves, memories of who we were, stories of what we are, dreams of what we could be, worlds that we might build together.

The Desert of the Digital