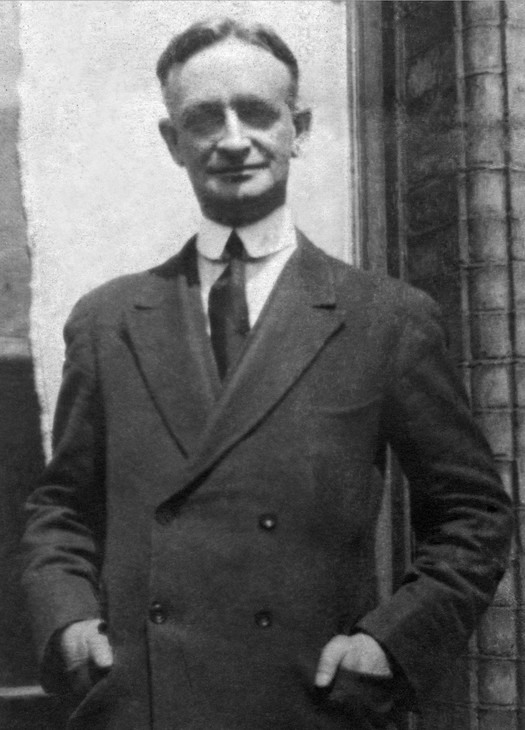 Malcolm Drummond c.1925
Courtesy of the McIntyre family
Fig.1
Malcolm Drummond c.1925
Courtesy of the McIntyre family
Malcolm Drummond, born on 24 May 1880, was the son of an Anglican vicar, and grew up at Boyne Hill, near Maidenhead in Berkshire (figs.1 and 2). His schooling was undertaken at a preparatory school in Henley and the Oratory School in Birmingham. An academically promising student he graduated in 1902 with a degree in history from Christ Church, Oxford, and seemed set to follow a secure career as an estate manager for Lord Feversham of Duncombe Park in Yorkshire. Throughout his studies, however, Drummond had indulged his passions for music and painting and in 1903 made the brave decision to abandon his job after only a year and commit his life to art. He commenced his training at the Slade School, studying there for four years, and then took classes at the Westminster School of Art. Like so many other students who passed through that institution, he was taught by the man who was to have the most significant influence on his development as an artist, Walter Richard Sickert. In 1910 the thirty-year-old Drummond became one of the first pupils at Sickert’s new art school, Rowlandson House. Little of his painting is known from before this time and since his works are rarely dated, his precise development is difficult to establish. 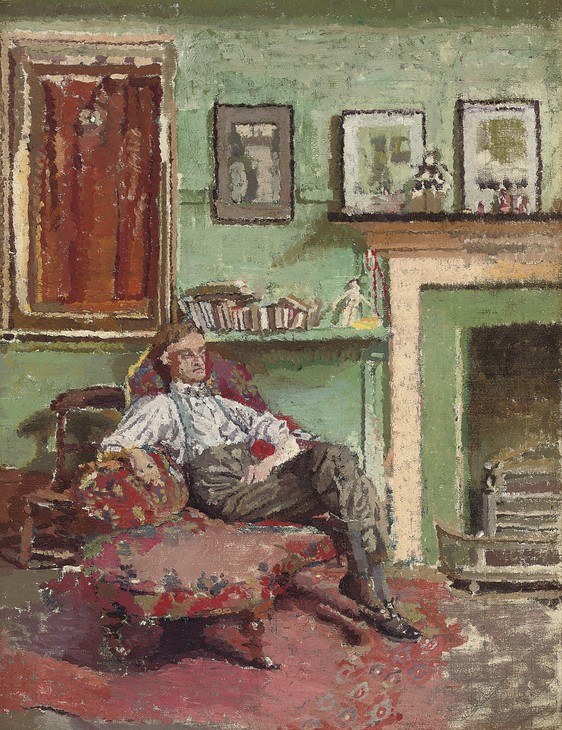 Malcolm Drummond 1880–1945
Self-Portrait c.1908–11
Oil on canvas
Private collection
© Estate of Malcolm Drummond
Photo © Christie’s Images Limited 2011
Fig.2
Malcolm Drummond
Self-Portrait c.1908–11
Private collection
© Estate of Malcolm Drummond
Photo © Christie’s Images Limited 2011
In 1910 Drummond exhibited at Frank Rutter’s Allied Artists’ Association, and thus became absorbed into the gatherings and activities of the Fitzroy Street Group, which he recorded in an oil painting, 19 Fitzroy Street c.1913–14 (Laing Art Gallery, Newcastle).1 He was an intelligent, sociable addition to the group and remained on particularly friendly terms with Sickert throughout his life. Like his former teacher he enjoyed intellectual debate and as well as being a prolific letter-writer, he contributed a regular column to the Scotsman on a variety of subjects. He also built up close friendships with the Bevans, Spencer Gore and with Charles Ginner whose portrait he painted in 1911 (Southampton City Art Gallery).2 When the decision was taken to form the Camden Town Group in the same year, it was Ginner who proposed Drummond for membership.3 Drummond exhibited at all three Camden Town Group exhibitions in 1911–12. He also submitted work to the Salon des Indépendants, Paris, in 1913 and subsequently joined the London Group as a founder-member, exhibiting with them regularly in 1913–32, and holding the post of treasurer in 1921.
Unlike many of Sickert’s other followers and friends, Drummond was not an inhabitant of the Camden Town area, preferring to live and work further south in Chelsea. He shared his studio with his wife and fellow artist, Zina Ogilvie (1887–1931, figs.3 and 4), who is best remembered for her woodcut illustrations to A General History of the Pirates (1925), edited by Sylvia Gosse’s brother, Philip. She was also a talented musician and concert pianist, performing at the Wigmore Hall.4 Several portraits of her by Drummond are known and Sickert also depicted her in an informal sketch which he presented to Clive Bell who was known to have admired her.5 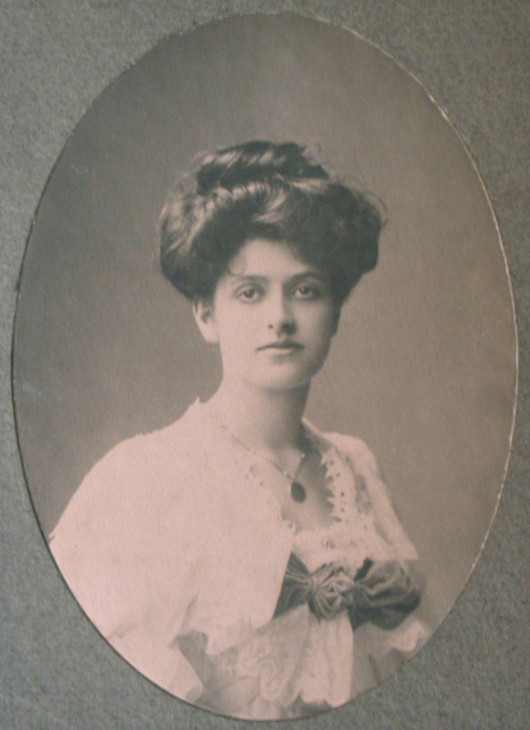 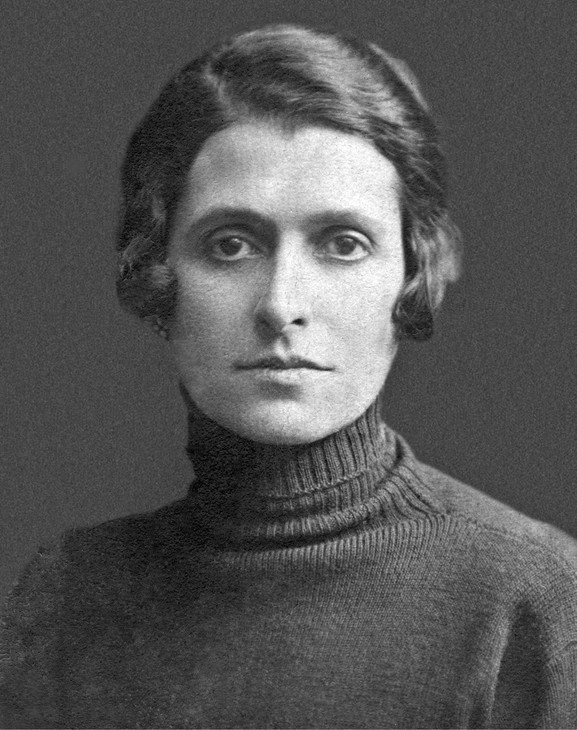 Zina Drummond c.1925
Courtesy of the McIntyre family
Fig.4
Zina Drummond c.1925
Courtesy of the McIntyre family
Drummond followed his Camden Town colleagues’ interest in depicting scenes of everyday life and domestic interiors, and many of his paintings from this period show London streets and landmarks, for example Brompton Oratory c.1912 (fig.5), St James’s Park 1912 (fig.6) and Backs of Houses, Chelsea c.1914 (Southampton City Art Gallery).6 His method of painting from a series of preliminary sketches reveals the teaching instruction of Sickert but, unlike many others who absorbed that master’s principles, Drummond was sufficiently accomplished to develop his own painterly techniques, quite independent from the style of the Sickert School. He often chose to portray his subjects from ambitious and unusual angles, and his paintings are characterised by simplified structures and forms. He liked to use bright decorative colour, described by the critic of the Pall Mall Gazette as ‘gaudy tints’,7 applied thickly but in clearly defined patches, and with a strong sense of design. Malcolm Drummond 1880–1945
St James's Park 1912
Oil paint on canvas
725 x 900 mm
Southampton City Art Gallery
© Estate of Malcolm Drummond
Photo © Southampton City Art Gallery, Hampshire, UK / The Bridgeman Art Library
Fig.6
Malcolm Drummond
St James's Park 1912
Southampton City Art Gallery
© Estate of Malcolm Drummond
Photo © Southampton City Art Gallery, Hampshire, UK / The Bridgeman Art Library
Following a five-year break from painting, while he was engaged in work for the War Office, Drummond embarked in 1920 upon a period of intense creativity which Quentin Bell has identified as the most interesting and prolific of his career.8 During this time he continued to favour subjects that revealed the day-to-day lives of groups of ordinary people observed in places such as Chelsea Public Library, the law courts at the Old Bailey and the Hammersmith Palais dance hall. The 1920s also brought him a number of other new opportunities. In 1922 he received a commission from Canon John Gray for an altarpiece, Christ of the Pentlands, at St Peter’s Roman Catholic Church in Edinburgh. The painting, which is now no longer hanging in situ, reflected not only Drummond’s religious beliefs (he had converted to Catholicism while at school) but also his modern attitude, as he chose to depict the figure of Christ seen against a background of the Blackford and Pentland Hills, the view from Canon Gray’s study.9 In 1926 he also completed fourteen paintings illustrating The Stations of the Cross for the Church of the Holy Name in Birkenhead. These have subsequently been removed from the church and are now in a private collection. From 1921–31 Drummond followed in the footsteps of his former mentor, Sickert, and taught classes at the Westminster School of Art.
Following the death of his wife in 1931, Drummond moved to Moulsford in Berkshire and was married again a few years later to a family friend, Margaret Triquet Browning. In 1937 he lost the sight in one eye after an accident, and in 1943 became totally blind. He died two years later in relative obscurity having never held a solo exhibition during his lifetime. The London Group, where he had shown work until 1929, included a small memorial display in their 1945 exhibition. Since that date a number of exhibitions have been held which have helped to re-evaluate Drummond’s work, most notably by the Arts Council in 1963–4 and the Maltzahn Gallery, London, in 1974. A number of public collections hold examples of Drummond’s work, including Southampton City Art Gallery and the Ashmolean Museum, Oxford. In addition to two paintings, Tate Archive contains a large number of drawings, sketchbooks and etchings. In 2000, a Drummond display was held at Southampton City Art Gallery in collaboration with Camden Fine Art, featuring previously unseen drawings from the artist’s estate.