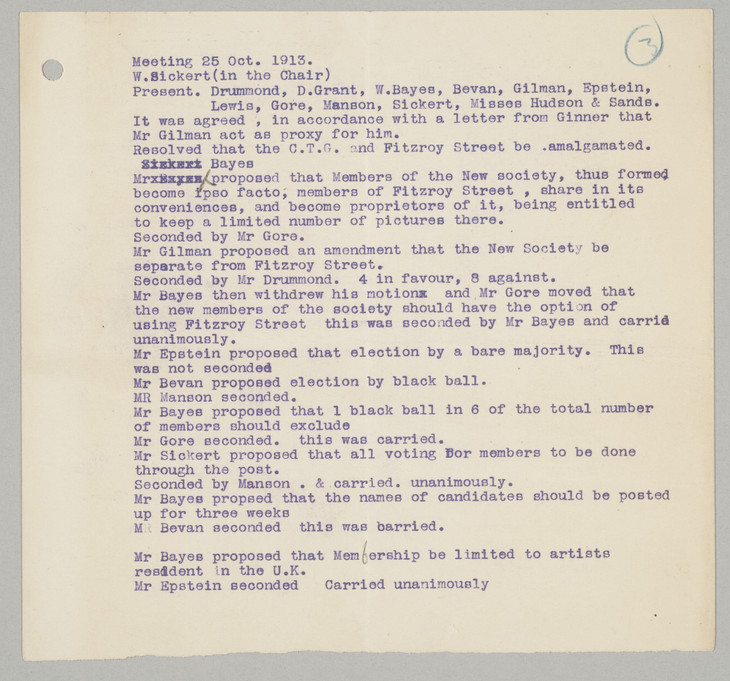 [Handwritten:]
Meeting 25 Oct. 1913
W. Sickert (in the Chair)
Present. Drummond, D. Grant, W. Bayes, Bevan, Gilman, Epstein,
Lewis, Gore, Manson, Sickert, Misses Hudson & Sands.
It was agreed, in accordance with a letter from Ginner that Mr Gilman act as proxy for him.
Resolved that the C.T.G. and Fitzroy Street be amalgamated.
Mr Bayes proposed that Members of the New society, thus formed, become ipso facto, members of Fitzroy Street, share in its conveniences, and become proprietors of it, being entitled to keep a limited number of pictures there.
Seconded by Mr Gore.
Mr Gilman proposed an amendment that the New Society be separate from Fitzroy Street.
Seconded by Mr Drummond. 4 in favour, 8 against.
Mr Bayes then withdrew his motions and Mr Gore moved that the new members of the society should have the option of using Fitzroy Street[.] this was seconded by Mr Bayes and carried unanimously.
Mr Epstein proposed that election by a bare majority. This was not seconded.
Mr Bevan proposed election by black ball.
MR Manson seconded.
Mr Bayes proposed that 1 black ball in 6 of the total number of members should exclude
Mr Gore seconded. this was carried.
Mr Sickert proposed that all voting for members to be done through the post.
Seconded by Manson. & carried. unanimously.
Mr Bayes propsed [sic] that the names of candidates should be posted up for three weeks
MR Bevan seconded[.] this was carried.
Mr Bayes proposed that Membership be limited to artists resident in the U.K.
Mr Epstein seconded[.] Carried unanimously