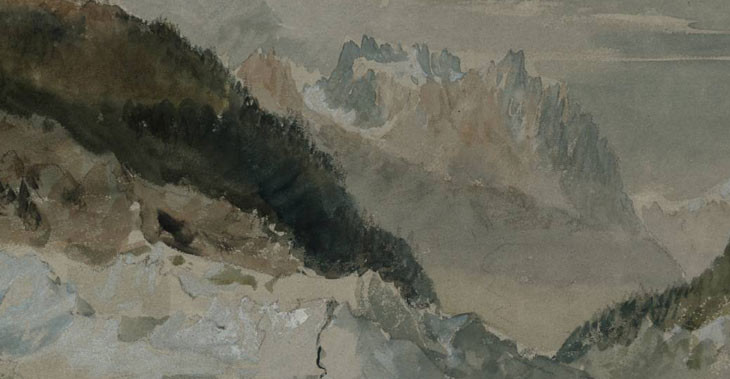 The early years of the new century saw Turner rise to the top of his profession, elected Royal Academician in 1802 and made the Academy’s Professor of Perspective in 1807. Highlights of this section are illustrations, ranging from diagrams to elaborate architectural subjects, made for lectures given from 1811. Increasingly used for note-taking as well as drawing, his sketchbooks bear witness to his research into the history and theory of perspective and in many other fields, as he sought to broaden his education as befitted his new standing. Many contain passages of verse, showing the literary aspirations and influences that complemented his artistic output.
From a transformative visit to France and the Swiss Alps in 1802 came an outstanding body of work, ranging from studies after pictures in the Louvre in Paris to views of mountain scenery. Some of his most impressive early sketchbooks were used on this tour but he also made large independent studies, some of them coloured. Sketchbooks used beside the Thames from 1805 show a light touch with watercolour and pronounced naturalism in the depiction of rustic and river scenery, juxtaposed with interpretations of the same subjects as classical landscapes or seaports. Monochrome-wash drawings for Turner’s series of prints, the Liber Studiorum (from 1806), show his command of the wider conceptual and stylistic range of landscape art.
Richly represented in sketchbooks are regional tours including repeat visits to the north and north-west of England (from 1808) and to Kent and Sussex (from 1810), undertaken for country house portraits and series of topographical prints such as Picturesque Views on the Southern Coast of England. Intermediate colour studies or ‘beginnings’ relate to subjects for engraving and to independent watercolours.
One-off projects tracked in sketchbooks are visits to the naval flagship Victory after her return from the Battle of Trafalgar (1805), to the battlefield of Waterloo during a post-war tour of the Low Countries and Rhineland (1817) and to Scotland (1818) to begin work on illustrating Walter Scott’s Provincial Antiquities of Scotland.