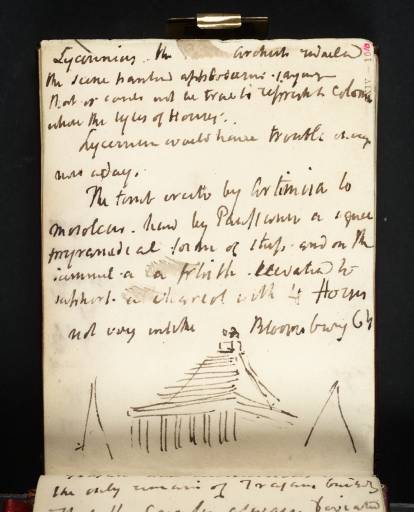 1909
A.J. Finberg, A Complete Inventory of the Drawings of the Turner Bequest, London 1909, vol.I, p.311, CXIV 10, as ‘Notes on architecture’.
1994
Maurice William Davies, ‘J.M.W. Turner’s Approach to Perspective in his Royal Academy Lectures of 1811’, unpublished Ph.D thesis, Courtauld Institute of Art, London 1994, p.290.
The top two thirds of the page, turned vertically, are taken up with the following notes:
Lycinnius the <Painter> Arch[...] re[...]d | the scene painters App[?...durius] saying | that it could not be true to represent columns | upon the tyles of Houses.
Lycinnius would have trouble [...] | [?now adays]
The tomb erected by Artimisa to | Masoleus. had by P[...] a square | pryramidial [sic] form of steps and on the | summit a a [sic] plinth elevated to | support a chariot with 4 Horses | not very unlike Bloomsbury Ch
The passage is the beginning of a short sequence continuing on folio 9 verso opposite (D07972) and concluding on folio 9 recto (D07971). Maurice Davies was unable to identify the source of these notes ‘on ancient sculpture’,1 but they may relate to Turner’s perspective lectures, delivered from January 1811 onwards (see the Introduction to the sketchbook).
The ‘Lycinnius’ notes derive ultimately from the ancient Roman writer Vitruvius. Turner’s direct source is unclear, but a translation of the anecdote is quoted in The Works of James Barry, published in 1809. Barry (1741–1806) had been professor of painting at the Royal Academy; Turner notes a passage of his in the Perspective sketchbook, in use around 1809 (Tate D07435; Turner Bequest CVIII 47). The relevant passage of Vitruvius is as follows in the 1809 version, although it will be noted that Licinius (sic) is referred to as a ‘Mathematician’:
Thus at Thralles, when Apatureus of Alabanda had excellently well painted a scene in the little theatre, ... instead of columns had placed statues and centaurs, supporting the epistylium, the circular roof of the dome, and projecting corners of the pediments, and ornamented the cornice with lion’s heads, all which have reference to the roofing and caves of edifices; above these, nevertheless, in the epicent, domes, porticos, semipediments, and all the various parts of buildings were again painted: wherefore upon the appearance of this scene, when by reason of its enrichment, it was found pleasing to all, and they were ready to applaud the work, Licinius the Mathematician then advanced, and said, “the Alabandines are sufficiently intelligent in all civil affairs, but for a trifling impropriety are deemed injudicious; for the statues in their gymnasium are all in the attitude of pleading causes, while those in the forum are holding the discus, or in the attitude of running or playing with balls; so that the unsuitableness of the attitudes of the figures, to the purposes of the places, throws a public disgrace upon the city. Let us take care that by the scene of Apaturius, we are not deemed Alabandines, or even Aldarites; for who among you places upon the tiles of the roofs of your houses columns or pediments; these things are placed upon the floors, not upon the tiles. If then we approve in painting what cannot be in fact, we of this city shall be like those, who, on account of the same error, are deemed illiterate.” Apaturius dared not to reply, but took down the scene and altered it, so as to be consistent to truth; after which it was approved. I wish the immortal gods would restore Licinius to life, that he might correct this folly and fashionable disfigurement of our stucco work.2
Below the last paragraph of Turner’s notes is a rough ink drawing of the lost Mausoleum of Halicarnassus (or Halikarnassos), built about 350 BC, at what is now Bodrum in Turkey. Statues and relief panels are in the British Museum, London.3 Turner compares the overall structure to ‘Bloomsbury Ch’, meaning the steeple of Hawksmoor’s church, St George’s, which is seen in sketches on folios 63 verso, 64 recto, 66 recto, 67 recto and 76 verso (D08042, D08043, D08046, D08047, D08063), and in Turner’s Royal Academy perspective lecture diagrams ‘6’ (Tate D17115; Turner Bequest CXCV 144) and ‘7’ (Tate D17116; Turner Bequest CXCV 145).
1
Davies 1994, p.290.
2
[Edward Fryer (ed.)], The Works of James Barry, Esq., Historical Painter, London 1809, vol.II, p.623.
3
See ‘Mausoleum of Halikarnassos (Room 21)’, The British Museum, accessed 16 January 2012, http://www.britishmuseum.org/explore/galleries/ancient_greece_and_rome/room_21_halikarnassos.aspx.
Verso:
Blank