Joseph Mallord William Turner Sketches of the Northumberland and North Yorkshire Coast, including Dunstanborough Castle and Views Near Redcar with Roseberry Topping 1822 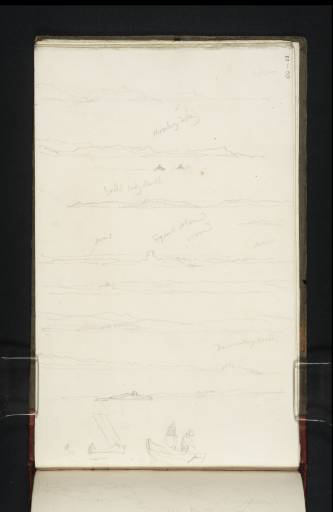 1909
A.J. Finberg, A Complete Inventory of the Drawings of the Turner Bequest, London 1909, vol.I, p.613, CC 83, as ‘Views of coast line. “Dunstanborough Castle,” &C.
1981
Gerald Finley, Turner and George the Fourth in Edinburgh 1822, exhibition catalogue, Tate Gallery, London 1981, pp.86, [225] reproduced as ‘Views of coastline; “Dunstanborough Castle” etc.’.
With the sketchbook turned to the left, Turner continued recording the east coast of Britain on his return from Edinburgh to London by boat (see folio 78; D17644). Continuing from folio 82 verso (D17653), at the bottom of this page is sketched the Northumberland coast, and above are sketches of the coast around the mouth of the Tees.
Towards the bottom of the page are two sketches of ‘Dunstanborough Castle’, the lower one from the north and the one above from the south. Both sketches were taken from a distance and are limited to a few lines, capturing the shape of the castle as it appears in its landscape. There are detailed sketches of the castle on folio 82 (D17652).
The third coastline up is presumably south of Dunstanborough, if Turner used this page consistently from bottom to top, and may include a village or town at its centre-left, perhaps somewhere like Howick with the Cheviot Hills beyond.
In the centre of the page are two sketches of coastlines with castles. The bottom, assuming we are by now a little further down the coast, could be Warkworth Castle, although the sketch above looks less like it and may be the same site. The inscriptions on this sketch do not provide an explanation either. They appear to refer to an ‘island’ and perhaps two beaches (‘sand’) and possibly a ‘mound’.
The top two sketches are identified by inscriptions and both show the coast just south of the mouth of the Tees with ‘Redcar’ at the right. The distinctively shaped ‘Roseberry Topping’, a hill about seven miles south of Redcar, has been labelled in the second sketch. This drawing also features in the foreground two black shapes that could be dolphins of porpoises, which can be seen off the Northumberland and North Yorkshire coast.1 Beneath this is an illegibly inscribed sketch that may show the headland north of Tees Bay and Redcar around Hartlepool.
At the bottom of the page is a sketch of two small boats, one with a sail up, and the other without, but with what appears to be two figures fishing.