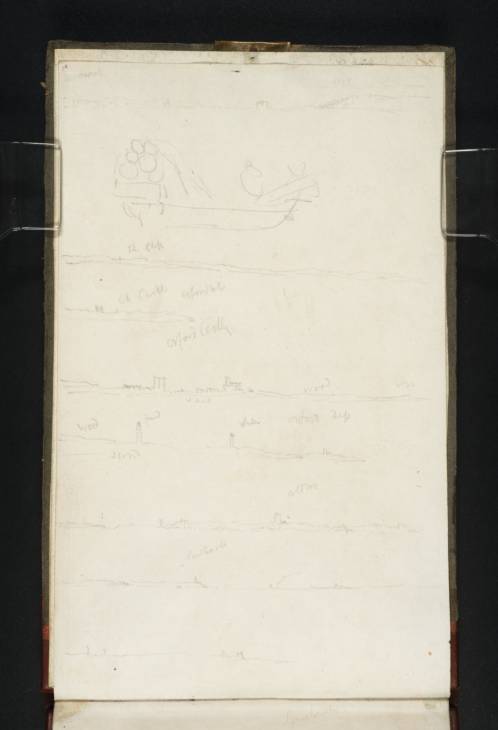 1909
A.J. Finberg, A Complete Inventory of the Drawings of the Turner Bequest, London 1909, vol.I, p.610, CC 1a, as ‘Views of the Suffolk coast from the sea, “Orford Castle,” “Orford,” “Aldbro’,” “Southwold.”’.
1981
Gerald Finley, Turner and George the Fourth in Edinburgh 1822, exhibition catalogue, Tate Gallery, London 1981, pp.81, [90] reproduced as ‘Views of Suffolk coast form the sea; “Orford Castle”, “Orford”, “Aldbro”, “Southwold”’.
While travelling to and from his destinations Turner always took the opportunity to look out for interesting locations, and new visual experiences. His first sea journey to Edinburgh (apparently aboard a Collier Brig)1 therefore afforded him a novel experience, not only taking him to new parts of the British coast, but, by allowing him to see them all in just a few days, to connect them up into a detailed mental map and sketched record (see folios 1 verso–3 verso, 4 verso, 5, 7 verso and 8; D17513, D17515, D17516, D17521, D17522). Although the Picturesque Views on the East Coast of England project would not be initiated for another four or five years, the artist was mindful of the opportunity to record so much of the coastline, and his method for doing so reveals his methodical but practical approach.
From South Suffolk to North Berwick Turner made scores of tiny panoramic sketches of the coast, often less than a centimetre high and usually using the full width of the page (about 11 cm with the sketchbook turned to the portrait format); there are often eight or nine sketches to a page. A mile or two of coastline is often represented with just one or two subtly undulating lines, and most landmarks (church towers, lighthouses, windmills, castles) are reduced to the simplest geometric shapes (a square and triangle, a narrow cone, an ‘x’, a few boxes), while the landscape and its landmarks are never generalised. Busy towns such as Great Yarmouth (folios 2 and 2 verso; D17510, D17511), rocky cliffs on the North Yorkshire coast (folio 87; D17662) and new sights for Turner such as Holy Island (folio 4 verso; D17515) warrant more attention with numerous drawings from different angles and more architectural and topographical detail. Novel and impressive phenomena, such as a sunrise over the water (see folio 3; D17512) or a glimpse of dolphins, (folio 83; D17654) are also recorded with zeal.
Working forwards through the sketchbook and down the page as he journeyed north, and again towards the end of the book on his return south (though there are enough exceptions to make this a trend rather than a rule), his recorded journey begins on the present page with views along the Suffolk coast.
The nine sketches on this page were all made with the book turned to the right. At the top, assuming that this is south of Orford (depicted below), may be a view of ‘Harwich’ with the entry to the Stour and Orwell rivers and Felixstowe on the right. The structure in the centre may be Harwich Redoubt, a Napoleonic fort at the south of the estuary.
It is not surprising that so close to a busy port Turner has interrupted his sketches of the coast to draw this second sketch, a barge laden with barrels at its stern and a figure at the bow.
The low-lying ‘R[ed] Cliffs’ of the third sketch are typical of the rather featureless Suffolk coast. This may depict the area around Bawdsey, between Felixstowe and Orford.
There follows three sketches of Orford Ness, the ten-mile shingle spit between Shingle Street and Aldeburgh. The first sketch is a view of Orford from the south-west looking across ‘Orford Ness’ towards the twelfth-century ‘Or[ford] castle’.
‘Orford Castle’ and St Bartholomew’s Church both feature in the second sketch, the fifth from the top, which also shows the rooftops of the village. This view from the east has been inscribed to indicate the beach (‘sand’) and ‘wood[s]’, and with another obscure note (‘ww’), indicating Turner’s interest in the topography of the area.
The final sketch, inscribed ‘Orford Ness’, shows the ‘Red’ and white striped Orfordness lighthouse, and another ‘white’ lighthouse to its north towards Slaughden. The parish church of St Peter and St Paul at Aldeburgh can be seen in the distance to the right, and inscriptions note the ‘wood[s]’ and ‘sand’.
Aldeburgh, seen from the east, is shown in the seventh sketch with the church as its most distinguishing feature. Windmills and perhaps masts can be seen at the left towards Slaughden in the south. Incidentally, Aldeburgh’s most famous resident at the time, the poet George Crabbe, was staying with Sir Walter Scott in Edinburgh at the moment when this sketch was made.2
The penultimate sketch takes us further north again to ‘Southwold’, which is seen here from some distance to the south-east. Before its lighthouse was built its only distinctive landmark from this distance was St Edmund’s Church. The towers to the right may be the church at Reydon and the ruins of the impressive west tower of St Andrew’s at Covehithe. The sketch at the bottom of the page may depict the same two structures from a little closer to.
There are further sketches of Southwold on folio 2 where Turner’s journey up the East Anglian coast continues.