Joseph Mallord William Turner Vignette Sketch for 'The Temptation on the Mountain', for Milton's 'Poetical Works' circa 1834 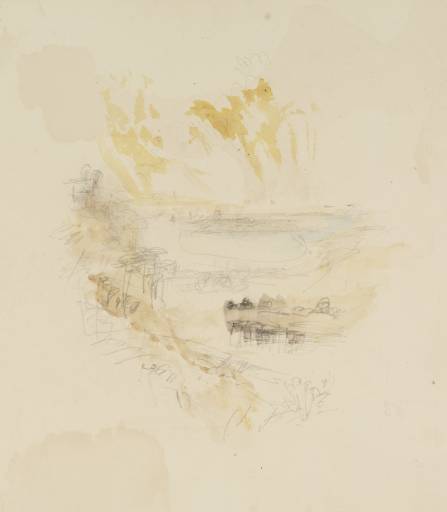 1909
A.J. Finberg, A Complete Inventory of the Drawings in the Turner Bequest, London 1909, vol.II, p.896, as ‘Lake scene’.
1993
Jan Piggott, Turner’s Vignettes, exhibition catalogue, Tate Gallery, London 1993, p.87 no.34, reproduced, p.96, as ‘Study for “Temptation on the Mountain”.
Accepted by the nation as part of the Turner Bequest 1856
This small vignette is a study for The Temptation of Christ on the Mountain circa 1834 (Sterling and Francine Clark Art Institute, Williamstown, Massachusetts),1 a watercolour illustration which Turner produced for Egerton Brydges’s edition of The Poetical Works of John Milton, published in 1835. The design, which was engraved by John Cousen, depicts Satan and Christ standing on the brink of a precipice with a landscape panorama laid out before them.2 Jan Piggott has observed that although no related quotation is given in the published ‘Index of Illustrations’, the scene probably reflects the following lines from Book III of Milton’s poem, ‘Paradise Regained’:3
With that (such power was given him then), he took
The Son of God up to a mountain high.
It was a mountain at whose verdant feet
A spacious plain outstretched in circuit wide
Lay pleasant; from his side two rivers flowed,
The one winding, the other straight, and left between
Fair champaign, with less rivers interveined,
Then meeting joined their tribute to the sea.
Fertil of corn the glebe, of oil, and wine;
With herds the pasture thronged, with flocks the hills;
Huge cities and high-towered, that well might seem
The seats of mightiest monarchs; and so large
The prospect was that here and there was room
For barren desert, fountainless and dry.
(John Milton, ‘Paradise Regained’, Book III, lines 251–64)
The study which also shows a wide expanse of landscape framed on one side by the steep slope of a mountain, appears to be a preliminary concept for the finished design. The same curving loop of river dominates the middle ground. The artist has sketched the major features of the composition in pencil, blocking in areas of colour with pale watercolour wash, although the figures of Christ and Satan are missing from the right-hand foreground.
The work is one of three watercolours in Tate’s collection associated with Milton’s Poetical Works (see also Tate D27635, D27597; Turner Bequest CCLXXX 118, 80, and Tate T06500).
1
Andrew Wilton, The Life and Work of J.M.W. Turner, Fribourg 1979, no.1267, reproduced.
2
W.G. Rawlinson, The Engraved Work of J.M.W. Turner, R.A., vol.II, London 1913, no.601. There is one impression in Tate’s collection (T06632).
3
Piggott 1993, p.87.
Technical notes:
The support of this work is London Board, a type of artists’ board available from most colourmen.1 The sheet bears a watermark ‘J Whatman | Turkey Mill | 1834’ and a blind embossed stamp ‘SUPERFINE | [arms of city of London] | LONDON BOARD’ bottom left, inverted.
1
See Peter Bower, Turner’s Later Papers: A Study of the Manufacture, Selection and Use of his Drawing Papers 1820–1851, exhibition catalogue, Tate Gallery, London 1999, pp.114–15.
Verso:
Inscribed by an unknown hand in pencil ‘D27694’ bottom left