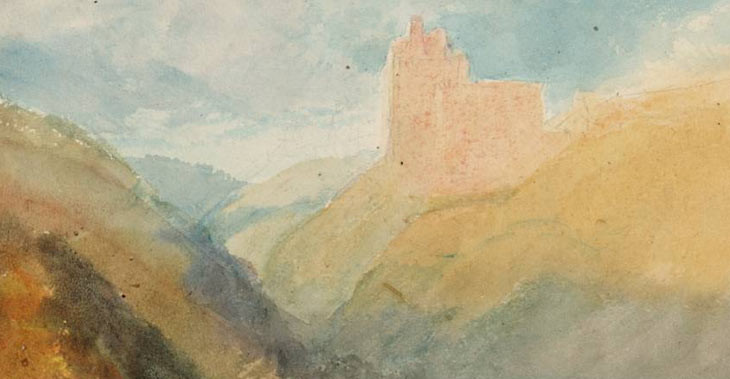 Crichton Castle 1818-19 (from the Scotland and London sketchbook)

Turner’s visit to Scotland in 1818 was made at the prompting of Walter Scott and his publisher Robert Cadell, who had proposed to publish a topographical part-work publication of views with accompanying descriptions of the Provincial Antiquities and Picturesque Scenery of Scotland. The project began an association with the author that lasted until his death in 1832, and with his publisher for several more years. Turner’s subsequent tours of Scotland in 1822, 1831 and 1834 all had a Scott connection. The Provincial Antiquities was conceived as a twelve-part publication, with a two-volume bound edition to follow. It was dedicated to subjects of historical and picturesque interest around East Lothian and Midlothian, with the prospect of further series covering other parts of the country to follow; although, in the event, the series was cut short after ten numbers. Turner contributed ten watercolours to be engraved which he based on sketches made in three sketchbooks used on his tour of Scotland in the ...
Read full entry
Bass Rock and Edinburgh sketchbook 1818
D13322–D13448; D40682–D40684
Turner Bequest CLXV
Edinburgh, 1818, sketchbook 1818
D13449–D13586; D40934–D40937
Turner Bequest CLXVI
Scotch Antiquities sketchbook 1818
D13587–D13654; D13656–D13747; D40913–D40916
Turner Bequest CLXVII
Scotland and London sketchbook 1818–20
D13814–D13858; D40885–D40886
Turner Bequest CLXX

Artworks in this grouping