In Focus
The Girl Chewing Gum 1976 by John Smith

Dalston, Then and Now: An Interview with John Smith 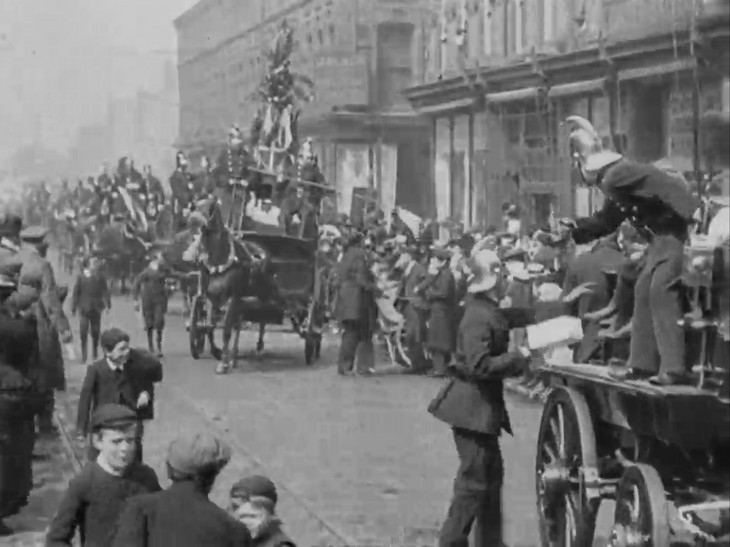 Sagar Mitchell and James Kenyon
Bootle May Day Demonstration and Crowning of the May Queen 1903 (film still)
Fig.1
Sagar Mitchell and James Kenyon
Bootle May Day Demonstration and Crowning of the May Queen 1903 (film still)
While Smith has written that ‘all film is fiction’,1 one might also add that all film (live-action, at least) is documentary. The ‘controlled representations’ Smith has described consist of traces of people and things that have passed before the camera lens.2 At the turn of the twentieth century Sagar Mitchell and James Kenyon’s Lancashire-based film company produced hundreds of actualities: short non-fiction films capturing glimpses of daily life, festivals, parades, factories and – importantly – street scenes in Britain (fig.1). In filming a Dalston intersection for an uninterrupted ten minutes, Smith recalls the work of Mitchell and Kenyon, resuscitating a filmic genre that largely died out with the development of narrative filmmaking in the 1910s. The Girl Chewing Gum may be a ‘creative treatment of actuality’, but it remains actuality nonetheless.
The film’s images were always images of the past in that they are retrospectively described by a voiceover that is revealed to be situated later in time than the images it accompanies. But this notion of retrospective examination becomes even more important today, as The Girl Chewing Gum now appears not only as a reflexive examination of cinematic conventions but also as a document of a neighbourhood that has undergone immense changes since 1976. Smith himself highlighted this aspect of the film in his remake, The Man Phoning Mum 2011 (fig.2). Here, Smith paired the soundtrack of the original with an image-track consisting of colour video filmed at the same location in 2011 and superimposed over the 1976 film. From time to time, he varies the balance of the two images, allowing one or the other to fully inhabit the screen. During the 360-degree pan at the film’s end, subtitles appear: Smith was unable to find the exact location he filmed in 1976 and remarks upon the differences between Letchmore Heath then and now (fig.3).
Fig.2
John Smith
The Man Phoning Mum 2011
High definition video, colour, sound
12 min
Courtesy the artist 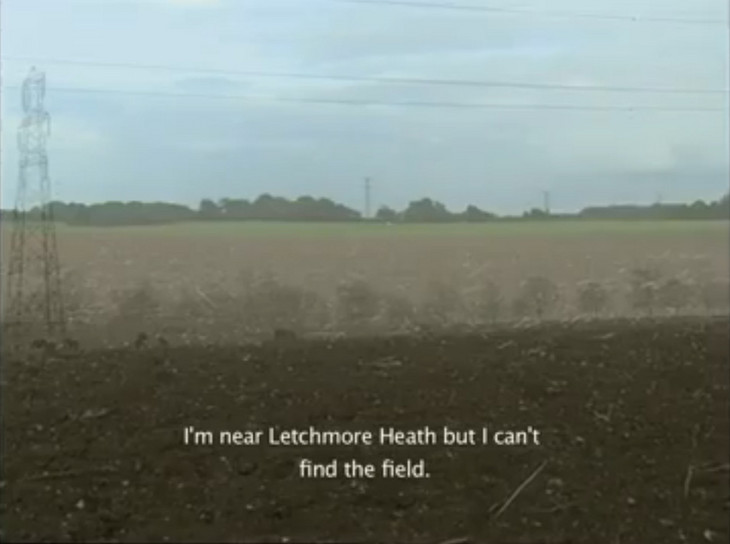 Patrick Wright: What took you to Dalston?
John Smith: I lived there, a few hundred yards from the place that you see in the film. Most of my work is made in places I’m familiar with, often near my house. I lived in Lansdowne Drive then. I later moved away for twenty years and moved back to the area in 2003. It’s interesting how the location of a film becomes more fascinating and significant over time. When I made the film, I didn’t particularly care where the location was. I chose it because it had a cinema and a street clock. I also wasn’t thinking about anything to do with time, or that I would record this place and then later look at it in a very different way. I just wanted an image of an ordinary present-day place, and the most convenient ordinary place I could find was this one.

1
John Smith, ‘Real Fiction’, paper submitted in partial fulfilment of the requirements for Smith’s PhD, University of East London, December 1997, p.10. Courtesy of British Artists’ Film and Video Study Collection.
2
Ibid.
3
See Barbara Jones, The Unsophisticated Arts [1951], Dorchester 2014.
4
Benefits Street is a controversial documentary series that aired in the UK on Channel 4 in January 2015. Over five episodes, it followed the lives of the residents of James Turner Street in Birmingham, where reportedly ninety per cent of inhabitants claim state benefits.

‘Dalston, Then and Now: An Interview with John Smith’, in Erika Balsom (ed.), In Focus: 'The Girl Chewing Gum' 1976 by John Smith, Tate Research Publication, 2015, https://www.tate.org.uk/art/research-publications/john-smith-the-girl-chewing-gum/dalston-then-and-now-an-interview-with-john-smith-r1175942, accessed 20 May 2022.