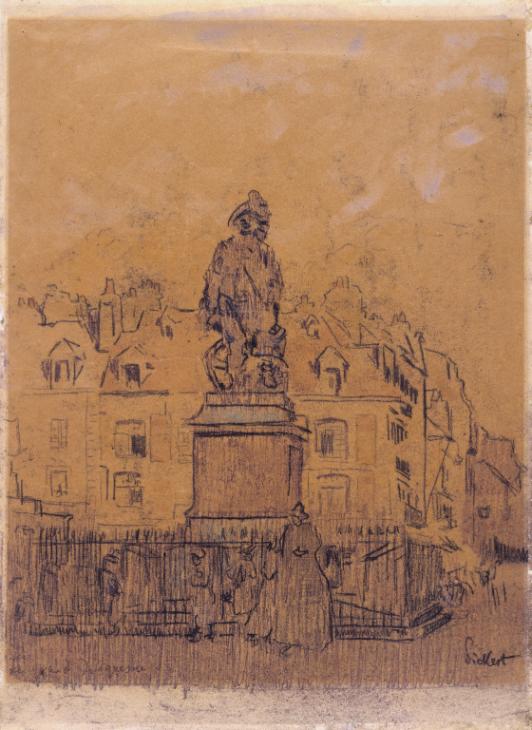 View the main page for this artwork
Walter Richard Sickert, Sketch for 'The Statue of Duquesne, Dieppe' c.1900
This transfer drawing, made using typewriter carbon paper, shows the statue of the naval hero Admiral Abraham Duquesne in the Place Nationale, Dieppe. ‘Le Grand Duquesne’, as it was commonly known, was the work of the French sculptor Antoine Laurent Dantan, whom Sickert admired. This picture shows a frontal view of the monument, flanked by a railing and the outlines of a woman with three or four small children on the pavement in the foreground. The bright watercolour washes applied after tracing have since discoloured with age.
Walter Richard Sickert 1860–1942
Sketch for ‘The Statue of Duquesne, Dieppe’
c.1900
Carbon paper tracing and watercolour on paper
324 x 235 mm
Inscribed by the artist in black ‘Sickert’ bottom right and ‘Le grand Duquesne’ bottom left
Bequeathed by Lady Henry Cavendish-Bentinck 1940
N05096

The Statue of Duquesne, Dieppe is a carbon paper tracing with watercolour on wove paper. The materials, technique and execution are very similar to that of Dieppe, Study No.2; Façade of St Jacques (Tate N05094). The poor quality machine-made paper with cut edges has embrittled and discoloured with age leaving only a trace of the original cream colour and bright tones of the watercolours preserved at the edges of the paper sheet, which were protected by the mount.
The drawing covers the full extent of the paper sheet and the image was created using two different coloured sheets of carbon paper, black and purple. The purple is used in the foreground, across the entire statue and its plinth, and on the far right at the end of the row of buildings. The drawing has the same grainy quality, particularly in the sky area, suggestive of the transfer technique and along the top edge of the work are a number of pinholes, probably made by Sickert using pins to register the papers during the process of duplication. The watercolour washes were applied after the drawing and primarily used in the sky area and to emphasise certain architectural details. The work is signed ‘Sickert’ traced through the carbon paper tracing in the lower right corner and ‘Le grand Duquesne’ is inscribed in brown ink in the lower left corner. 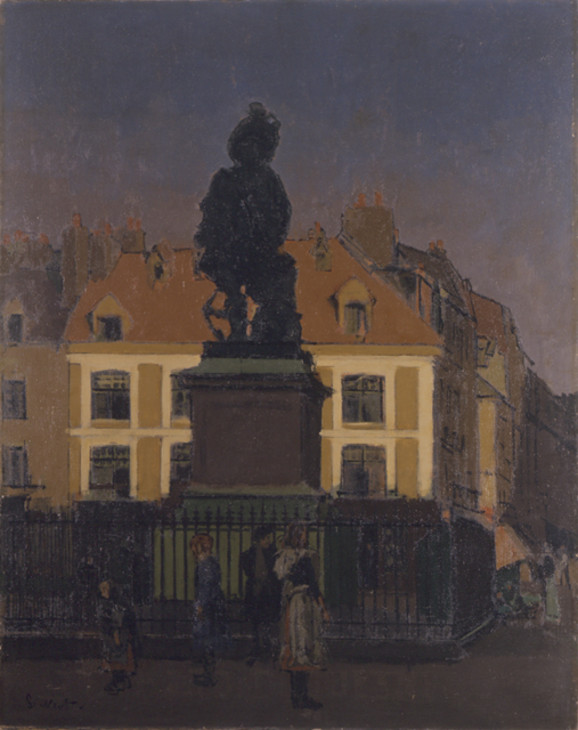 Walter Richard Sickert 1860–1942
Statue of Duquesne, Dieppe 1902
Oil paint on canvas
1316 x 1048 mm
Manchester City Galleries
© Estate of Walter R. Sickert / DACS
Photo © Manchester City Galleries
Fig.1
Walter Richard Sickert
Statue of Duquesne, Dieppe 1902
Manchester City Galleries
© Estate of Walter R. Sickert / DACS
Photo © Manchester City Galleries
The focus of this drawing is a statue of Admiral Abraham Duquesne (1610–1688) which stands in the Place Nationale, Dieppe and is popularly known as ‘Le Grand Duquesne’. A celebrated son of the town, Duquesne had been a distinguished naval hero, most famous for his defeat of the Spanish–Dutch fleet under the command of Admiral de Ruyter in 1676. The monument was the work of the French sculptor, Antoine Laurent Dantan (known as Dantan the Elder, 1798–1878), an artist whom Sickert was supposed to have admired and even collected.1 During Sickert’s permanent residency in the town in the years 1898–1905 the statue became one of his favourite and most oft-repeated subjects, in particular across a series of paintings dating from the period 1899–1900.2 Additionally, he revisited the theme in one of six large-scale canvases commissioned in 1902 by the owner of the Hôtel de la Plage in Dieppe, Monsieur Mantren, as decorations for his restaurant (fig.1).3
Sickert once described Dieppe as his ‘goldmine’ which provided him with ‘a little decent comfort’.4 Following the advice of Ernest Brown of the Fine Art Society who proposed that ‘watercolours sold always like fire’, the artist seems to have tried to capitalise on his repertory of Dieppe views by making ‘tinted drawings’ of many of the same subjects.5 The art historian Wendy Baron has described these works on paper as ‘commercial drawings’, saleable products which were traced from a primary document and quickly worked up into different permutations of the same theme.6 This view of the statue of Duquesne is a transfer drawing made using typewriter carbon paper with watercolour applied over the transferred design. It is not known whether this unusual use of media constituted an innovative form of printmaking (similar to monotype) or whether Sickert was simply experimenting with ways of manufacturing multiple images. The textural, sketchy quality of the line is reminiscent of the artist’s etchings and soft-ground etchings. However, he may also have been influenced by Edgar Degas’s practice of making coloured variations from multiple traced images (see the discussion for Tate N03810).
There is at least one other similar version of the ‘Grand Duquesne’ motif made with coloured chalks instead of pastel and watercolour (Christopher Sands Trust, on loan to the Ashmolean Museum, Oxford).7 Both of these objects closely reflect the composition and design of the 1902 Mantren café commission, as well as a finished oil on canvas, Le Grand Duquesne, Dieppe, which depicts the same frontal view of the statue with the open street in the background on the left,8 and a related sketch on blue paper which appears to be a preparatory study.9 The most noticeable difference between all of these versions is the varying figurative arrangements in the foreground in front of the railings. While the oil paintings contain respectively two tall figures in red with one small girl, or a mixed group of four youngsters, Tate’s drawing includes one adult woman with three or four children. Other images portray the monument from the side, from a greater distance away or from a slightly different angle with the church of St Jacques included in the background.
For other paintings of Dieppe by Sickert see Café des Tribunaux, Dieppe (Tate N03182) and Les Arcades de la Poissonnerie (Tate N05045). Other examples of the carbon tracing technique in Tate’s collection are The Piazzetta and the Old Campanile, Venice c.1901 (Tate N03810) and Dieppe, Study No.2; Façade of St Jacques c.1899 (Tate N05094).