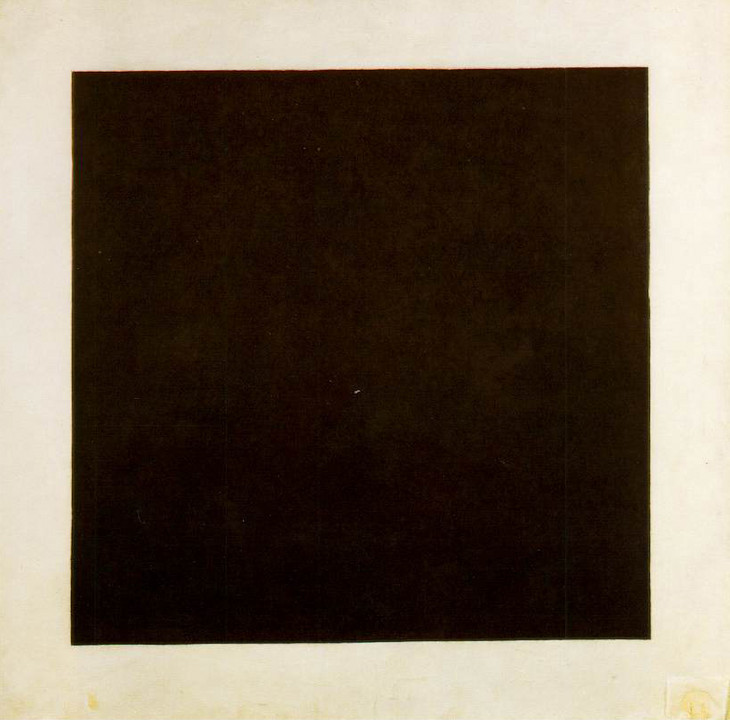 Kazimir Malevich
Black Square 1915
Fig.1
Kazimir Malevich
Black Square 1915
Time has not been kind to Kasimir Malevich’s painting, Black Square (fig.1). In 1915 when the work was first displayed the surface of the square was pristine and pure; now the black paint has cracked revealing the white ground like mortar in crazy paving. In 1916 the artist, in a characteristically bold and provocative mood, declared the square to be the ‘face of the new art ... the first step of pure creation’.1 Malevich gave his ‘new art’ a name, suprematism, announcing a few years later that ‘To the Suprematist the visual phenomena of the objective world are, in themselves, meaningless; the significant thing is feeling’.2
True to these principles, Black Square is radically non-representational. The slab of black paint that dominates the canvas works as grand refusal, repudiating nature in favour of abstraction. As such, the painting may be read in terms of the Kantian theory of the sublime. Favouring flatness over depth, Black Square conveys, in the words of Kant’s ‘Analytic of the Sublime’ (1790), ‘the feeling of displeasure that arises from the imagination’s inadequacy’ in an estimation of ‘formlessness’ or ‘magnitude’.3 The experience of viewing the painting thus involves a feeling of pain brought about by the breakdown of representation followed by a powerful sense of relief, even elation, at the thought that the formless or massive can nevertheless be grasped as a mode of reason. In other words, the failure of the black square to represent this transcendent realm serves ‘negatively’ to exhibit the ‘higher’ faculty of reason, a faculty that exists independent of nature.
The Kantian theory does not, however, fully account for the significance of this work. Malevich himself regarded his minimalistic geometrical forms as the secular equivalents of Russian icons, a form of painting which aspires to present the divine as pure or unmediated reality. This idea is corroborated by a comment from the diary of the artist’s friend, Varvara Stepanova, dating from 1919: ‘If we look at the square without mystical faith, as if it were a real earthy fact, then what is it?’4 There is, however, another way to understand the sacred quality of Black Square. In the course of a comparison between Malevich’s square and the readymade art of his French contemporary Marcel Duchamp, the Lacanian theorist and cultural critic Slavoj ŽižekZizek makes the following observation:
The underlying notion of Duchamp’s elevation of an everyday common object into a work of art is that being a work of art is not an inherent property of the object. It is the artist himself who, by pre-empting the ... object and locating it in a certain place, makes it a work of art – being a work of art is not a question of ‘why’ but ‘where’.5
What Malevich’s painting does is ‘simply render – or isolate – this place as such, an empty place (or frame) with the proto-magic property of transforming any object that finds itself in its scope’, even a black square of pigment, ‘into a work of art’.6 Through its stark distinction between the void of creation (the white background/surface) and the material object (the dark, material stain of the square), Black Square thus ‘expresses the artistic endeavour at its most elementary’.7 As ŽižekZizek goes on to state, the feeling of the sublime is experienced in the tension between the empty or ‘Sacred Place’ and the material object – the artwork – that appears in this place.8
Malevich’s discovery of black abstraction is sustained in American art produced in the aftermath of the Second World War. In black paintings by Robert Motherwell, Ad Reinhardt and Mark Rothko we see a related preoccupation with the fraught relations between darkness and perception, with the obfuscation of vision as a principle of sublime incomprehension.
Philip Shaw is Professor of Romantic Studies in the School of English at the University of Leicester and Co-Investigator of ‘The Sublime Object: Nature, Art and Language’.