This is the first time the Wertheimer portraits are being shown as a standalone group at Tate.

The Wertheimers were a wealthy middle-class Jewish family. Asher Wertheimer (1843–1918), a highly successful London art dealer, commissioned Sargent to paint them. Sargent was the leading portrait painter of the late Victorian and Edwardian elite. The group of portraits form the artist’s largest commission. It is also a unique group as nine of them were donated to the national art collection in Britain. This bequest highlights changes in British society, but also caused controversy.

Asher’s father Samson, also a dealer, settled in Britain in 1830, having fled religious persecution in Germany. Asher built on his success and in 1898, he asked Sargent to paint portraits of him and his wife, Flora, for their 25th wedding anniversary. They became friends and, over the next ten years, the artist painted ten further portraits of the family.

Eight of the portraits were displayed in the family’s dining room, which was nicknamed ‘Sargent’s mess’. Asher bequeathed nine of the paintings to the National Gallery. As he had wished, they were displayed in their own room between 1923 and 1926, then were transferred to the Tate Gallery to feature in a newly built Sargent room.

This large gift was a source of debate, discussed in Parliament by MPs who criticised the family, using antisemitic tropes. The Wertheimers were seen by some as ‘outsiders’ to the British establishment. Traditionally, only aristocratic families commissioned portraits of this scale, for galleries in their stately homes. In the context of rising antisemitism in the 1920s, the reception of the portraits, even when favourable, often betrayed prejudice, stereotyping and racism. Some critics have perceived elements of caricature in some of the paintings, although Sargent’s relationship with the Wertheimer family was one of lasting friendship and mutual admiration.

Hylda was the third daughter of the wealthy art dealer Asher Wertheimer, who had commissioned Sargent to paint twelve portraits of his family. Sargent''s reputation ensured that such portraits were a token of wealth and social standing. The portrait of Hylda is in the grand manner of the old masters, and great care is given to the depiction of the different luxurious textures of her clothing. Sargent tried to dissuade Hylda from wearing her pince-nez, which undermine this illusion, but they were retained at her insistence.

This is one of a series of portraits Sargent was commissioned to make of the family of the art dealer Asher Wertheimer (1844–1918). Sargent befriended the family and Wertheimer helped Sargent obtain commissions. This portrait shows Wertheimer’s eldest daughters, Helena (Ena) and Elizabeth (Betty). Sargent was attracted by the charm of the Wertheimer family, especially the vivacity of Ena (right), something which is clearly revealed in this portrait. The different textures of the sisters’ dresses are skilfully evoked, the rich depth of Betty’s red velvet contrasting with the shine of Ena’s white damask.

These three Wertheimer children were painted in the schoolroom of their home at 8 Connaught Place, London. Essie (aged 22) is presented as an adult, seated slightly detached on the sofa with a small dog on her lap. Her younger siblings, Ruby (aged 12) and Ferdinand (13), lean more informally across an ottoman, dressed in clothes typical of the upper classes at this time.

Despite the naturalness of the grouping, certain critics disliked the atmosphere of privilege. The Spectator observed 'Here the pet dogs are bedecked with bows, and the air we feel smells of scent and burnt pastilles'.

This is a portrait of three of the children of the art dealer, Asher Wertheimer. It is is one of a series of twelve that Sargent painted of the Wertheimer family. The stone terrace and urn in the background recall the style of eighteenth - century portraiture in the grand manner designed to confirm aristocratic status. Here, the tradition is adopted by a wealthy, middle-class Jewish family. The riding habit and crop worn by Almina (on the right) and the spaniel with Conway (in the centre provide) also refer to aristocratic pursuits.

This painting was the last in the series of Sargent’s portraits of the Wertheimer family. Almina was Asher Wertheimer’s fifth daughter. She is shown in an exotic, ‘oriental’ costume, including an ivory-white Persian dress and a turban entwined with pearls. The white and green over-jacket was a studio prop and the musical instrument (the sarod from northern India) was owned by the artist. Such fantasy images of European women cast as alluring ‘orientals’ were highly fashionable at the turn of the twentieth-century.

This portrait of Ena Wertheimer is one in a series of twelve that Sargent painted of her family. Its shows her playfully wearing the uniform of the Order of the Garter of the British monarchy. At the time the Order only admitted men, apart from the queen. The Italian subtitle translates as ‘in full sail’, referring to her billowing outfit. To create the illusion of motion and suggest the presence of a sword, Sargent asked Wertheimer to hold a broomstick underneath her cloak. It can be seen sticking out on the right. 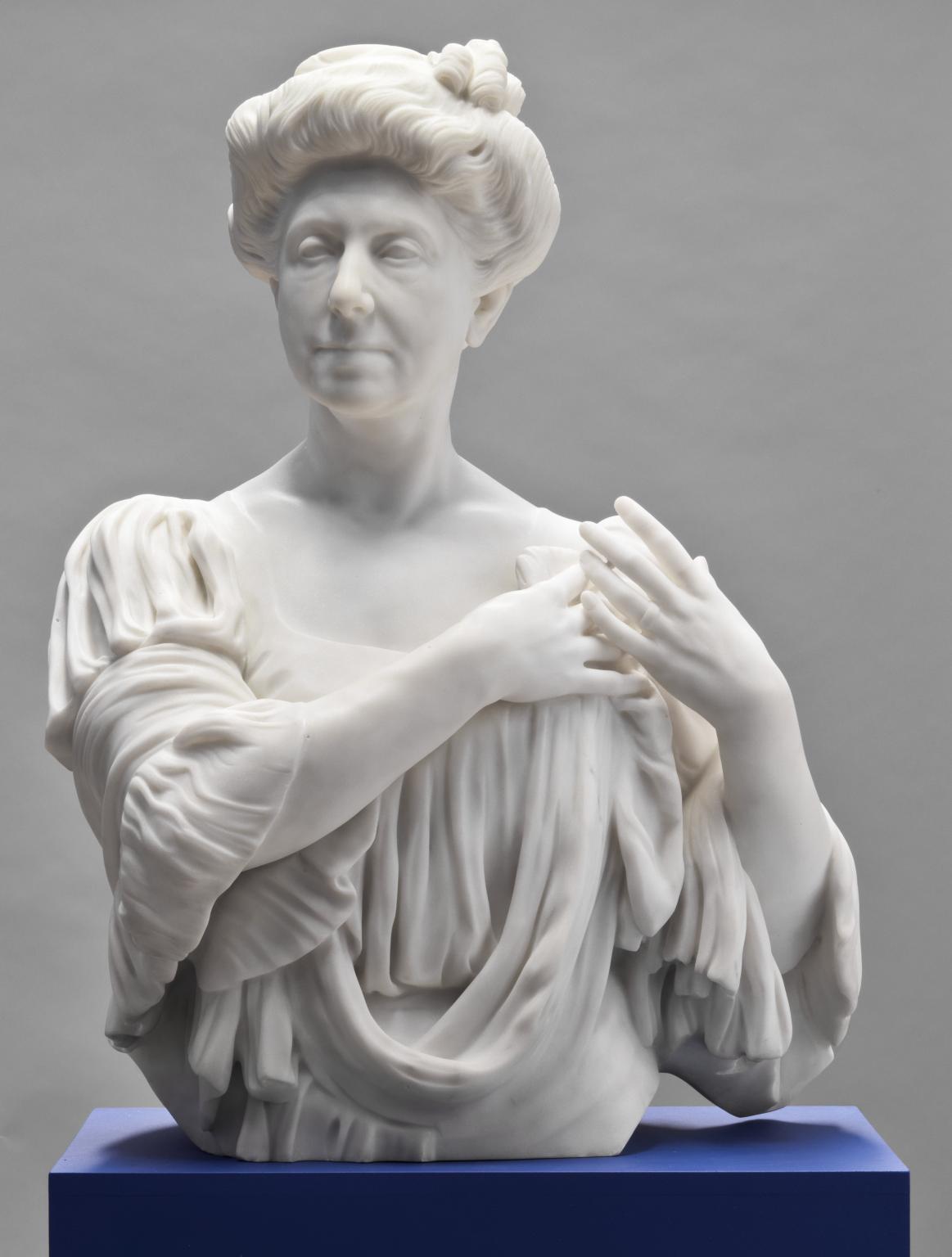 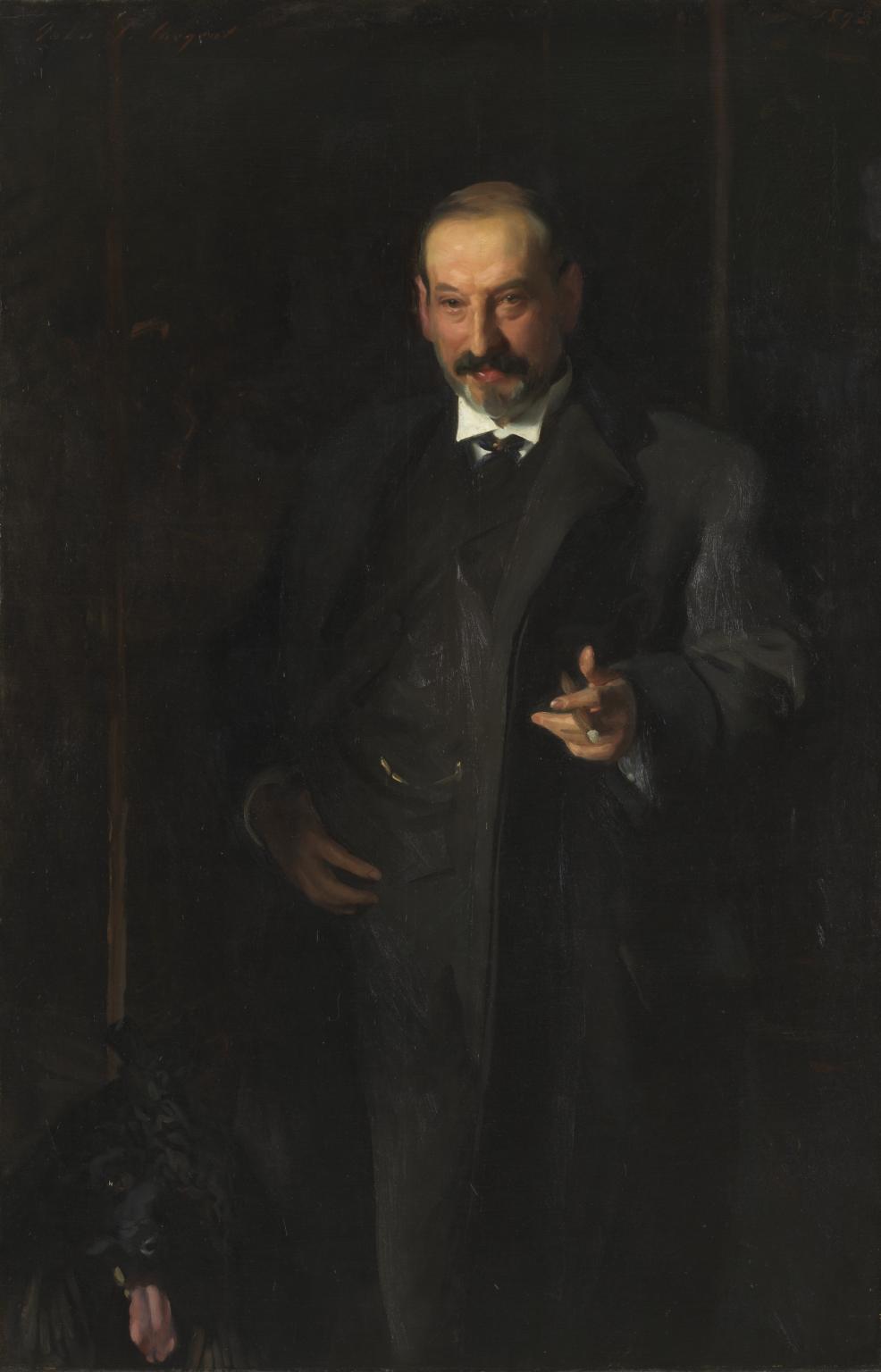 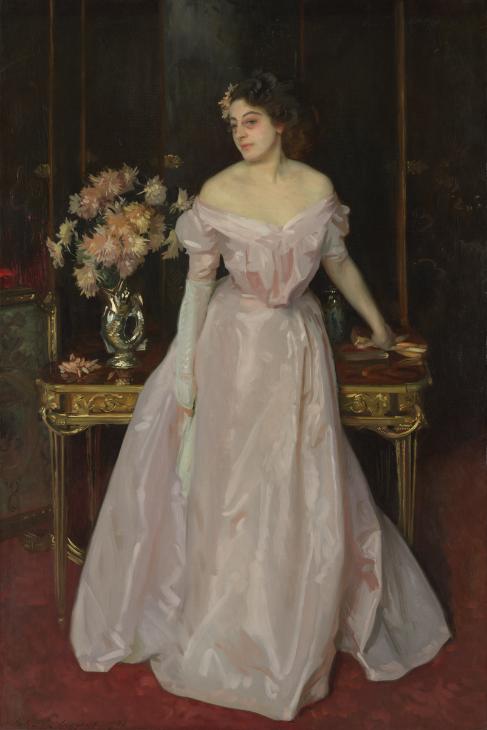 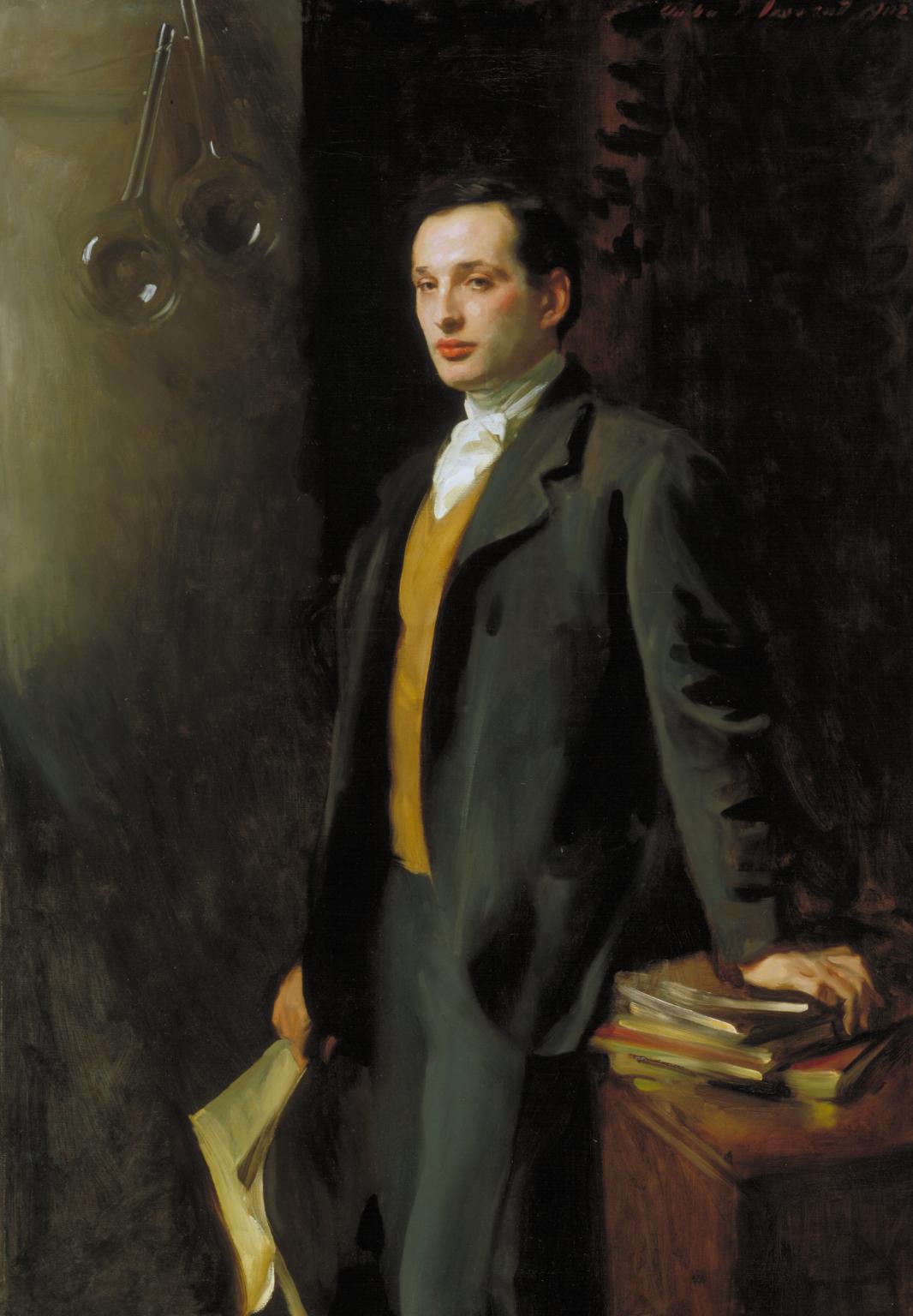 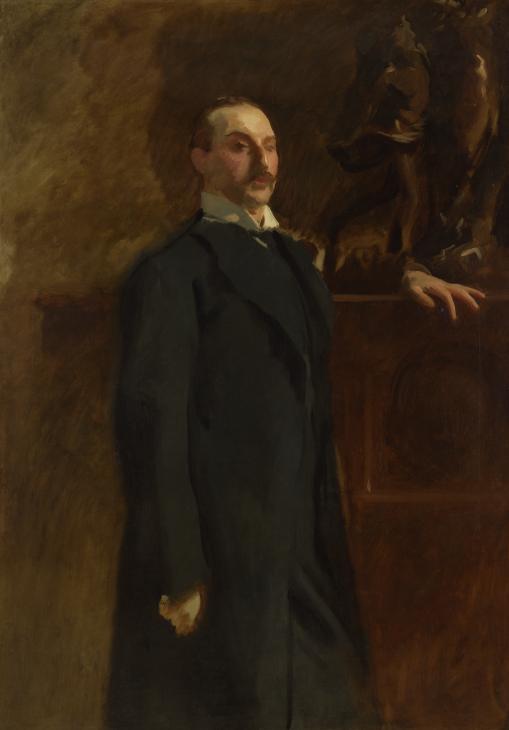 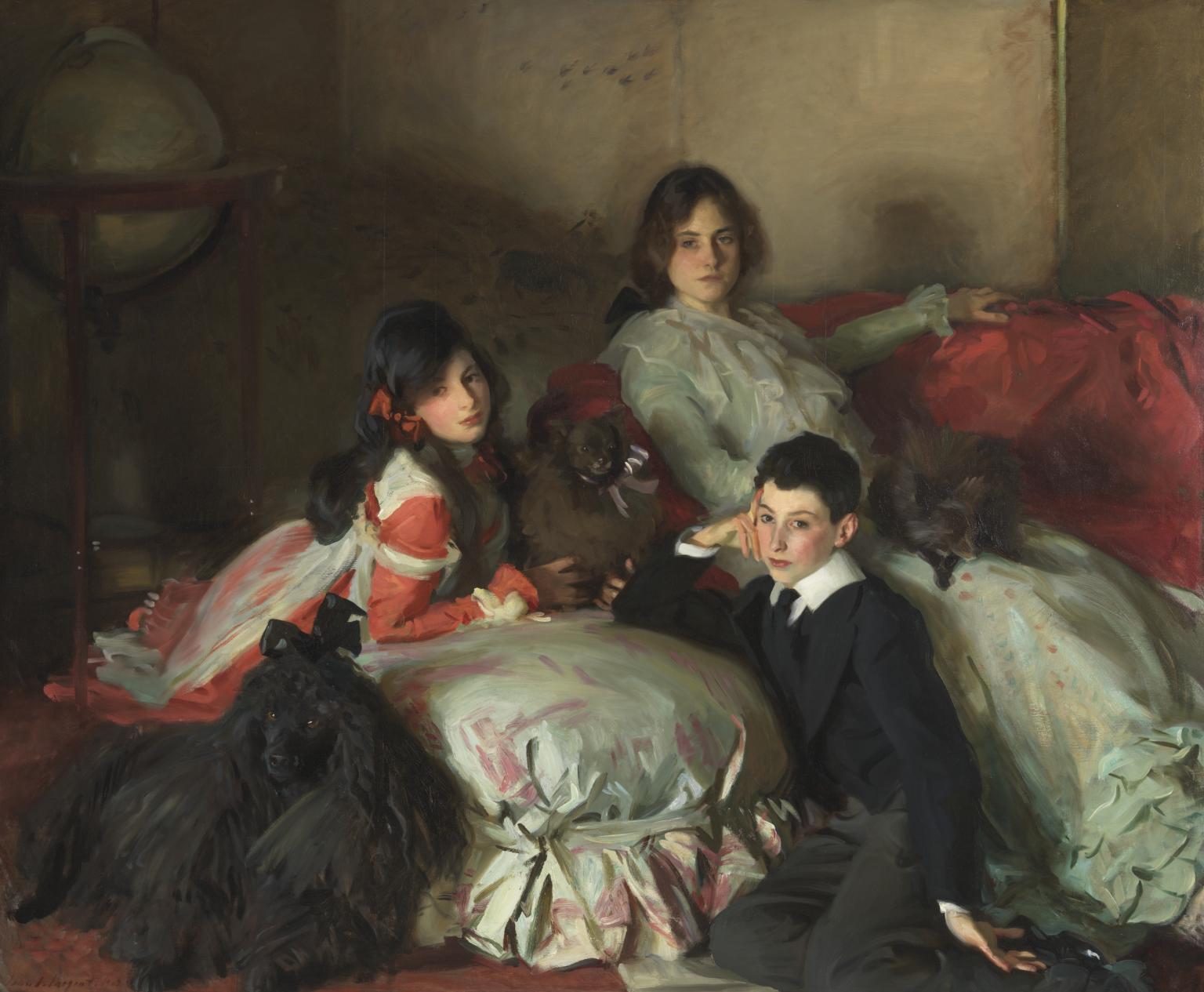 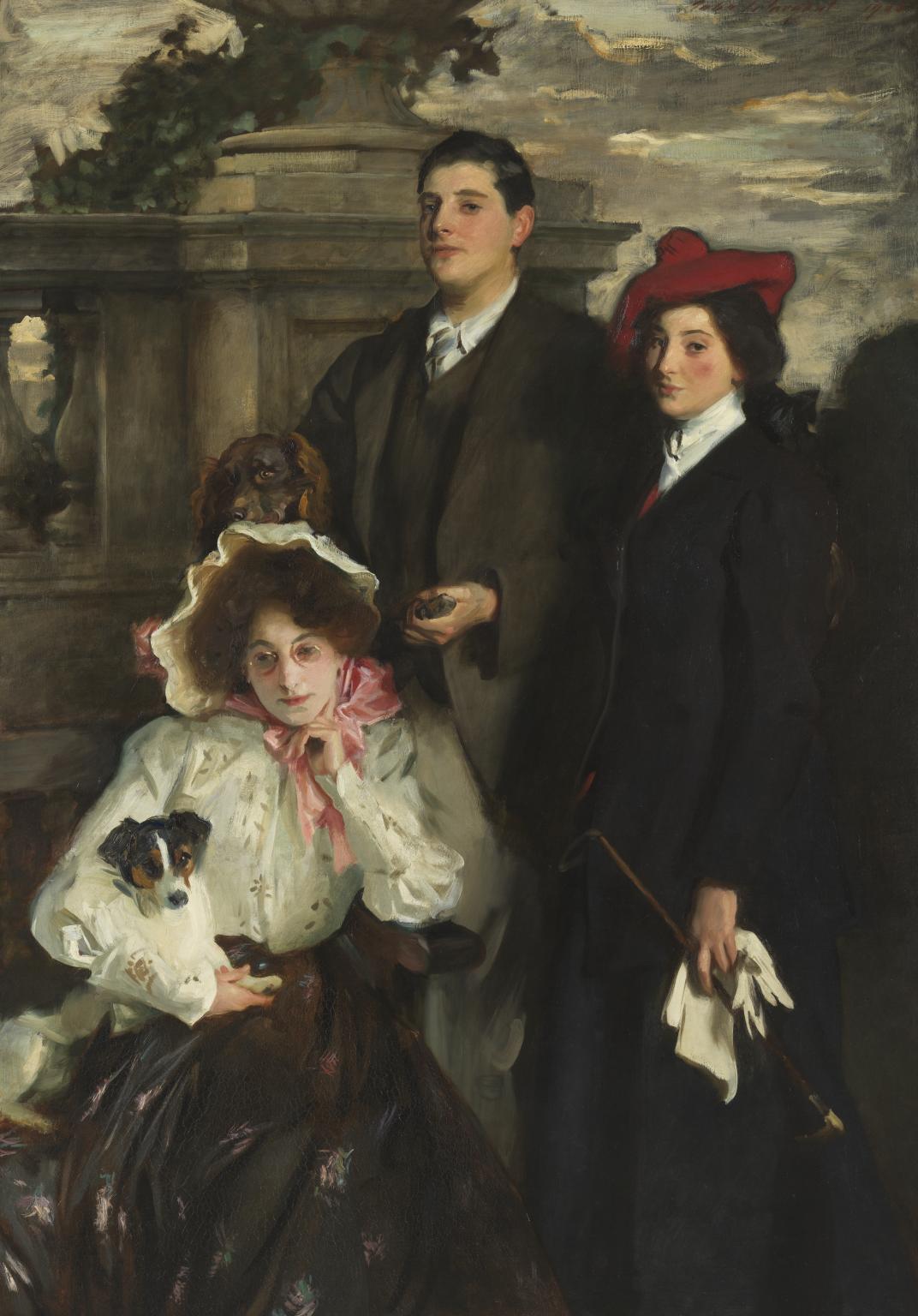 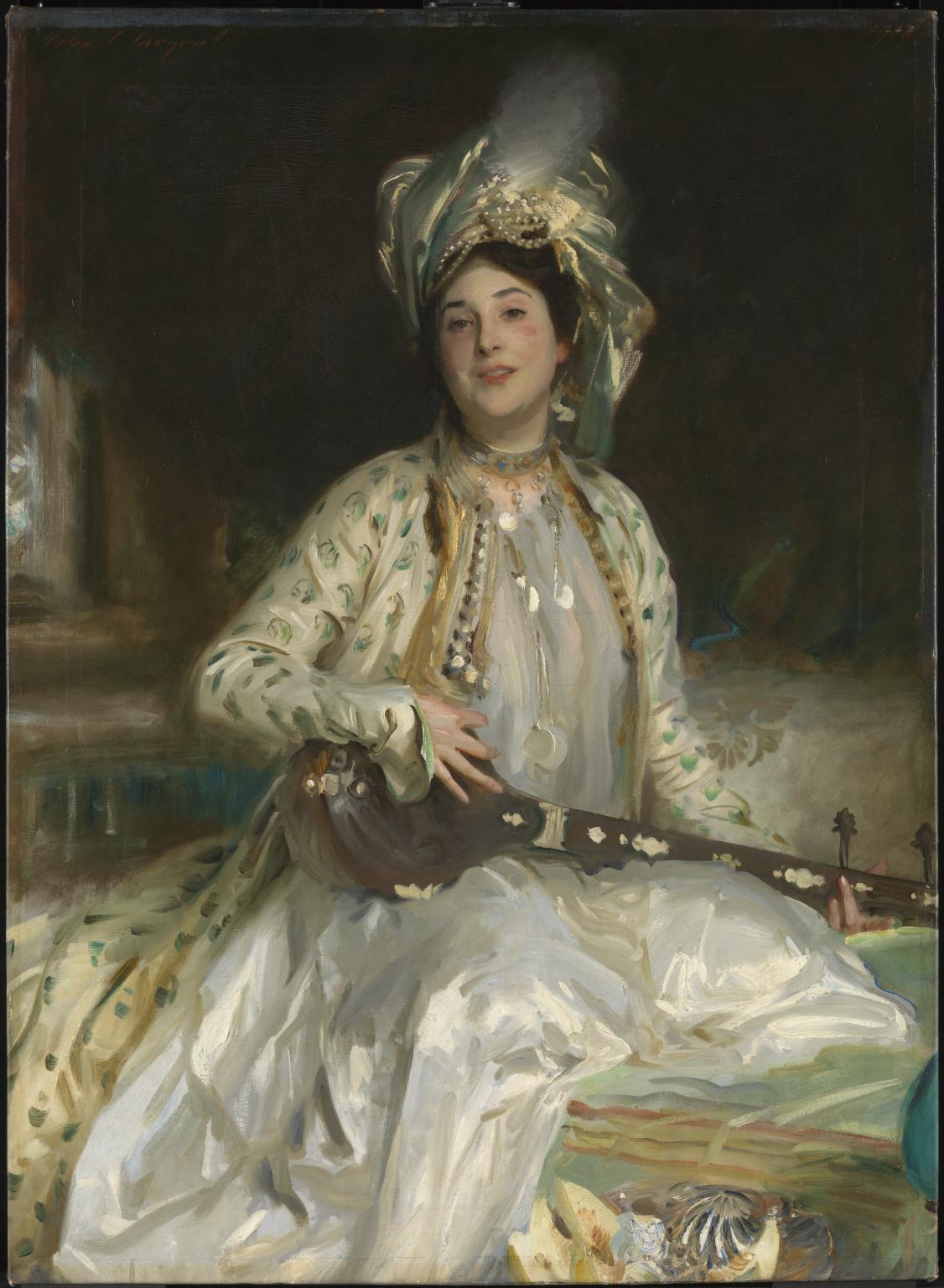 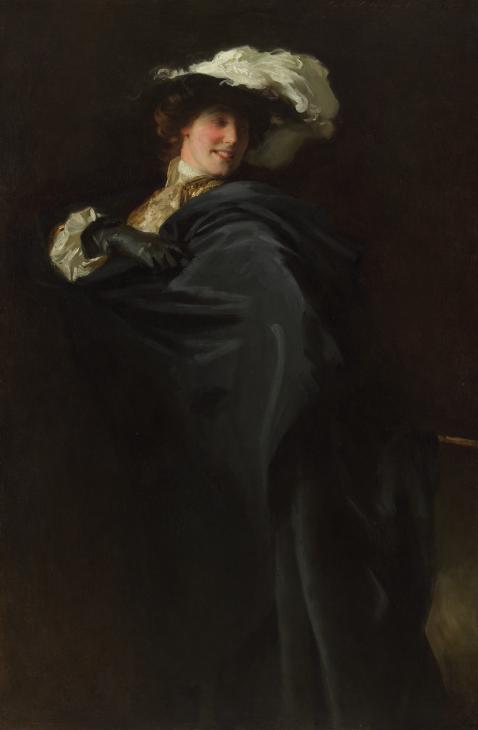