Room 9 in Artist and Society

Holzer’s work addresses the information overload and opposing perspectives we are confronted with daily. She asks herself: ‘How do you cope – within and without – when all these views are present, sometimes clamouring, sometimes fighting, sometimes murderous?’ Eye-catching and attention-grabbing, Holzer’s art invites us to read and interpret her messages for ourselves.

Early in her career, Holzer delivered her messages on posters and T-shirts so they would be seen in everyday contexts rather than in museums and galleries. LED signage, used for advertising and financial markets displays, offered another vehicle for her text-based projects. The scrolling electronic text echoes the way people encounter fragments of text in city streets.

BLUE PURPLE TILT shares the room with Joseph Beuys’s installation Lightning with Stag in its Glare. A large bronze sculpture, cast from a mount of earth, is suspended from a metal beam above our heads. It represents a lightning bolt striking the ground. Smaller sculptures symbolise animals surrounding it. The stag of the title is an ironing board balanced on logs, cast in shiny aluminium. This is a stark, petrified environment. Beuys was a performance artist, educator and environmentalist. He was concerned about modern society inclining towards ecological disaster.

This work comprises five different sets of sculptures: ‘Stag’ (originally made in 1958), ‘Lightning’, ‘Boothia Felix’, ‘Goat’, and ‘Primordial Animals’. These were cast from objects included in Beuys’s 1982 installation Workshop. According to Beuys, the stag is one of the ‘guiding and protective signs’ that appears ‘in times of distress and danger’, bringing ‘the warm positive element of life’. The only part cast in aluminium, the ‘Stag’ shines as if illuminated by a lightning bolt. The large triangular form of ‘Lightning’ was cast from a large heap of clay. For Beuys, ‘clay is a substance of the earth, the substratum on which we stand and from which we will awaken the planet to life after the dreadful slayings.’

Holzer started creating text-based works in the late 1970s. These included hundreds of slogans and common sayings expressing many different points of view. BLUE PURPLE TILT repeats messages from her previous works. Other texts are ‘found’ phrases, borrowed from literary and political sources. Holzer said of her LED displays: ‘A great feature of the signs is their capacity to move, which I love because it’s so much like the spoken word: you can emphasise things; you can roll and pause which is the kinetic equivalent to inflection in the voice.’

Joseph Beuys Lightning with Stag in its Glare 1958–85 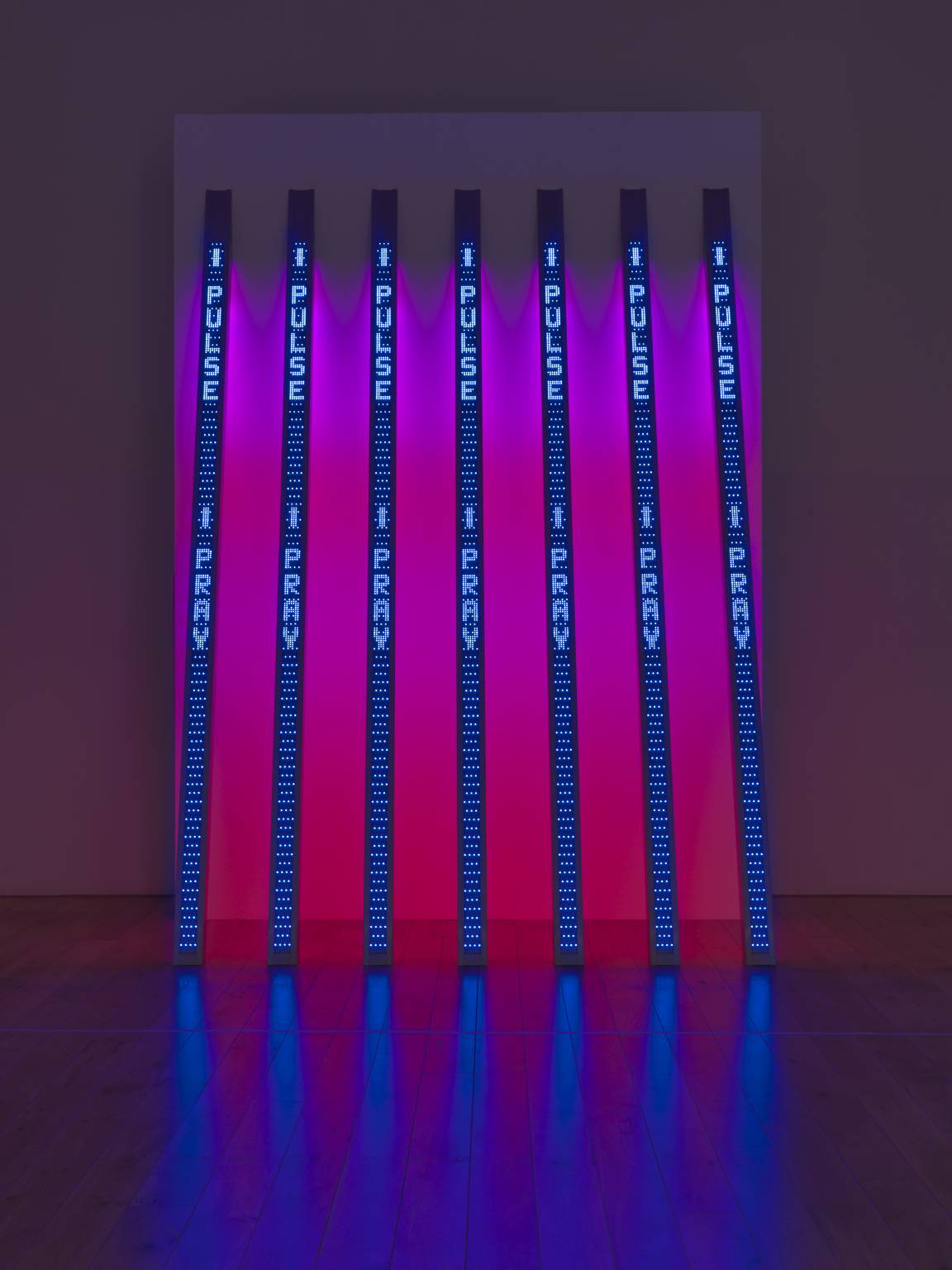