Room 3 in In the Studio

Using paper and wrought iron, Mohan Samant gave a threedimensional quality to his paintings. Carving shallow recesses in his canvases and attaching complex wire constructions, he experimented with sculptural relief processes. He would continue to develop this technique throughout his career. These playful, sculptural compositions reflect his original visual language.

Samant’s imagery draws from a range of sources across history and geography. ‘I was able to develop the linear relief and hieroglyphic aspects of Egyptian art and the rough texture of the Lascaux caves into a contemporary synthesis, while retaining the colours of Indian miniature paintings,’ he explained. He would then attach ‘wire drawings’ to his textured surfaces. Samant’s scenes may appear ambiguous. He described the characters in them as ‘archetypal figures dramatically acting upon a backdrop of timelessness created by the mythological.’

While he was at art school in Bombay (now Mumbai), Samant travelled to historic sites around India, getting to know the country’s art. After a successful career in India, he spent time in Rome on an Italian government scholarship in 1957–58. He also visited Egypt, which had a significant impact on his art. A Rockefeller fellowship brought him to New York where he remained from 1959–64 and it was during this time that he started exhibiting internationally.

In 1968 he moved permanently to New York. Samant was also an accomplished musician. He played the sarangi, an Indian string instrument, which he practised daily. He would apply the agility of musical improvisation to his art.

Mohan Samant, In the Beginning there was a Man, a Woman, and a Benevolent Ghost  1980

In the Beginning there was a Man, a Woman and a Benevolent Ghost 1970 is a mixed media work made on unprimed canvas. The three main figures of the title dominate the composition. To the left-hand side is a reclining woman holding a pair of set-squares whose triangular shapes are broken up into zig zags and repeated across the surface. To the right-hand side stands a man. Like the woman, the figure has multiple limbs and faces made of paper cut-outs and folded papers that overlay one another and coalesce. The ghost at the top of the canvas resembles a four-legged beast with a large pair of crescent-shaped horns, reminiscent of the cows that are typically seen throughout the artist’s native India. The ghost’s feet and hands resemble those of humans and the work’s title suggests that he is a friendly creature. In addition to these main figures, four patches of vibrant colour spread across the surface of the composition and stand out against the unprepared canvas; a bright blue circle at the top of the beast’s horns, a boot-shaped patch of purple-pink forming the ghost’s feet, a yellow triangle pointing towards the bottom of the picture and a large smudge of green near the centre. Between these, at the centre of the canvas, is a naturalistically drawn yet rather incongruous head of a duck, while a variety of animals, especially elephants, appear on the edges of the canvas in delicate stencilled patterns.

Midnight Fishing Party 1978 is a large mixed media work, consisting of several assemblages of figures made of paper cut-outs and folded paper spread across a large canvas. Some bodies appear superimposed and interlocked, nestled together in dense groups of plentiful shapes, while other individual ones, shown on a slightly larger scale, stand out against the deep blue background. To the left-hand side of the canvas appears a tall, standing, puppet-like figure, seen in profile and casually holding a fishing rod. Another fisherman and woman, morphing into one another, are lying in lascivious poses at the bottom of the canvas. Two additional figures, at the top left of the canvas and on the right-hand side, also hold fishing rods.

Mohan Samant In the Beginning there was a Man, a Woman, and a Benevolent Ghost 1980 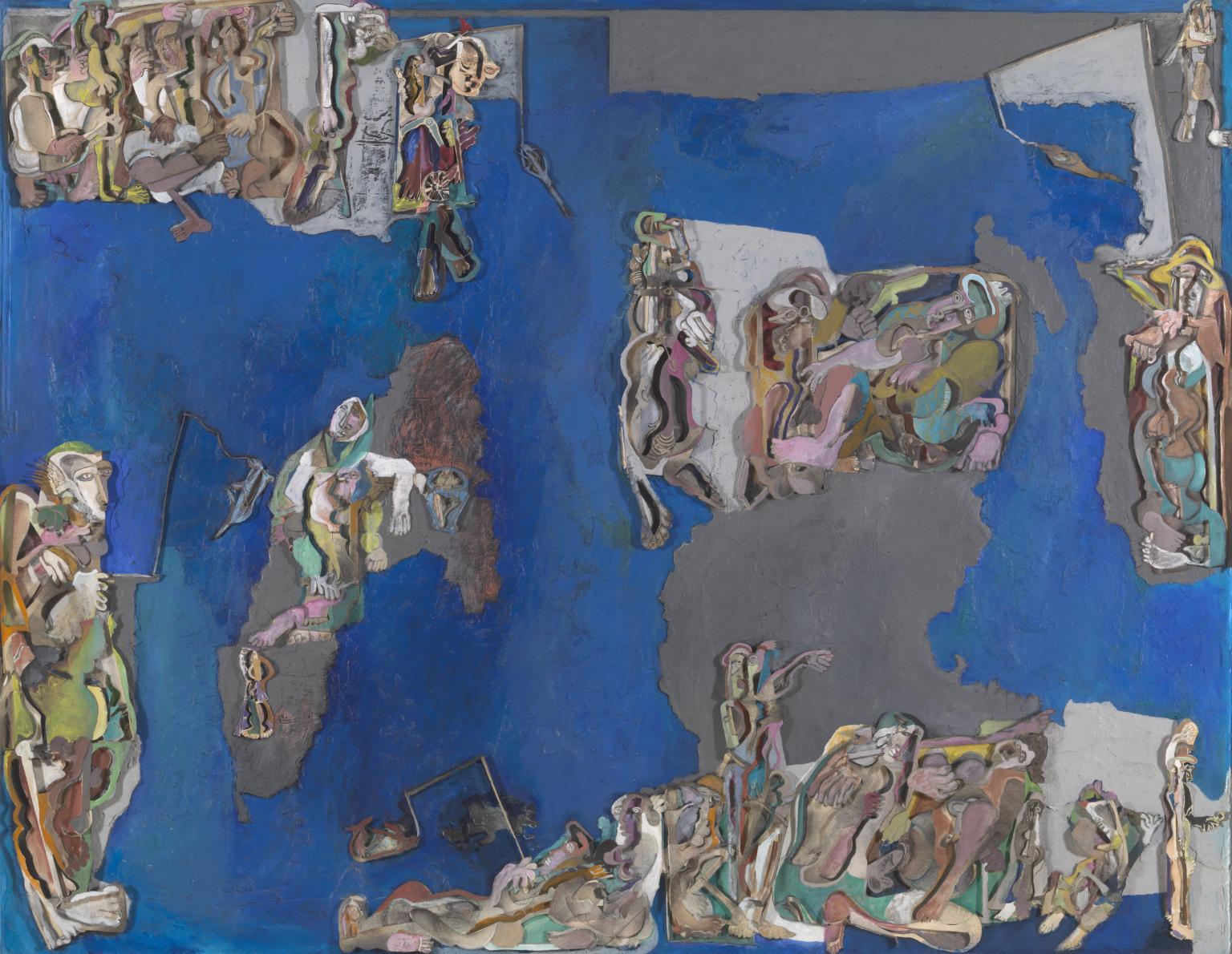