Room 6 in In the Studio

Artists have made paintings that use only the colour white since the early twentieth century. Single colour paintings, known as monochromes, are an important way for artists to make abstract works. Using only white might seem, at first, to take this approach to extremes. Without image, and apparently pure, the white monochrome appears to resist meaning and interpretation. For some people, it has come to symbolise everything that is believed to be elitist and difficult about modern and contemporary art.

While the paintings and reliefs in this room all use white, or a range of near-white hues, they demonstrate the many ways in which such an apparently reduced range of possibilities can be employed.

Far from limiting artists, the decision to restrict themselves to one colour can open up a rich and versatile area of investigation. It draws attention to a variety of techniques, materials, textures, surfaces, structures and forms, and emphasises the responsiveness of white to light and shadow.

The artists in this room also explore the philosophical, poetic, spiritual or religious associations of white, which in some cultures can suggest contemplation, emptiness, the void or infinite space. Considered in this way, rather than lacking meaning, white becomes loaded with significance.

Whitten wanted to create new type of abstract art. Many abstract artists focused on mark making. Whitten explored the use of a single action to fill the canvas. To do this, he removed colour from his work: ‘Red, yellow, blue etc. with their heavy historical and psychological references had become unwanted baggage. I trusted only black and white.’ To avoid relying on paint brush marks, Whitten created new techniques and tools. The horizontal lines in this work were made with a large, specially designed Afro comb, pulled once across the canvas.

1/8
artworks in Painting with White

Manzoni aimed to strip any type of storytelling from painting. For him, this meant removing colour from his works. In 1957, he began to produce painting-like objects he called 'Achromes.' He made them by soaking his canvases in kaolin, a soft clay used to make porcelain. The kaolin removed any colour, creating ‘nothingness’. The weight of the material caused it to sag, creating folds across the surface of the canvas. He described them as 'a white surface which is neither a polar landscape, nor an evocative or beautiful subject, nor even a sensation, a symbol or anything else: but a white surface which is nothing other than a colourless surface, or even a surface which quite simply ‘is’.’

2/8
artworks in Painting with White

Martin said that abstract painting had led to a desire to use three-dimensional materials. This work follows a strict mathematical rule, the Golden Section. It dictates the size of different elements, with the aim of creating the perfect composition. Writing about this work, Martin explained, 'I took a simple element (in this case a parallelepiped – a solid figure whose faces are six parallelograms) and subjected it to a system of changes, not knowing what would happen to it…. I think all my work has been based on this kind of curiosity.'

3/8
artworks in Painting with White

Schoonhoven experimented with several different styles of art. In 1960, he began making white reliefs using geometric shapes. This work is built out of cardboard on a wooden base with paper glued over it. 'R69-26' is an identification number, rather than a title. R indicates that it is a relief, 69 refers to the year it was made. 26 signifies that it was his twenty-sixth relief made in 1969. Schoonhoven had a job in the Dutch civil service, making art at the evening and weekend.

4/8
artworks in Painting with White

Li Yuan-Chia arrived in London in the early 1960s. Considered one of the founding fathers of abstract art in Taiwan, his work combined aspects of Western and Eastern thought. He used the bare language and spatial freedom of abstraction to convey existential conditions, focusing on the situation of the individual in the universe. The surface of Monochrome White Painting includes Li Yuan-Chia’s most personal visual mark: the dot or circular form, which for him symbolised the beginning and end of all things.

5/8
artworks in Painting with White

Ryman made this painting using pigmented shellac laid over plastic and glass. It is one of about nine paintings from the same period. The strips of aluminium, which are part of the work, allow it to be attached it to the wall. Ryman pays great attention to the paintbrush marks. He uses white because he considers it less ‘emotionally charged’ than other colours. His works are about surface, texture, grain and light rather than composition.

6/8
artworks in Painting with White

Bogart focuses on the physical qualities of paint in his work. Here, he has applied a thick layer of paint to the surface and pulled it to the edges. He became interested in the borders of his paintings. Bogart commented that, ‘I started to see how important the borders of a painting were … extending the material over the borders of the painting. It gave me a certain looseness or broad outline.’ He made this work after moving to a bigger studio. Keeping one of the largest rooms empty, he described how ‘the influence of this emptiness was soon noticeable in my work’

7/8
artworks in Painting with White

It might look like the artist has randomly slashed this canvas. In fact, Buthe carefully composed it. He wanted to create a powerful relationship between the grid of the stretcher and the loose fabric. He used various processes to create this effect. This includes stitching lengths of cloth together and folding, tying, and wrapping sections around and underneath the stretcher bars. This draws attention to the space in front, inside and behind the stretcher. Buthe also painted the wooden stretcher bars white to match the fabric. This helps them be seen as parts of the same idea.

8/8
artworks in Painting with White 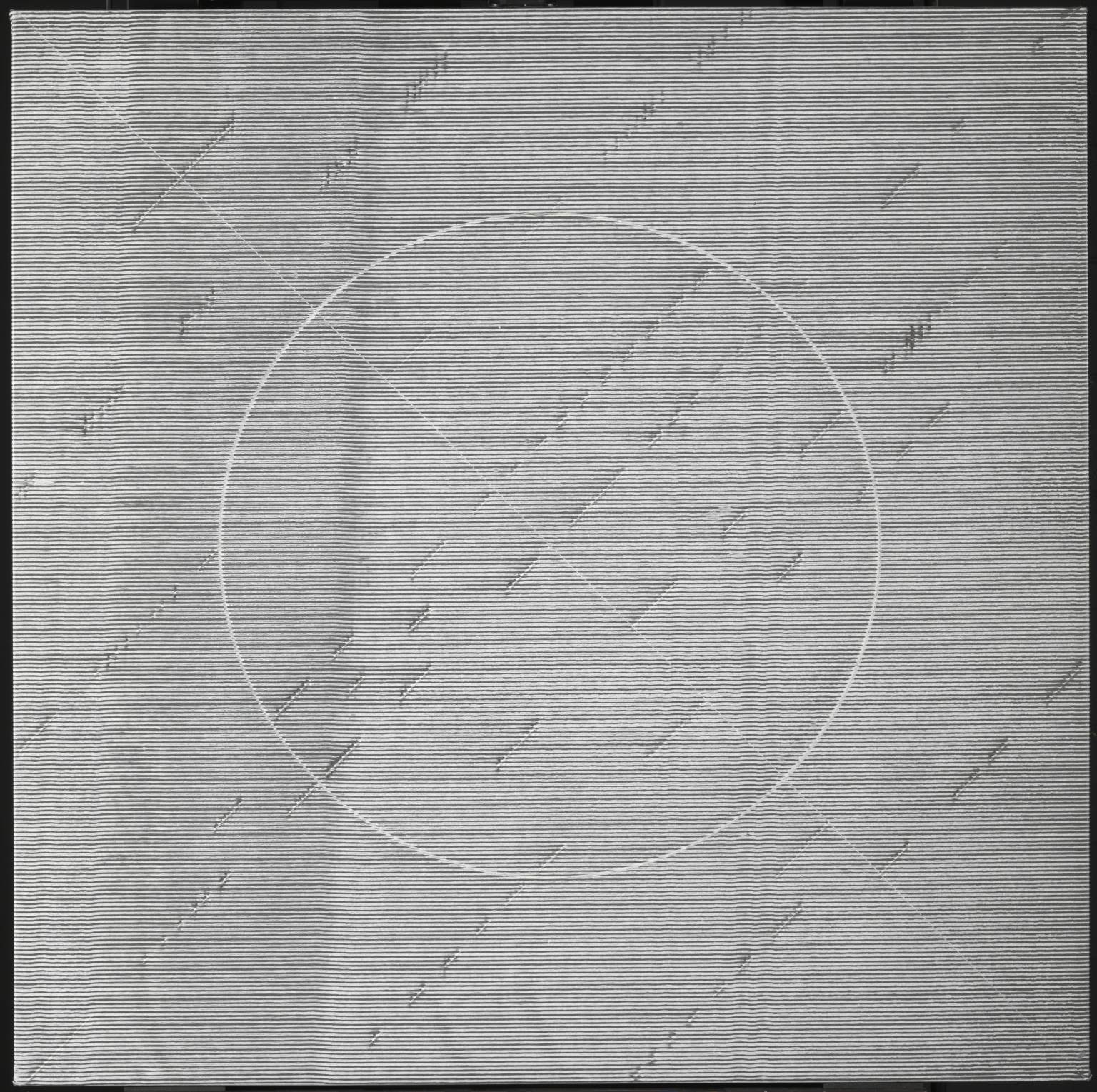 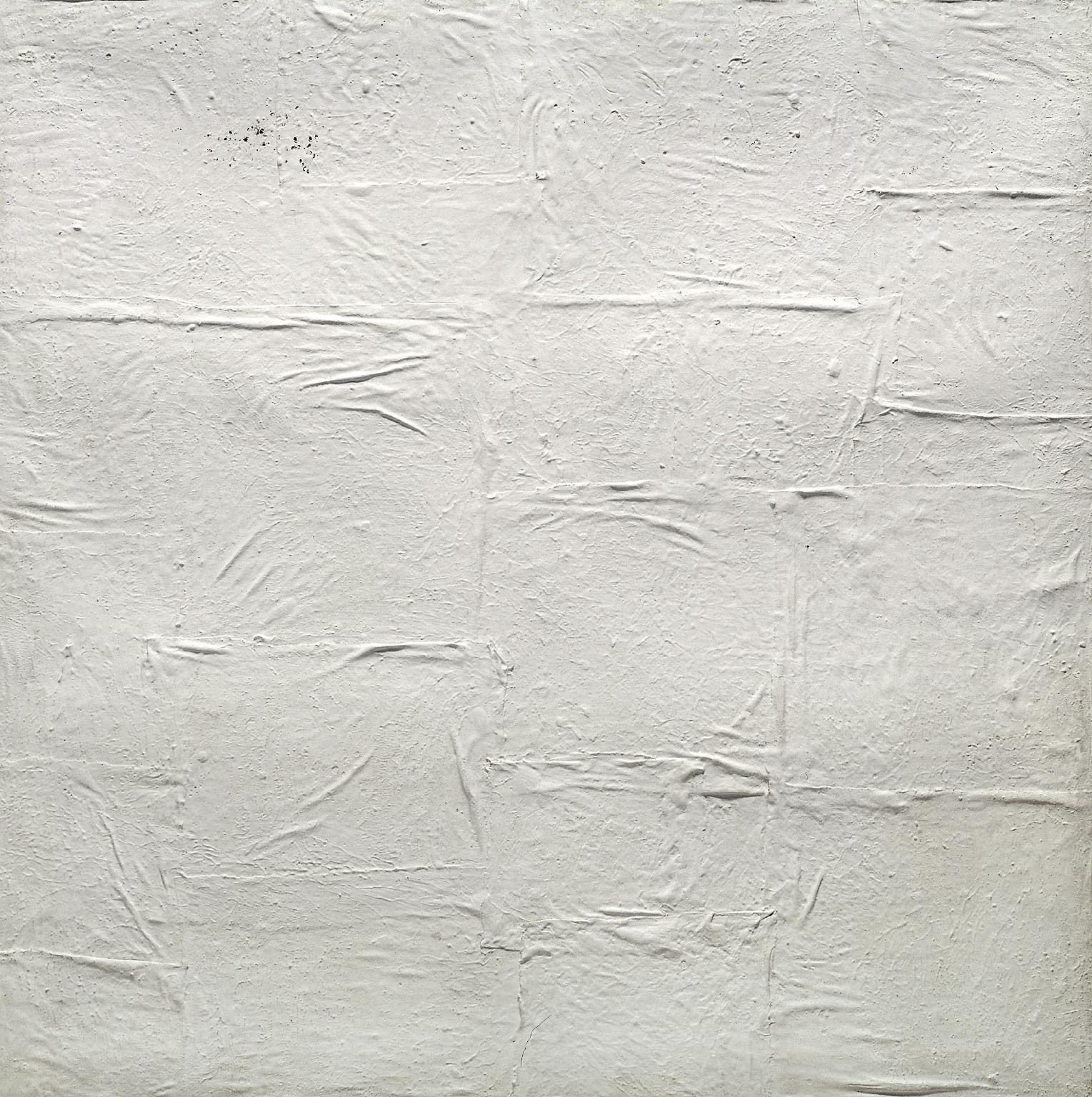 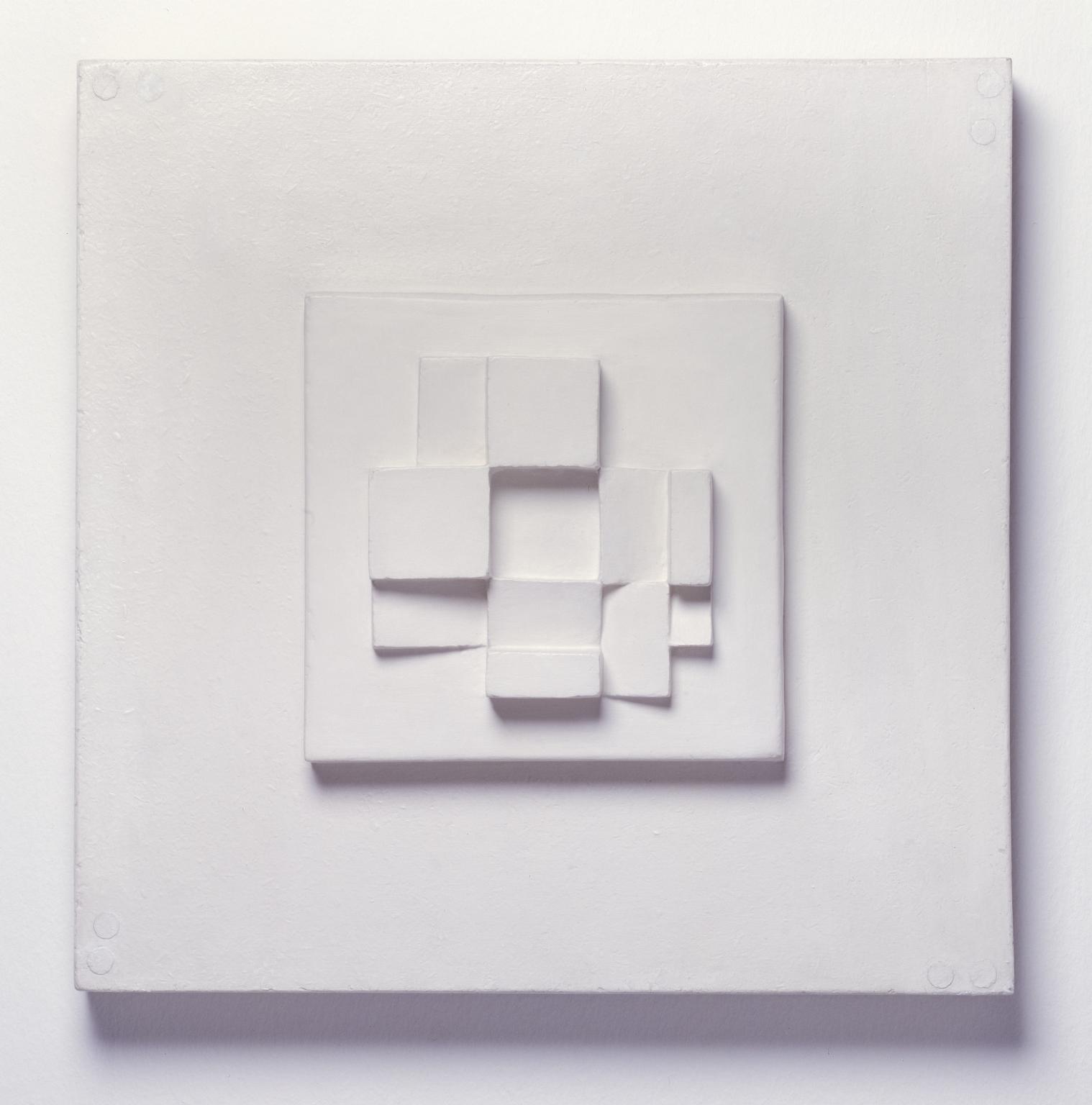 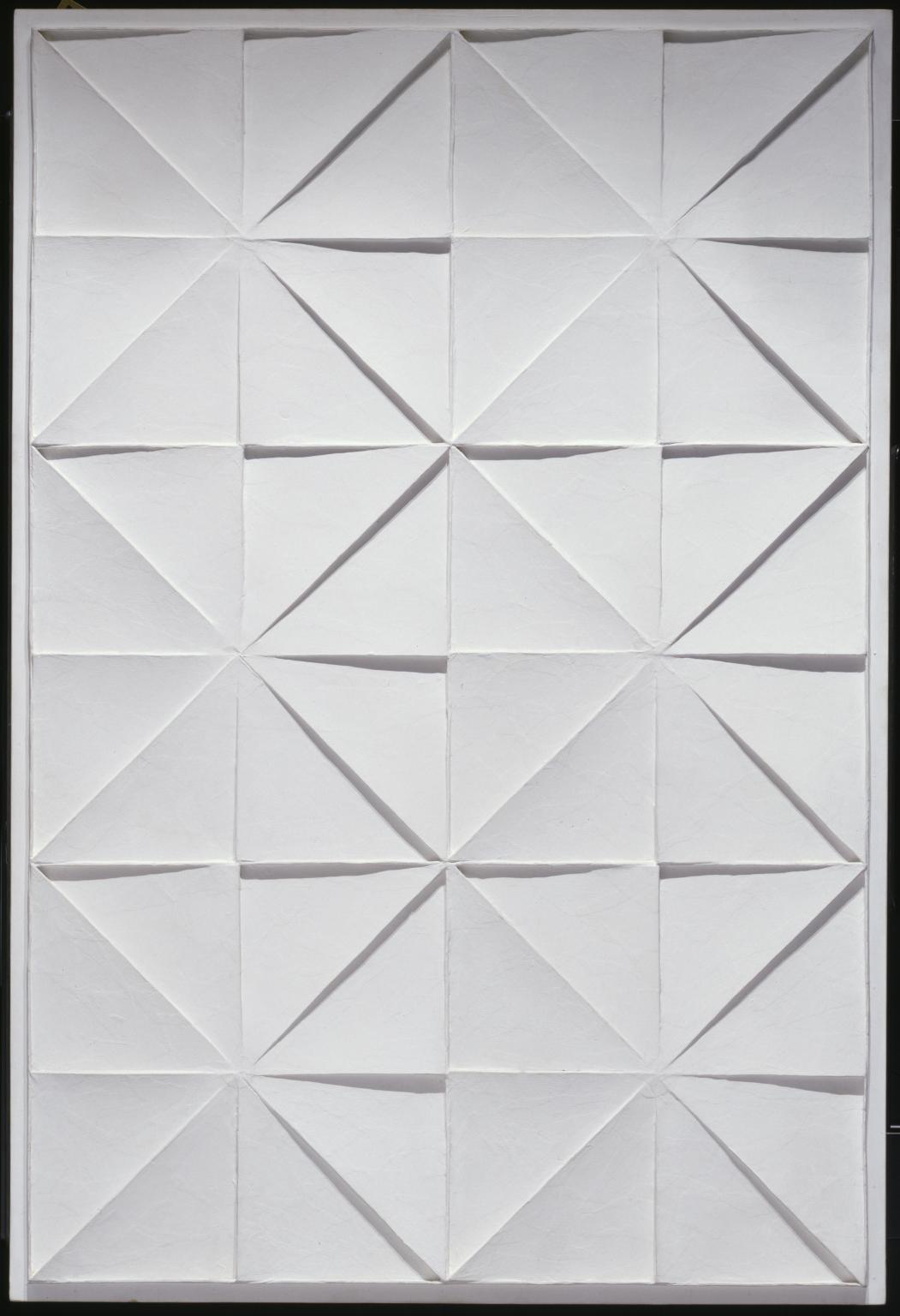 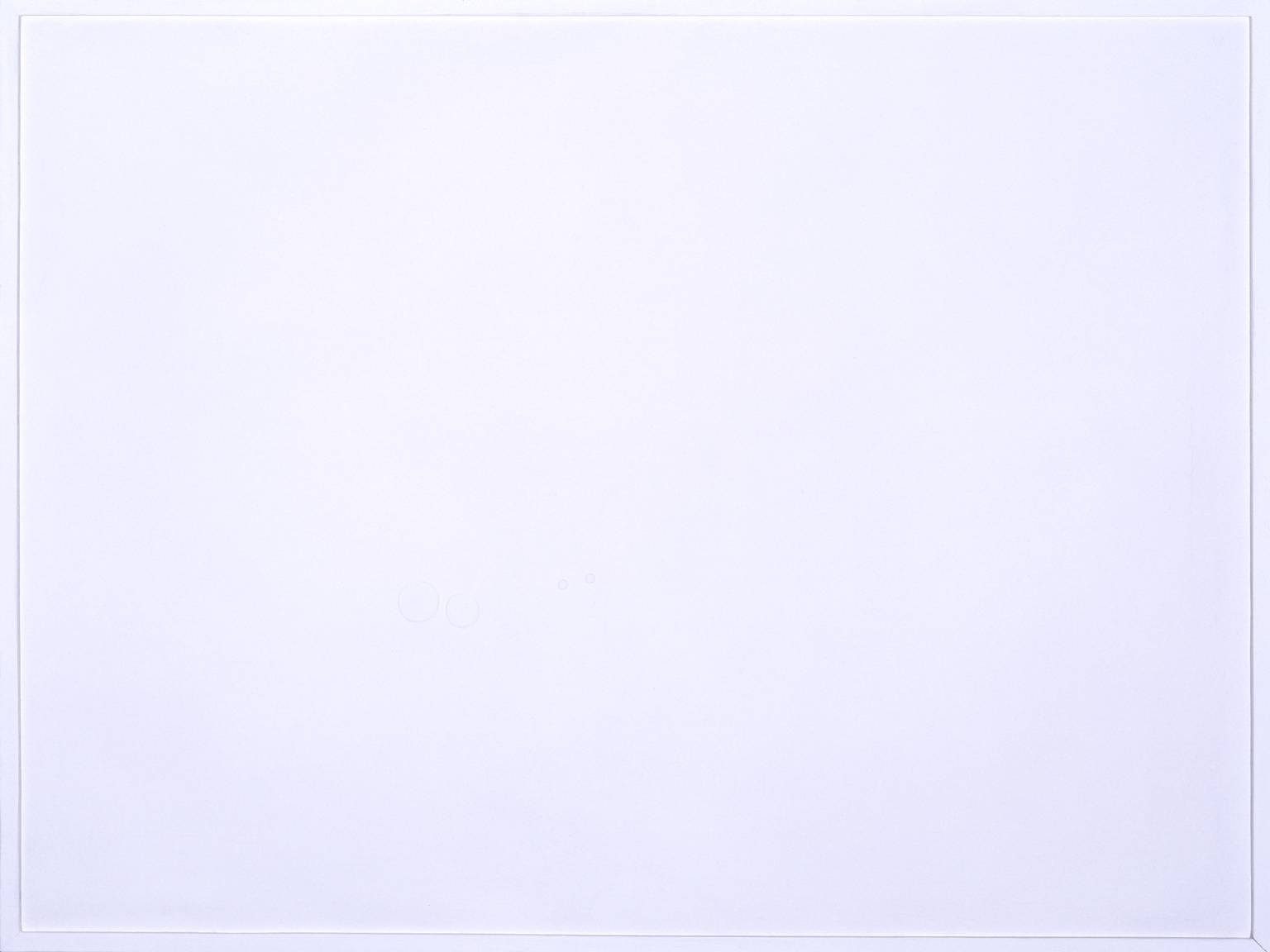 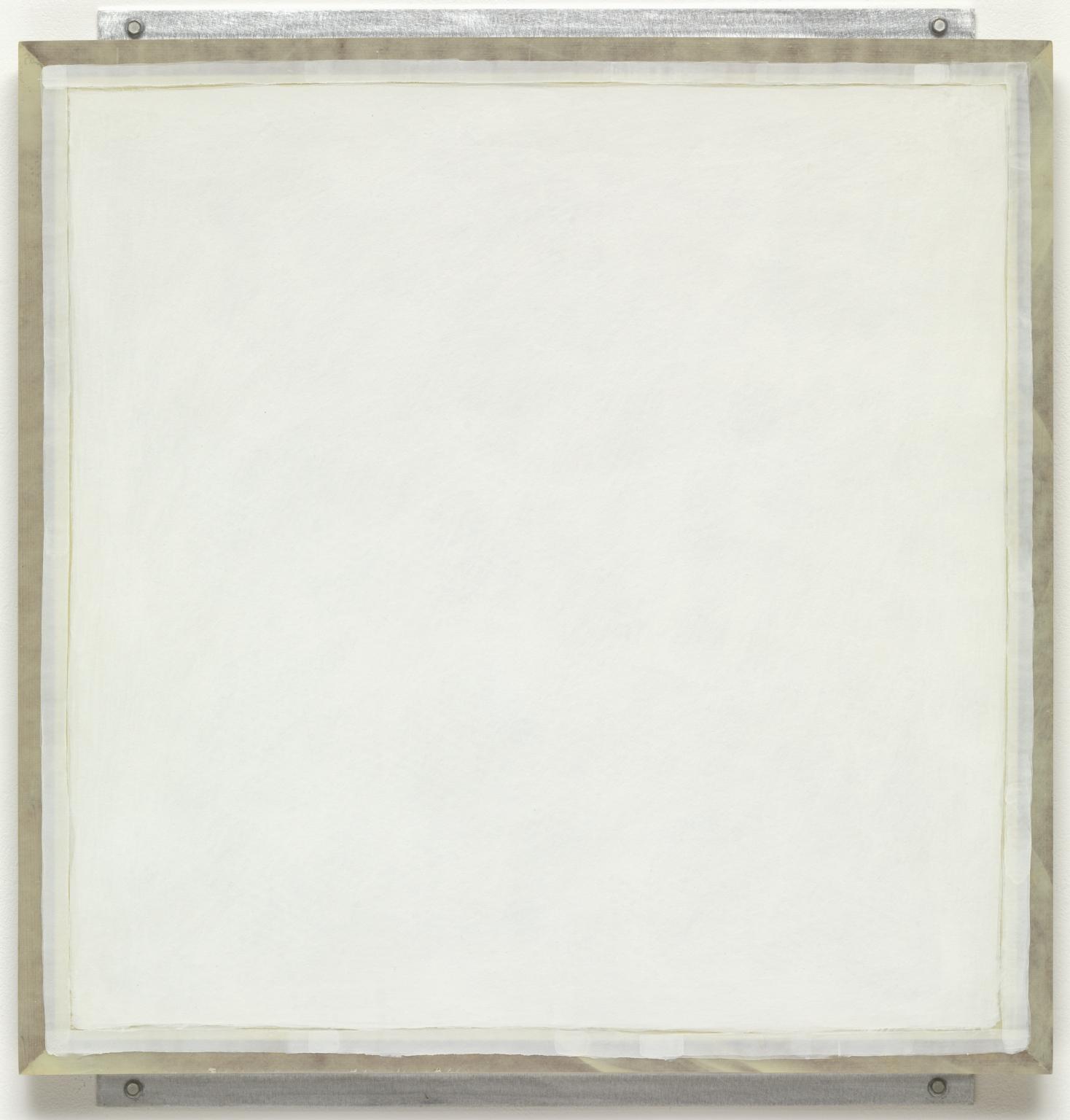 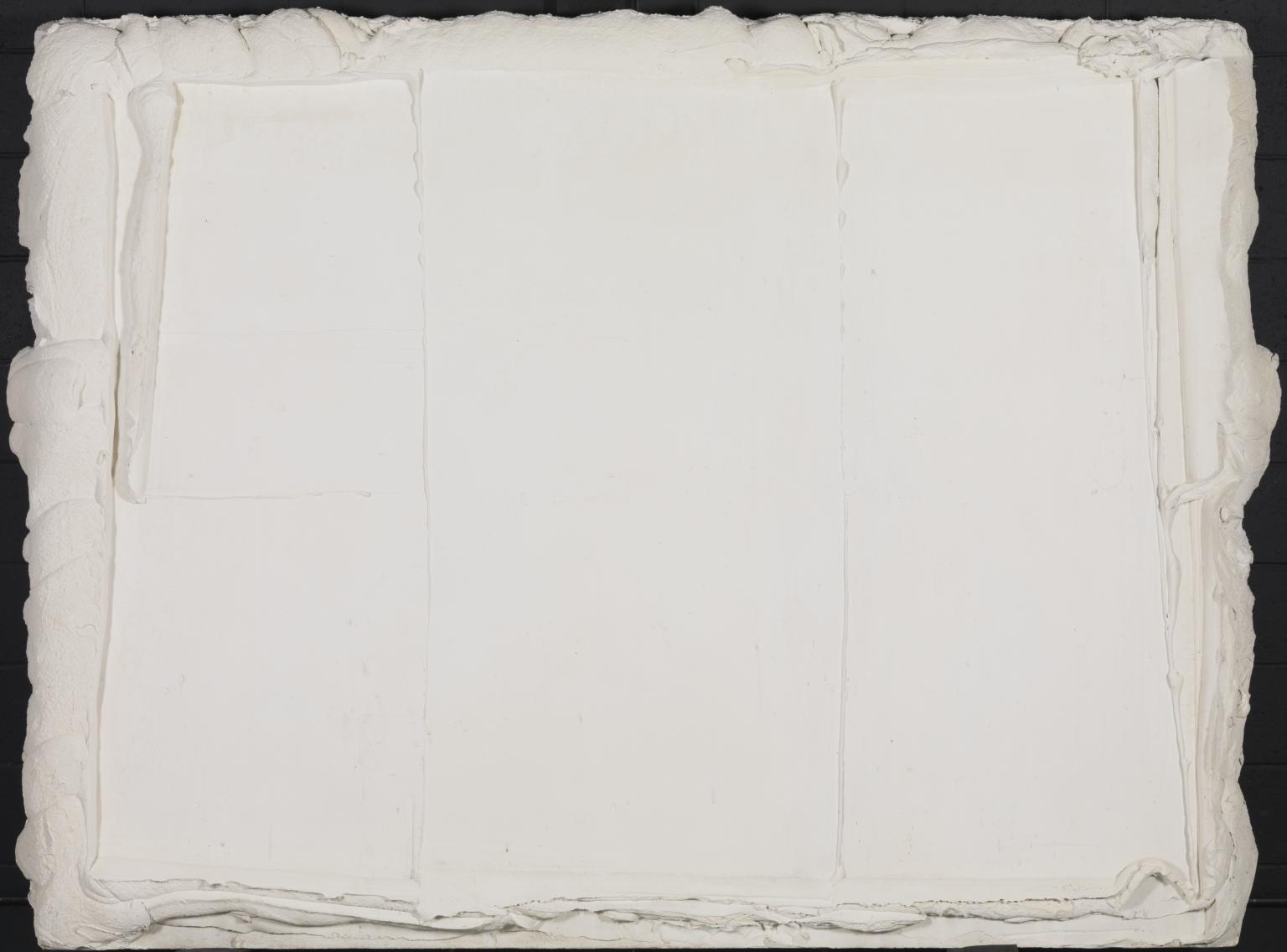 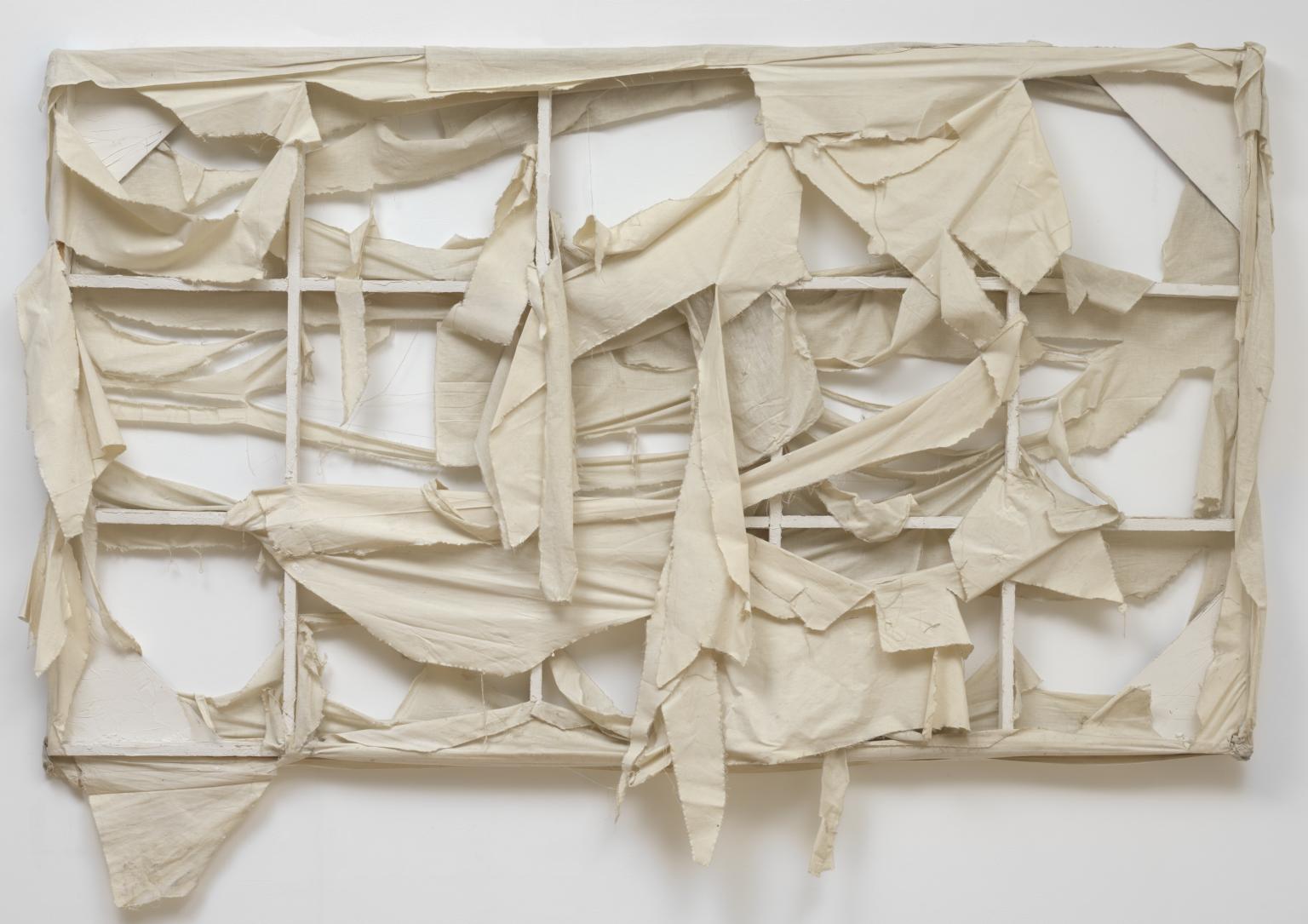