The Tanks provide a permanent gallery for live art, performances and a film and video work from the Tate collection. There is also a programme of new commissions of works made for the specific spaces.

3 rooms in The Tanks 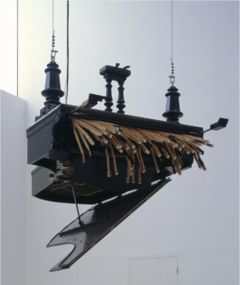 1/3
Highlights in The Tanks

This upside-down grand piano occasionally comes to life in a noisy outburst. The instrument was used as a prop in Horn’s feature film Buster’s Bedroom 1990, set in a psychiatric clinic. Horn has described how, ‘having freed itself from the psychiatric clinic, [the piano] is now composing its own music’. The piano acts like a living thing: it gets upset and slowly regains its composure. This might mirror our own experience of being startled by the sculpture.
Horn’s machines often appear to act like living creatures. She has compared their behaviours to those of human beings: ‘They react as we react. My machines are not washing machines or cars. They have a human quality and they must change. They get nervous and must stop sometimes. If a machine stops, it doesn’t mean it’s broken. It’s just tired. The tragic or melancholic aspect of machines is very important to me. I don’t want them to run forever. It’s part of their life that they stop and faint.’