Modern Art and St Ives is the first of a series of displays drawn from the Tate collection, exploring the histories and ideas of modern artists working
in and around the town during the last century. It is intended as an introduction to the local, national and international significance of a historic artist community, which is still thriving today.

This first gallery highlights some of the modern artists who are commonly associated with St Ives. It leads into galleries 2–4 which consider the
artistic exchanges between Europe, London and St Ives that were shaping modern British art just before and after the Second World War. Within this
tumultuous period, the migration of artists and ideas contributed to St Ives emerging as a centre for post-war modern British art.

The display continues in galleries 7–8 which show the wider international contexts surrounding modern art from the viewpoint of post-war St Ives. Gallery 7 highlights how sculptors working with abstract forms shared concerns with their counterparts in Britain and abroad. Gallery 8 considers how painters broke new ground from the 1960s onwards, departing from gestural abstraction in favour of creating new and more diverse perspectives on art and society.

Entry to both the display and the gallery is free for Tate Members, Locals' Pass holders and under 18s. 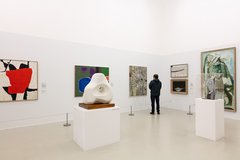 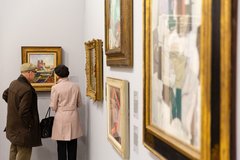 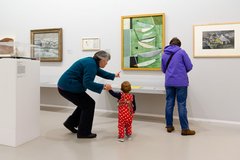 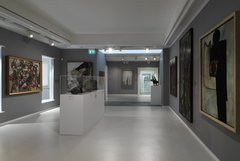 Construction in painting and sculpture after 1950

Construction in painting and sculpture after 1950 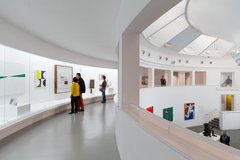 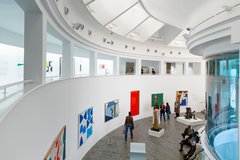 See works from Tate's Collection in the rotunda 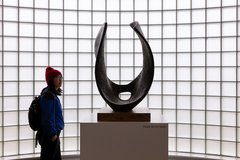 Poem comprises five carved wood blocks placed on top of one another to create a vertical sculpture. Its configuration relates to that of Infinite Structure of the same date (Tate T13262), but this piece is significantly smaller, as well as being carved in a different material. Rather than being strictly geometrical, as is the case with Infinite Structure, the wooden forms have softer, more organic lines and in places interlock instead of sitting squarely on top of each other. Each block is completely pierced by at least one or two large, carved holes in its sides and ends. This work is one of a number of small scale sculptural ‘poems’ made by the artist during this time. Each individual unit is able to function as a unique sculptural form and the individual units can be rearranged in different formations. This potential for interaction and movement within the work relates it to the sculpture of artists such as Lygia Clark (1920–1988), whose ‘Bichos’ were similarly kinetic, though Choucair’s work is less about an organic mutability than about the inherent structure among its parts, and its relationship to Islamic poetry. The softer lines and abstract shapes of Poem, and the visible grain of the wood, also call for a comparison with the work of British sculptor Barbara Hepworth (1903–1975), though once again the highly specific poetical reference in Choucair’s work sets it apart from this Western lineage.

In 1934 Barbara Hepworth's abstraction
based on the human figure gave way to an art of pure form. With such works as Three Forms she reduced her sculpture
to the most simple shapes and eradicated almost all colour. She said later that she was 'absorbed in the relationships in space, in size and texture and weight,
as well as the tensions between forms'. While the three elements are slightly imperfect in shape, their sizes and the spaces between them are precisely proportional to each other. This reflects her concern with the craft of hand-carving and with harmonious arrangement
of form.

This table-top scene, with its fruit-bowl, violin, bottle and (painted) newspaper, is constructed from areas of colour that resemble cut-out pieces of paper. The background has been left white. Picasso and Braque had been making collages that experimented with representation and reality since 1912. They soon began to simulate the appearance of collage materials in their oil paintings, sometimes adding sand to the paint to give a heightened reality to the picture surface.

Pauline Boty, The Only Blonde in the World  1963

Pop artists were fascinated by Marilyn Monroe as the most famous of movie stars and the epitome of a new sexuality. Most responses to her were made by men, however. Boty was one of the few women artists working in this vein and perhaps that gave her a different view on Marilyn.Is the figure isolated by being squeezed between fields of abstract forms? Is the title ironic? Boty’s work was sometimes concerned with gender and sexuality and so it is ironic, that she was herself frequently discussed in terms of her appearance.

© The estate of Pauline Boty