Greer and Robert on the Bed, NYC 1982 (Tate P78044) is a photographic print from an edition of twenty-five. It is also a component image in the photographer Nan Goldin’s slideshow and book The Ballad of Sexual Dependency 1986. In the introduction to the book Goldin writes, ‘These pictures may be an invitation to my world, but they were taken so that I could see the people in them.’1 By suggesting that the photographs she produced offered an ‘invitation to [her] world’, Goldin highlights the ways in which her images offer the viewer glimpses of a different social world. These photographs act like windows onto another, parallel reality, showcasing the thrills and agonies of sex, drugs and love in late-twentieth-century New York, as Goldin and her elective extended family lived them. But what does it mean that she made these images – and, as we will see, remade them again and again – in order that she herself ‘could see the people in them’? Goldin’s drive to archive experience as it unfolded has been understood in relation to photography’s capacity to aid memory, to fix time’s speeding flight and to create a record of the way things really happened. This case study, however, considers how these images not only represented the communities they depict, but also contributed to creating them.

Greer and Robert on the Bed, NYC is one of seven photographs by Goldin acquired by Tate in 1997. Each one of these entered the collection as an individual cibachrome print, although each also figures as part of a larger project. For example, this work and Nan one month after being battered 1984 both appear in The Ballad of Sexual Dependency, while Misty and Jimmy Paulette in a Taxi, NYC 1991 is an element in the work, The Other Side. Both The Ballad of Sexual Dependency and The Other Side, moreover, themselves lead multiple lives – as books published in 1986 and 1993, respectively, and as slideshows that can be, but are not always, differently arranged each time they are shown.

The first iteration of The Ballad of Sexual Dependency was a constantly mutating, projection-based installation – or maybe more accurately, a multimedia party trick. In a 1996 interview with film critic and historian J. Hoberman, Goldin recalled that the first slideshow she ever did for a public audience happened in the late 1970s at a birthday party for musician Frank Zappa held at New York City’s Mudd Club, a downtown (TriBeCa) haven for the then-gritty city’s disaffected and super-hip, self-styled degenerati.2 Unlike later iterations, that version of the slideshow had no accompanying soundtrack and no pre-determined sequence of images. It therefore hewed closely to the formal lessons of Goldin’s training at the School of the Museum of Fine Arts, Boston. Goldin has described how her slide-based approach developed in art school, out of an aversion to printing in the darkroom – a place she experienced as a locus of technophilic machismo. She made slides in order to have something to show her instructors.3 While this process started as a convenience, it turned into a habit and finally became a medium.

The medium, however, was not complete until the addition of music, which Goldin says happened ‘organically’ over the course of the early 1980s.4 As she presented her slides in bars and clubs, there would sometimes be a band performing and she started to notice the way the images and sounds would play off one another. Before long Goldin devised an ‘exacting’ sequence of images paired with snippets from songs ranging in genre from opera to rock.5 A precisely devised montage of sound and image grew, by 1991, to include approximately 750 slides and forty songs experienced over roughly forty-five minutes.6 This meant that each image would only be visible for a few seconds and consequently that the slides were no longer seen as individual works. Instead the grouping of images created a larger, multi-faceted but amalgamated impression of a social totality. As Hoberman put it in an early review of the work:

Hoberman was keen to note that this typological arrangement did not in any way reflect a callous, or even cool, distance on the part of the photographer. He continued, ‘Given the work’s matter-of-fact sensationalism, the comparison to Diane Arbus is inevitable. Goldin, however, seems more connected to her subjects; as the same people appear over and over again, the show has a narrative subtext that transcends the voyeuristic.’8 The implication is that Goldin’s personal connection to her subjects somehow resides in the form of the slideshow.

It is crucial that, for Goldin, ‘the audience was the people who were in the slides’.9 The fact that she was making images of this community as a member of it – rather than as an observer – has come to mean that her images constitute direct transmissions from her world to ours. To think of The Ballad of Sexual Dependency this way is to understand Goldin’s insistence that it is an ‘invitation to [her] world’, offered through documentary images fashioned not only by, but also for, its native population. Indeed, this aspect of her work has driven most critical writing about Goldin for the last thirty years.10 This reading is corroborated by Goldin’s statements about her work as well as her understanding of how photography serves memory more broadly. In the introduction to the book version of The Ballad of Sexual Dependency, Goldin makes a direct connection between her incessant visual record-keeping and her inability to remember her older sister, who committed suicide when Goldin was just eleven years old. This powerful personal story invokes the melancholic discourse of photography, particularly the desire to fix that which is fleeting. This aspect of Goldin’s work – along with its offhand, spontaneous snapshot aesthetic – has conspired to place her in the tradition of documentary photography. One result is that the artist has continually struggled to voice what she thinks are the more universal aspects of her project. Another is that her works can be collected as single photographic prints.

The beginning of this essay, however, remarked on Goldin’s sense that her ‘pictures were taken so that [she] could see the people in them’. There is an obvious way in which such a declaration conforms to the truth-witnessing, documentary mode. At the same time, the need to see images of reality in order to verify its existence points to the instability that haunts all documentary practices – a photograph is not an immediate transcription of reality but rather a medium for its representation and dissemination.11 While Goldin has positioned her work as a window onto reality, she has also conceived of it as a mirror: both her 1996 Whitney Museum retrospective and a BBC film she co-directed that same year take their names from the Nico ballad I’ll Be Your Mirror.

To think of The Ballad of Sexual Dependency as a mirror is to acknowledge how it enacted and reflected processes of self-fashioning, in other words how it participated in the creation of the reality it sought to document. This mirroring can be seen at every level of The Ballad’s production. Recall that for Hoberman, the work escaped voyeurism by virtue of producing narrative. He added that, ‘if everything seems spontaneous rather than posed, these portraits are not simply candid – they’re also complicitous. They’re self-parodies with conviction.’12 Goldin’s subjects – her friends, herself – were all creating new identities and new modes of ways of being together, which were performed for and therefore realised by Goldin’s camera.

Goldin has emphasised that her ideas about making a life in New York had as much to do with emulating 1930s femme fatale Marlene Dietrich as Warhol superstar Holly Woodlawn. Drugs were not just recreational, something they did, but existential, something that made them who they were. Goldin has asserted that doing drugs assured her she was not like her mother.13 Luc Sante, writer and denizen of that same downtown scene, has gone so far as to say, ‘One took drugs for fun, or maybe to stop up grief or despair, but most often to build a personality that could be taken out into the night […] Drugs were an inner make up.’14 The Ballad of Sexual Dependency documented the goings-on in this bohemian scene, particularly in relation to practices of self-fashioning with and against dominant discourses of identity, but it also functioned as a ritual for the production of an individual and a collective identity. In short the slideshow was just as prospective as it was retrospective. To assert that these complex processes of mirroring constituted performances is not to suggest they are in any way unreal or fake, but rather to acknowledge that the way they narrate life through mediated form did not lay hold of a pre-existent, self-sufficient reality, but rather aided in its production.

Can a single printed photograph, disconnected from the series, have the same effect? Encountering an image as an individual artwork on the wall at Tate, labelled Greer and Robert on the Bed, NYC, is a very different experience from seeing the same image as one among a stream of nameless projections in a bar, perhaps while seated next to Greer or Robert. It is, however, important to recognise that this migration through time and space, and translation across media, does not secure the image as documentary truth. The viewer’s remove from the context of the photograph’s production implies that its transparency actually diminishes. Instead the image actually offers even more of a mirror than it used to. The photograph reflects, not a literal image of the viewer, but invites reflection on their sense of what and who is pictured, as well as their relationship to them. 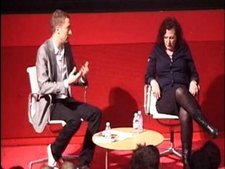 Nan Goldin
In conversation about her career and recent work with Stuart Comer, then curator of film at Tate Modern, 2007

TateShots: Nan Goldin
Interview with Nan Goldin, introducing her latest collection of photographs Eden and After 2014

, 'Nan Goldin, Greer and Robert on the Bed, NYC 1982', in Performance At Tate: Into the Space of Art, Tate Research Publication, 2016, https://www.tate.org.uk/research/publications/performance-at-tate/perspectives/nan-goldin, accessed 22 January 2021.