On the evening of 5 March 1968, performance artist Stuart Brisley arrived at the Tate Gallery for what had been billed in advance by the Sunday Times as a ‘demonstration’ and was described after the fact in the pages of Studio International as an ‘action-happening’.1 But Brisley was not meant to be performing that particular night. Top billing belonged to César, a French nouveau réaliste sculptor, who was to wow the formally attired audience – comprising Friends of the Tate (museum members) and their guests – with a live show featuring the production of a sculpture by a new and spectacular process involving quick-hardening liquid polyurethane. The event was a celebration of breaking boundaries: César’s new materials heralded the plastic possibilities of technological innovation and the live ‘action-happening’ format brought frontier experiments in artist-audience relations into the space of the museum. The Friends had never attended a reception like this before. To Brisley, however, the evening’s intended programme offered little more than genteel entertainment. Art, as he saw it, could only be served by intervening. With fellow artist Peter Sedgley, he removed portions of César’s completed work to the Tate’s front yard and set them on fire. Scant evidence of the incident itself survives, but the conflicts and questions it set in motion have only become more pressing. Particularly as performance is not only increasingly visible, but also canonical. Does performance bear a special relation to social criticism? If so, what comes of that capacity when performance moves from the fringe to the institutional centre? In other words, what is the difference between being on the inside and being on the outside?

César had gained acclaim for artworks made of cars crushed and compacted into dense, twisted, vaguely cubic forms that he called ‘compressions’ (fig.1). At Tate, however, he showcased his ‘expansions’, which reversed the formal logic of the earlier works. To make expansions, César poured pigmented liquid polyurethane – a recent invention in post-war plastics – into puddles that quickly ballooned and hardened into irregular, cloud-like foam shapes (fig.2). Critic Pierre Restany reported that, ‘The formally dressed audience gasped at this demonstration of chemical magic … Soon afterwards César invited the public to a collective orgy of foam-scratching and -cutting’.2 The audience broke the sculpture into pieces, with César signing some of the fragments and giving them away to visitors.

In retrospect, César’s event can be seen as sitting somewhere between Yves Klein’s Anthropométrie de l’Époque bleue 1960 – paintings he produced by having nude women douse themselves in his signature blue paint before they imprinted and dragged their bodies across canvases in front of an audience – and Piero Manzoni’s Merda d’artista 1961 – a series of sculptural objects, offered in edition, comprised of the artist’s own excrement in a signed and vacuum-sealed tin. César’s happening combined Klein’s theatrical showmanship with Manzoni’s meditations on the relation between an artist’s authorial persona and an artwork, adding to this heady amalgam both a technological triumphalism and an invitation to audience participation. Not only did the assembled guests witness the near-instantaneous production of a work of art through seemingly miraculous means, but they were also able to touch it, to manipulate and shape it and to bring some of it home, complete with the artist’s signature. Furthermore the happening brought artistic innovations associated with galleries dedicated to experimental contemporary art within the confines of a major museum. It was astute that the headline of the Sunday Times article mentioned above trumpeted ‘The Expanding World of Art’. The phrase called attention to the newness of the work’s staging, punning on César’s working method. Institutionally sanctioned fine art, it suggested, had now opened up to encompass the ‘action-happening’.

Brisley, however, took exception. The artist was a denizen of the art world’s margins and was used to performing in small galleries and nightclubs. He had not been invited personally to the event, but accompanied Sedgley, who had been invited, as his guest.3 Brisley, it is worth noting, recalls the circumstances surrounding the events of that night somewhat differently than does Sedgley. On Brisley’s retelling, the two snuck into the event, posing as BBC cameramen.4 According to him they were looking to cause trouble – more for Tate than for César, although the fact that the sculptor was attempting a performancethere certainly served to make César’s work a target. On this point about being motivated to intervene by a formal objection, a sense that this type of art could not be presented in this way in that place, Sedgley’s report concurs. As he puts it, they ‘agreed that it was not possible to plan a happening in an Art Museum since it contradicted totally the concept of an “unscripted event”.’5 When the ‘orgy’ of participation erupted, the two seized their moment and took a few chunks of the polyurethane foam, brought them outside, and impaled them on the iron railings in front of the museum. At this point Sedgley withdrew, considering the action complete.6 Brisley, however, had not yet found the form he desired and made his own effort to conscript the audience into his impromptu happening, finding a woman willing to strike a match and set fire to the foam.7 The material caught fire so swiftly and intensely that not only was the fire brigade called to subdue the blaze but Tate’s Board of Trustees was later moved to make an enquiry into how such dangerous material had made its way into the gallery in the first place. The minutes from the Board’s meeting of 21 March 1968 (fig.3) state that, ‘Both the staff and the Friends had taken every precaution beforehand to ascertain that the materials to be used by César were non-combustible … but on the event itself, César had used some different materials he had brought over from Paris.’8 The bemused tone of the advance press in the Sunday Times– reporter John Whitley was emphatically underwhelmed by his sneak preview – might indeed have pushed César to employ a more robust chemical cocktail than originally intended.

Brisley’s intervention serves as a window into the contemporaneous struggles concerning art’s social role. He had been trained as a painter at the Royal College of Art in the late 1950s but after travelling to Munich and New York following graduation he struck out in a different direction, guided by a new existential quandary. The question art needed to address was, he felt, ‘Why would or why should one make something, try to make art?’9 For him art institutions ignored this question altogether or only tacitly answered it, according to inherited traditions of quality, value and authorship. The key to arriving at new answers lay in reinventing art’s institutions from the ground up, in disturbing and reimagining habits and tastes. While one might argue that César’s spectacle burlesqued authorship to camp proportions, and thereby offered oblique critique of it, in the context of London in 1968 it appeared to Brisley and likeminded artists as an exemplar of a moribund system co-opting and denaturing experimental art.

Brisley could have asked for no greater proof of the success of his iconoclastic bonfire than that found in the official minutes of the Tate Board meeting in which, ‘Sir Robert Sainsbury reported that the party itself had been a success, but that aesthetically the evening was less satisfactory’ (fig.3).10 Brisley’s oeuvre consists of a sustained attack on entrenched artistic mores, whether setting sculpture alight, or sitting in a bathtub of rotting meat as in Bath Works 1974. Writing about Brisley in 1972, critic Hugh Hebert asserted, ‘Performance art is the misleading generic jargon, and it has the distinction of drawing on itself the kind and intensity of public ridicule that ensured Dada and Surrealism places in the history books: easy to mock, impossible to explain, the artist at his old game of goosing the bourgeoisie.’11 For Brisley performance was about antagonising the artistic establishment. His performances themselves, moreover, worked to describe the nature of that opposition. Hebert was writing about 180 Hours Work for Two People a 180-hour-long piece Brisley executed at the Acme Gallery in 1978. The piece dramatised the difference between an artist and a bureaucrat; Brisley assumed the role of each – artist when on the ground floor of the gallery, bureaucrat when upstairs. The man above stifled the creative potential of the one below, all the while collecting his own faeces, along with assorted other detritus. If the metaphor is indelicate, it is meant to be so.

The Acme performance provides a key to understanding Brisley’s political and aesthetic concerns in the 1968 bonfire. The action certainly irritated the institution but it also, whether intentionally or not, critiqued the notion of artistic expansion that César offered up. By removing the artwork outside the gallery and setting in motion the chaos of life around it – from starting the fire with the aid of partygoers, to the firefighters quashing the flames, to the Board meeting that tried to make sense of it all – the intervention demonstrated how narrow César’s supposedly radical innovations were.

However the conflict between inside and outside, official and unofficial art, staged in this performance is made more complicated because Brisley and Sedgely relayed their stories of this action during the César reception with a view to its inclusion in a history of performance at Tate. If performance must remain outside to maintain vitality, why bother worrying over its representation in a collection such as this? The lesson to be learned from the event and its recountings seems to be this: performance is not one thing unto itself – and not just because the memories it spurs might be multiple and divergent, but, more importantly, because there can be no easy equation of given forms or procedures with necessary political values or meanings. It is neither inherently critical of, nor complicit with its context. That kind of meaning derives only from how a work is positioned in relation to aesthetic expectations and institutional power, which themselves change over time, necessitating reappraisal, renegotiation and renewed contests over ownership and definition. Performance is always situated and specific, so when asking about the meaning of a performance, it is important to move beyond questions concerning the nature of performance and toward an analysis of how a given work sees and articulates its position within a particular social-political space. Furthermore a performance might elicit an awareness of a space or situation, prompting self-reflection in the audience. Or, as Brisley put it, ‘I like to think of participation as mostly in the head’.12 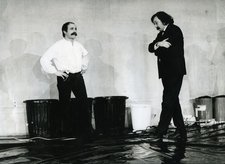 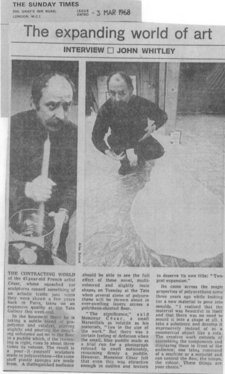