The invention of photography prompted speculation about the future of painting and whether this ancient medium remained relevant. But nearly two hundred years later artists continue to explore the possibilities of making images with paint. For many the flood of images from film, television, newspapers, social media and the internet has proved rich material for exploring the nature of representation.

In transforming mass-media images artists may use the physical qualities of paint to affect our response. Many have also been influenced by techniques from film and photography, zooming in or cropping to edit out unwanted information and bring new meaning to their subject.

Rendering similar subjects in contrasting ways, with different scales, techniques and compositions draws our attention to the process of painting and the impact of the choices that an artist makes. At the same time, these works might also prompt us to reflect on our ordinary habits of looking at everyday photographic images, and at the world.

Gaddafi 2 is one of three paintings by Sasnal based on images that emerged in the media following the death of Libyan dictator Muammar Gaddafi. Here he homes in on a group of rebel fighters, apparently looking down onto the corpse, which cannot be seen due to the close cropping of the image. One of the figures appears to be filming the event. Due to the increased availability of mobile technology, significant moments in history are now routinely captured by bystanders and posted online. Sasnal further mediates such images by translating them into paintings.

1/6
artworks in Painting and Mass Media

The third and largest of Sasnal’s paintings relating to the death of Muammar Gaddafi shows both the Libyan dictator’s corpse and a group of onlookers. All but one of the figures have been rendered anonymous by the close cropping of the image so that only their bodies are visible. In this treatment of the subject, Sasnal seems to refer as much to art history as to history, evoking Andrea Mantegna’s fifteenth-century depiction of the dead Christ through the dramatic foreshortening of the corpse while also echoing the monumental scale of history painting.

2/6
artworks in Painting and Mass Media

Dumas has made several paintings in which a figure lies face up with eyes closed and mouth open in an ambiguous pose. This shows Ulrike Meinhof, a member of the West German far-left militant organization Red Army Faction. Found dead in her prison cell in May 1976, she appeared to have taken her own life, although some claim she was murdered. The title acknowledges the source of the image: a photograph taken after Meinhof’s death, printed in the German magazine Stern. Dumas was interested in re-interpreting an image previously used by German artist Gerhard Richter, who made paintings based on the same photograph in 1988.

3/6
artworks in Painting and Mass Media

Painter and film-maker Wilhelm Sasnal uses photographs as a starting point for his work. Whether finding them by chance or seeking them out on the internet, he selects images he sees as open to interpretation. His three paintings based on broadcast coverage of the killing of Libyan dictator Muammar Gaddafi – made the same year – demonstrate how painterly concerns such as scale, technique and composition transform our relation to the image. Here Sasnal depicts the body of the deposed leader as an abstract mass of thickly applied paint to imply a visceral and violent death.

4/6
artworks in Painting and Mass Media

Dalwood depicts imagined interiors that act as memorials of places, moments or people. Here, London’s Central Criminal Court (known as the Old Bailey) is painted in a style that resembles a grainy newspaper image. The only sign of life is the distinctive red hair of former News of the World editor Rebekah Brooks. She was questioned at the Old Bailey in 2014 for her involvement in what became known as the ‘phone hacking scandal’. A police enquiry had revealed that the newspaper had intercepted the mobile phone messages of celebrities, politicians and members of the royal family.

5/6
artworks in Painting and Mass Media

Quarles began this work by transforming random, abstract marks into stretched human figures. The background derives from a digital sketch, painted in acrylic while simulating the look of 2D drawing software. Visible brushstrokes and paint drips contrast with the blue and green wall, drawing attention to the act of painting as a gestural and material process. Quarles compares this layering process to ‘the feeling of having my identity in constant flux, feeling my sense of self solidify and get rebuilt depending on context.’ Casually Cruel was painted in 2018, while the U S government was separating families at the US/Mexico border under President Donald Trump’s policy of ‘zero tolerance’. Listening to the news, the artist painted ‘the hedge wall and the figures being fragmented and isolated... I was thinking of how seemingly casual and careless the government was about something that had such significant psychological implications.’

6/6
artworks in Painting and Mass Media 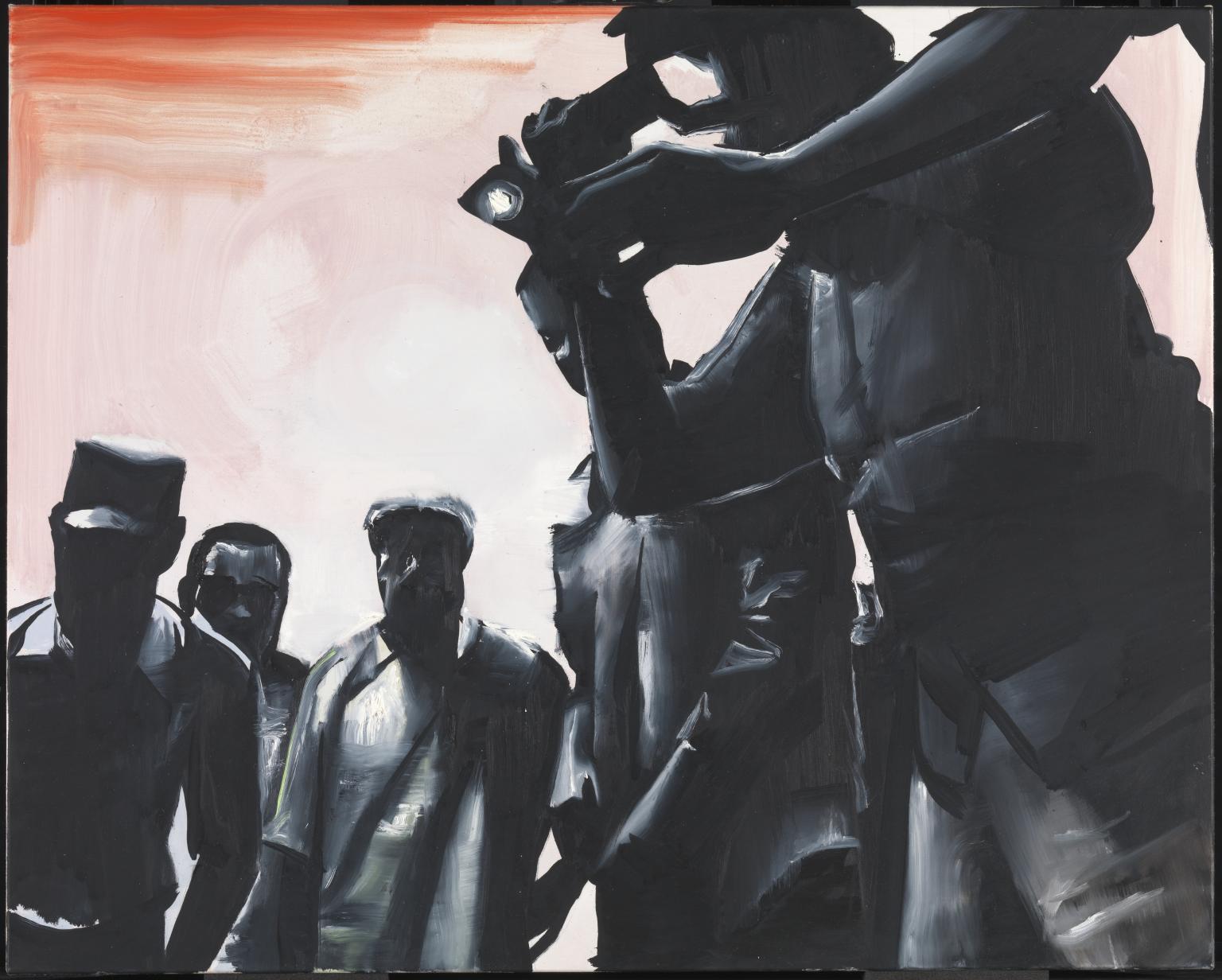 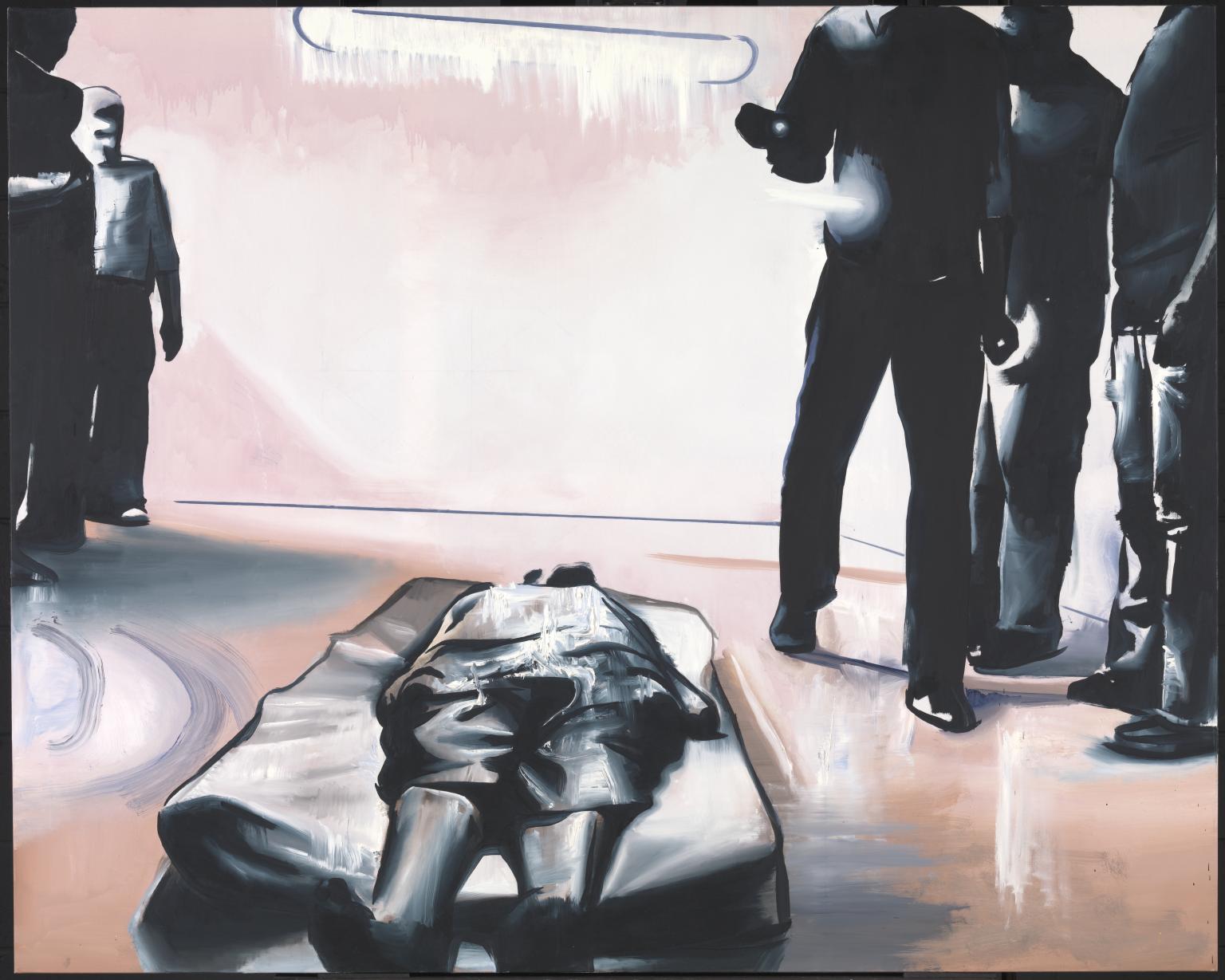 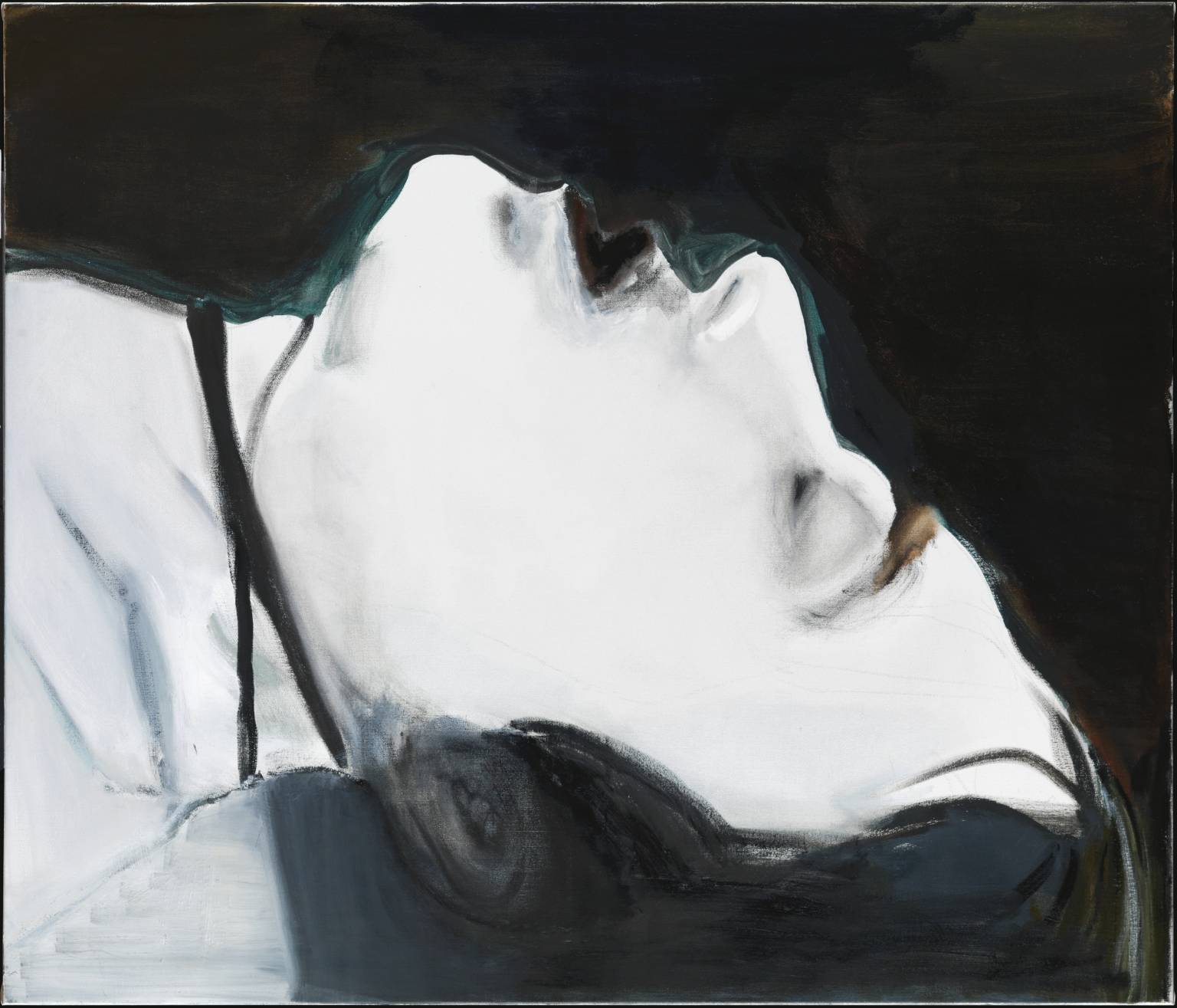 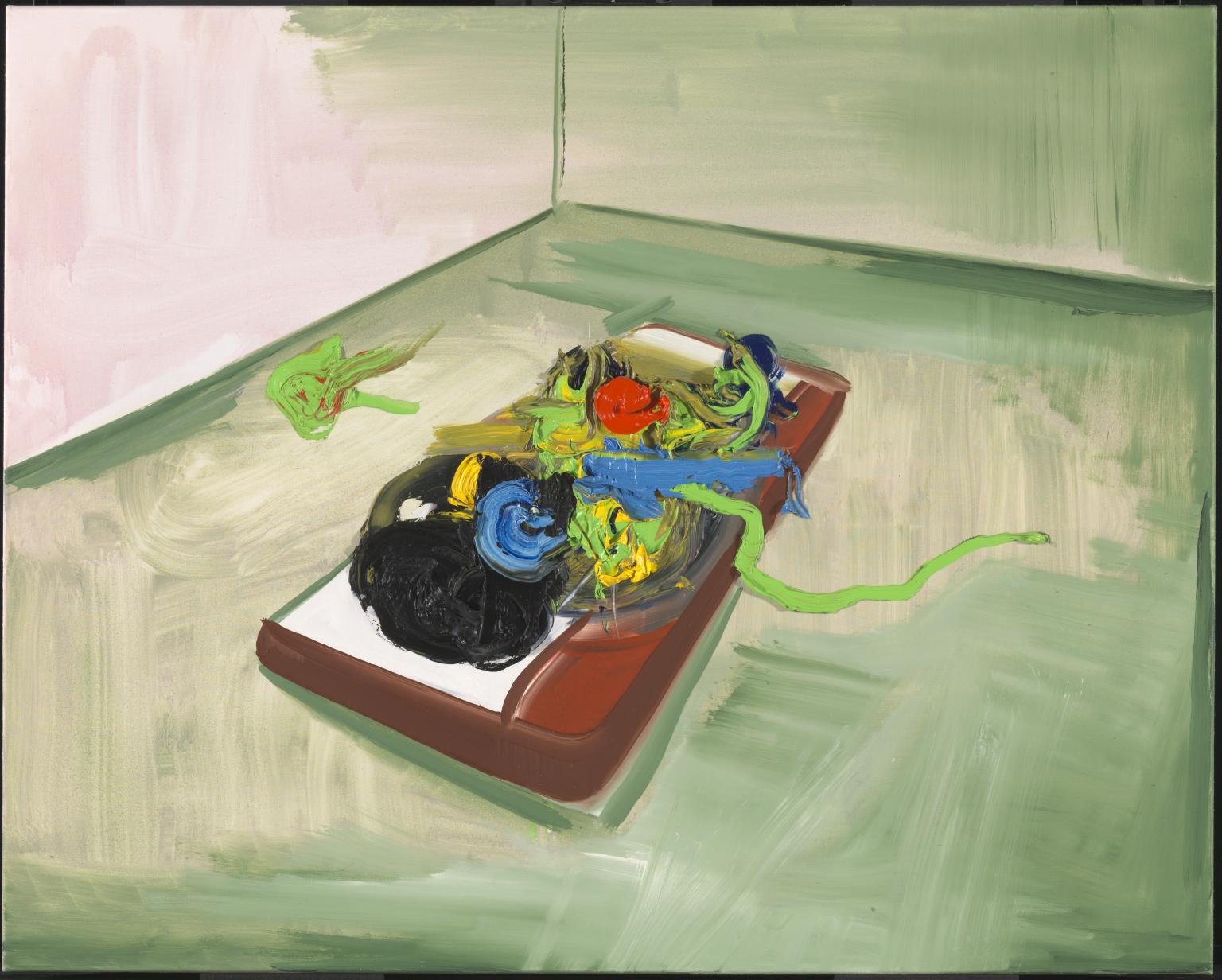 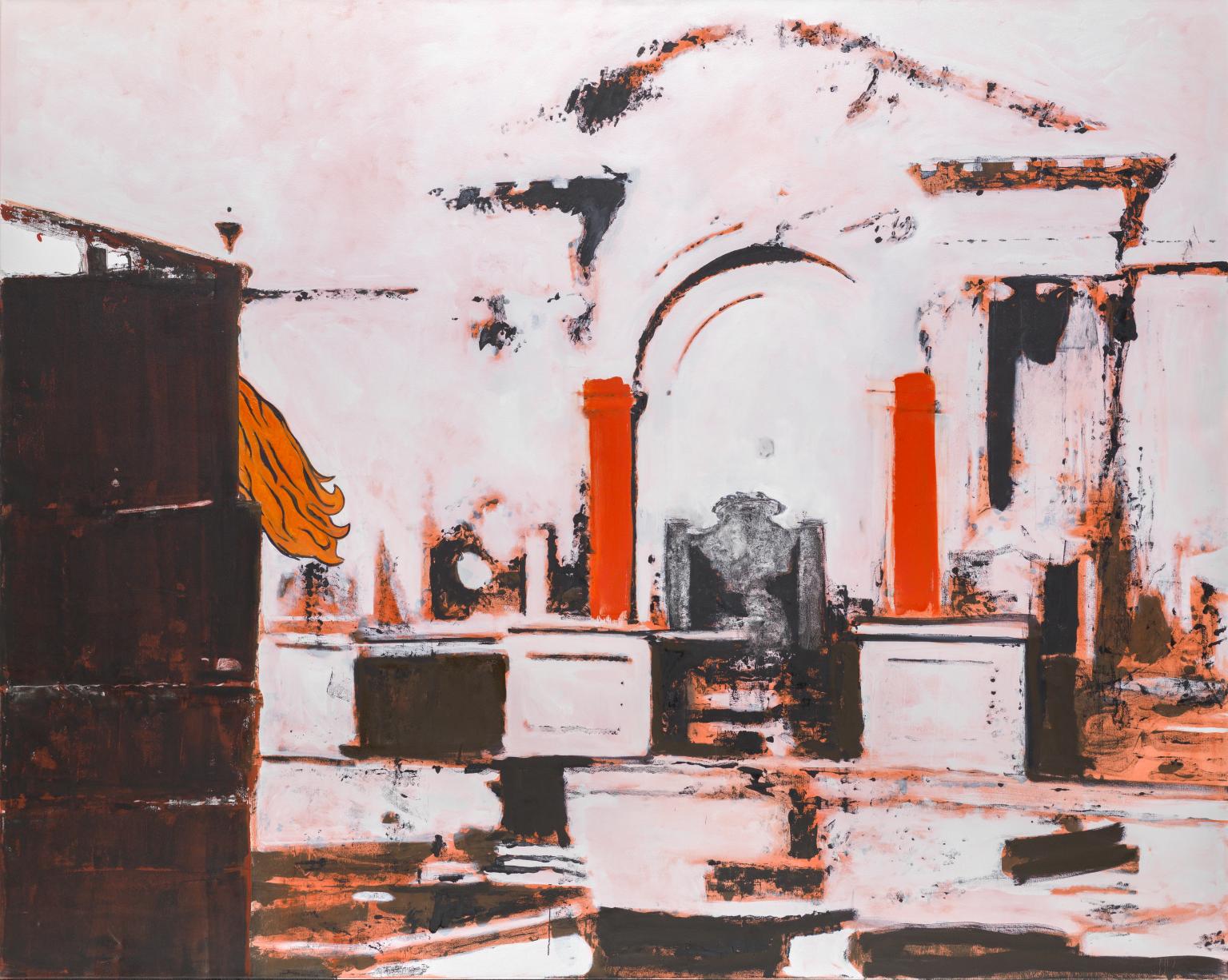 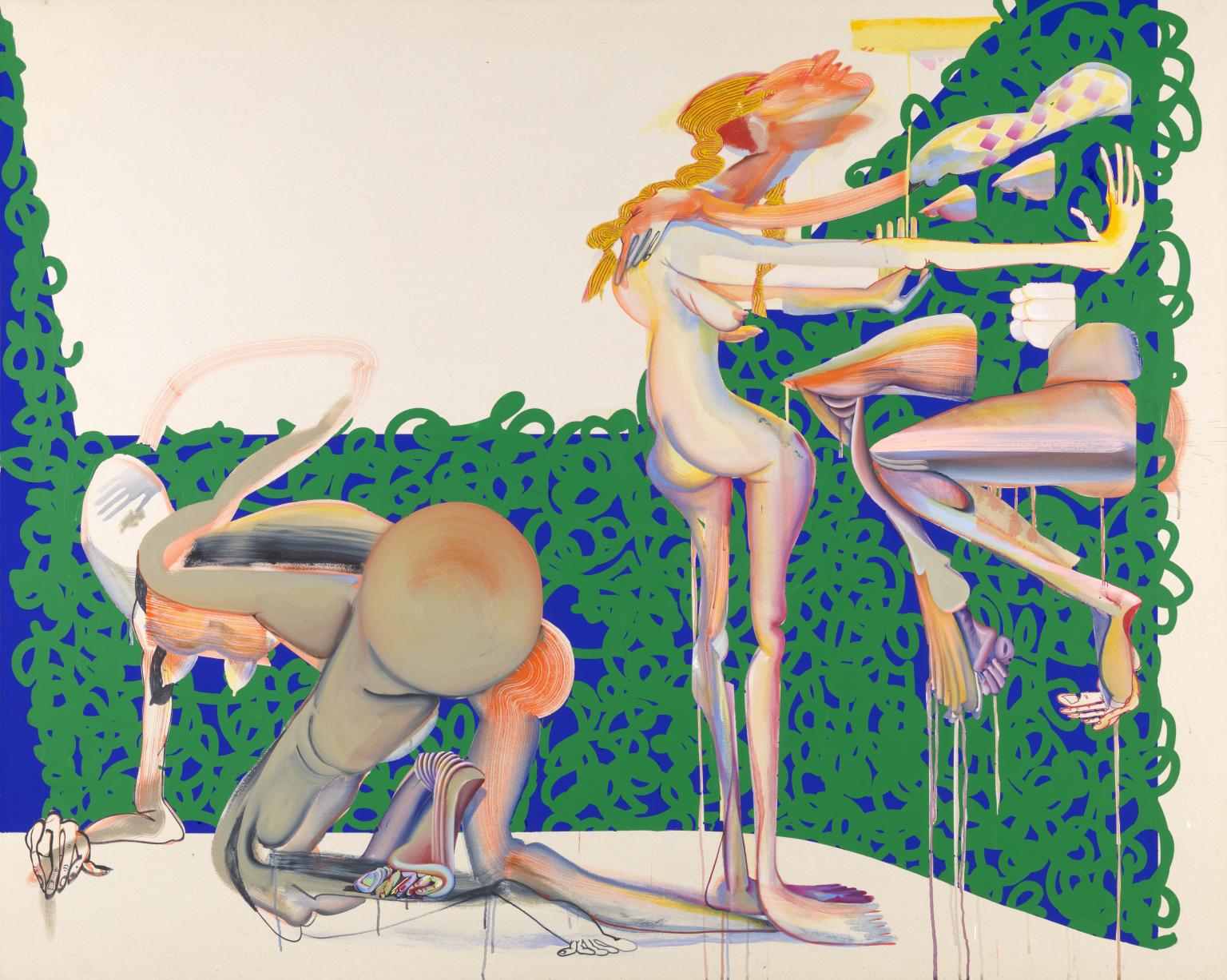