In 2012 the artist Aldo Tambellini performed three works in the Tanks at Tate Modern. Two – Black Zero 1965 and Moondial 1966 – were re-performances of older works, while the third was a new piece titled Retracing Black. All three were presented over the course of five days, between 9 and 14 October. Along with the artist and Tate curators, these performances were co-curated by Pia Bolognesi and Giulio Bursi and facilitated by Anna Salamone, partner of the artist.

These performances were part of a programme marking the opening of the Tanks, Tate Modern’s new reclaimed space dedicated primarily to live art. A number of artists working across film, installation, new media, performance and other live art forms were invited to present pieces from their body of work, as well as new pieces developed specifically for the space of the Tanks. Tambellini’s inclusion highlighted his contribution to experimental art in New York in the 1960s and offered him the opportunity to create a new work especially for the Tanks.

For Retracing Black, a new electromedia piece, Tambellini drew together his early work, while tracing his movement from painting to film to performance, through the colour black. 1 The focal point of the installation was three large projections of hand-painted films taken from the artist’s 1960s Black Film Series. These films, usually made with found footage with paint applied on top in abstract configurations, were enlarged through projection. Other previously unrealised film projects were incorporated into the 2012 projections, using images of 1960s New York and television coverage of significant events from the time, further linking Tambellini’s earlier and more recent work. Coupled with these large projections were five smaller monitors and three slide projectors, through which lumagrams – paintings on glass – were shown. These visual elements were accompanied by oscilloscope sounds and readings of poems by Calvin C. Hernton. Hernton was linked to the Black Art Movement and worked with Tambellini throughout the 1960s. These elements were drawn together to create a dynamic, almost overwhelming rush of images. Some were recognisable as television broadcasts, but others were abstract, casting distorted patterns of light and shadow across the space. The audience was, consequently, taken on a journey to historic moments while remaining present in the shifted illuminated landscape of the Tanks.

Tambellini also recreated two mid-1960s performance pieces: Moondial and Black Zero. Moondial included a central performance by a single female dancer – originally Beverly Schmidt, replaced by Daliah Touré at Tate Modern – whose costume was made up of hoops and plastic circles, including an imposing headdress. She performed a series of semi-improvised actions, while 160 hand-painted lumagrams were projected from two slide projectors. These projections took circular forms, which caused the dancer to be thrown in and out of light as she and the projections moved. The dancer also cast her own shadow onto the screen behind her, and used the hoops and patterns on her costume to create circles on the projected circles, within the darkened circle of the Tank itself. The performance was accompanied by a live electric cello, played by Seth Woods.

Black Zero is a continuously evolving performance, originating in 1965. It also includes manipulated slides, poetry by Calvin C. Hernton, electronic music and immersive projection, establishing these as some of the foundational and recognisable characteristics of Tambellini’s work. At Tate, elements of performances of Black Zero from the 1960s were represented through video and audio recordings, but this iteration also included live music from the electric cello, the real-time projection of original slides and the presence of the dancer. As with the new work, Retracing Black, Tambellini wove together his earlier works in contemporary presentations, in order to trace the changing practices of media-based and electronic art.

The Tanks provided a particularly effective backdrop for Tambellini’s work, which has long been preoccupied with blackness and darkness. The enclosed space, devoid of natural light, facilitated an immersive experience, allowing the audience to not just observe the dancer, the projections and the musical performances, but to become canvases upon which the interaction of light and dark could play out. The innovative presentation of these three works, which spanned more than fifty years, offered the audience an insight into Tambellini’s evolving practice over time, an understand of his importance within the history of electronic and new media art, and the opportunity to be submerged in the vibrant, abstract works he creates with multimedia techniques. 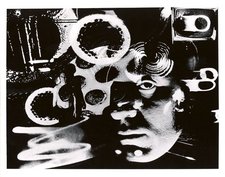 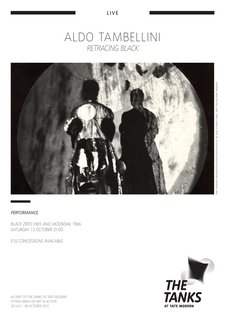