Choreographer and dancer Alexandra Bachzetsis performed From A to B via C with Anne Pajunen and Gabriel Schenker at Tate Modern on 23 October 2014 as part of the BMW Tate Live: Performance Room series. The walls and floors were white and further bleached by sterile, bright white lighting. There was no depth of perception in the space due to the flattening effect of the whiteness; it was not possible to see where the walls met the floor. All three dancers were dressed in Lycra bodysuits designed and made specifically for the project by Cosima Gadient. The suits were printed with photorealistic digital prints of the muscles in the body. However, when the bodies moved, the print on the suits remained static. The movements undertaken by the dancers were fluid and lethargic. The dancers only moved on the floor, occasionally using the wall as support, curling and stretching their bodies, and often rolling over one another. The dancers moved their bodies as if they had no bones. Attentive to every surface their limbs met, arms would bend over necks, or sometimes their whole bodies would slide through the gap between another’s legs. Through their slow, synchronised and controlled pace, it became evident that the three of them were moving as a part of one unified system. There was a sense of claustrophobia. The audio track heard by the audience was a narrative piece from an academic text about the movement and central nervous system of an anonymous creature. There were no references to the name of the animal.

The performance was derived from a longer piece that Bachzetsis designed for a theatre setting. It was performed earlier in October 2014 at Kaserne in Basel, and then adapted and restaged for the gallery environment the following week in the Centre d’Art Contemporain in Geneva. For the Performance Room version, one particular scene was excerpted from this full-length work and re-imagined for the online space. Part of the rationale for From A to B via C, in all three iterations, was to explore the effect of performing the piece in different contexts. The overarching theme of the work was an exploration of embodiment and disembodiment in online and physical environments. Bachzetsis, Pajunen and Schenker performed a collaborative and highly physical performance, and were then joined by the rest of the technical team for a question and answer session. The performance and the discussion became blurred, merging into one piece.

For the question and answer session with curator Catherine Wood, Bachzetsis invited the entire crew on-stage. Alongside dancers Pajunen and Schenker, they were joined by Gadient, research curator Hendrik Folkerts, and the sound engineer Tobias Koch. There was a deliberate symmetry in how everyone was dressed and positioned on-set, mixing muscle suits and flesh suits. Strips of red tape were affixed to the floor and technical wires were exposed. Folkerts expanded on the notion of artificiality and physicality in the discussion, explaining that ‘the online space is so often disembodied, but [the dancers] insert an extreme physicality within it through the choreography and costume. However, the fake appearance of the muscle animation on the suits then denies it. Embodiment and disembodiment is constantly at play.’1

In the discussion, the production team also revealed that the dancers had listened to different music in the space than that heard by the audience. They created a track of instrumental music that was intended to evoke feelings of the aquatic and weightlessness, which would help them find the right mood and style for the piece. Meanwhile the audience listened to a spoken text about an unnamed animal, which was actually an octopus, taken from a scientific library recording. Bachzetsis and her team alighted on the idea of the octopus when considering what it would mean to move with a body without bones. They studied the octopus in great detail, particularly how it can move its arms in different directions at the same time. The idea of an octopus reaching out towards multiple points despite being fixed in one spot mirrored the transmission of their performance broadcast to screens across the world.

From A to B via C was also inspired by the phenomenon of online tutorials. Bachzetsis said that the idea of ‘learning from a screen and playing with flatness’ was used as a ‘method and strategy’ to produce the piece.2Undermining the snappy soundbite format of the online tutorial phenomenon, they wanted to incorporate deliberately prolonged movement and insert an intriguing level of physicality in what was usually an anonymous and disembodied online space. The relationship between this and the project’s overarching interest in reworking performances for different institutional spaces came to the fore in the final moments of the conversation. After a question from Wood about the appropriation of pop music, Koch subtly cued the song Don’t Speak by No Doubt edited specifically for the Performance Room. The entire crew began to lip-synch and performed a synchronised dance while Wood watched. This surprising interlude signaled that the entire twenty-five minutes of the recording, rather than just the ten-minute dance, constituted the performance. Bachzetsis’s interest in how a performance can be adapted and shaped by its environment suggested that a question and answer session can be just as staged and artificial as a choreographed dance. 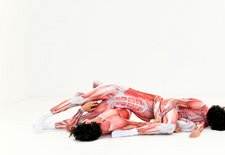 Alexandra Bachzetsis, From A to B via C 2014
Tate Live: Performance Room series, Tate Modern, 23 October 2014

Philomena Epps, 'Alexandra Bachzetsis, From A to B via C 2014', case study, Performance At Tate: Into the Space of Art, Tate Research Publication, 2016, https://www.tate.org.uk/research/publications/performance-at-tate/case-studies/alexandra-bachzetsis, accessed 13 April 2021.