On 29 March 2008 Tate Modern staged two happenings, Fluids and Scales, by the American artist Allan Kaprow. Fluids involved a group of participants constructing numerous rectangular enclosures made from blocks of ice and measuring 2.5 m x 9 m x 3 m, on the Southbank and on the Millennium Bridge outside Tate Modern. For Scales another group placed cement blocks on the steps of Tate Modern stairwells, which acted like new treads. The participants then climbed the ‘new’ stairs before collecting the blocks and repeating this process on the stairway on a different level of the building.

The performances were part of UBS Openings: Saturday Live, a series of bi-monthly performance events celebrating contemporary cultural practice at Tate Modern. The theme of this iteration was Happening Again. For both Fluids and Scales participants were invited to take part in re-stagings of works first initiated by Kaprow in the 1960s and 1970s, using scores, or instructions, created by the artist as the point of departure. Although closely related to the original performances the intention was not to replicate the earlier versions, but to experience the works anew in different contexts.

The first performance of Fluids was commissioned by the Pasadena Art Museum as part of Kaprow’s mid-career retrospective in October 1967. The action took place at different sites in Pasadena city. For the work’s reinvention at Tate, student volunteers from the art department at Goldsmiths performed the task. Beginning at 11.00 the students worked as a team to build an ice structure, first mapping an outline on the ground and then lifting the blocks, one by one, into place to create a foundation before building the structure up, layer by layer. The action was cordoned off by barriers, although the participants were watched by members of the public passing through the area. Once completed the structure was left to melt away, collapsing and eventually disappearing altogether.

Tate’s reinvention of Scales was staged on the same day, beginning at 14.00 and taking place on the internal stairwells of Tate Modern. The first performance had been staged in the stairwells of the California Institute of the Arts in 1971. At Tate fifteen participants (recruited via Tate’s website) undertook the process, starting on the first level of Tate Modern and moving through the building. Each participant placed a cement block onto a step of the main staircase and walked back down to the bottom, before the next participant performed the same action on the next step, until all of the blocks had been used. The whole group then climbed up the newly created stairs, before descending and re-collecting their blocks. This process was repeated on the second, third and finally the fourth floor stairwells of the building, at which point the action was reversed and the group came back down the same sets of stairs – laying their blocks, descending, collecting – until they once again reached the spot from which they had started. Members of the public were able to watch and follow the happening throughout, as it slowly progressed through the building.

Both reinventions presented a meditation on simple actions, spaces and materials, but they also involved participants working collectively and laboriously on tasks that were essentially unproductive or unstable in their outcome: the ice blocks in Fluids eventually melted away, the stairs in Scales moved continuously and then were removed altogether. For Kaprow these were the essential elements of a happening, as the simplicity and difficulty of the task allowed the participants to fully immerse themselves in their own physicality, their surroundings and the immediacy of the action. Alice Koegel, the curator responsible for the reinvention of the works at Tate, stated that Fluids and Scales were typical of Kaprow’s wider approach to performance, with their concentration on ‘physical labour resembling the planning, production and distribution cycles of the workaday world, but rendered unproductive in capitalist terms, with no tradeable end products’.1 Kaprow described the nature of such work this way: ‘It is art but seems closer to life.’2 In the fleeting and immaterial nature of Fluids and Scales, art and life meet, with life – spectacular and mundane – inspiring art and art becoming the means of experiencing life.

Regarded as the inventor and foremost practitioner of ‘happenings’, or ‘activities’ as he would later go on to call them, Kaprow’s work marks a turning point in the history of modern art. Kaprow began his career as a painter, although by the late 1950s he had turned his back on traditional forms of art, focusing instead on creating interactive and participatory events. Kaprow’s move from object to event challenged what an artwork could be by dissolving the boundaries between artwork, art making and everyday life. Often his radical performances – which also sought to break down distinctions between performer and audience – focused on commonplace, everyday activities or repetitive, meditative tasks, such as turning lights on and off again (Message Units 1972); waiting for an airport train (Baggage 1972); counting another person’s pulse (Pulse Exchange 1973); or painting objects and letting rainfall wash the paint away (Raining 1965). These happenings were often performed outside of galleries or museums and took place only once, with little or no remaining documentation.

Kaprow understood his approach as oppositional to ‘the traditional belief that the physical art object – the painting, photo, music composition – should be fixed in a permanent form’.3 Consequently, even though he did not authorise ‘re-enactments’ of his happenings, he did encourage their reinvention – giving permission for others to create new versions of the works without his presence. Tate Modern took up this invitation with the performance of Fluids and Scales, enlisting two groups of volunteers to help reinvent these seminal works. Preceding the performances, workshops were held to introduce the participants to each work’s concept and set of instructions, during which they collectively devised strategies, secured equipment and designed the structures needed to carry out the works. Following this, both happenings were acted out in public, taking place in transitional spaces at and around Tate Modern and therefore complying with Kaprow’s wish for art to be seen outside of environments specifically designated for art activity and taking up his notion of the museum as a site for action. 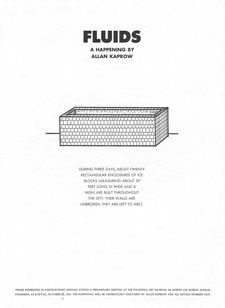