Flip Book is a choreographic work by the French dancer and choreographer Boris Charmatz. It was performed at Tate Modern in 2012 in the newly opened Tanks, a space dedicated to the display of film, installation, new media, performance and other live art forms in Tate Modern. Charmatz was one of a number of participants in the first programme, which invited artists to present pieces from their body of work, as well as new pieces developed specifically for the Tanks space.

For three days Charmatz, with a group of five other dancers, undertook open rehearsals, before presenting the piece Flip Book in its entirety over two consecutive days. Flip Book was the second iteration of Charmatz’s wider project which began in 2009 with the piece 50 Years of Dance. This series took David Vaughan’s 1997 book Merce Cunningham: Fifty Years as its source material.1 Vaughan’s book charts fifty years of the life and practice of avant-garde dancer and choreographer Merce Cunningham, illustrated with around 300 images. During the rehearsal period Charmatz and the five professional dancers experimented with recreating the forms and poses shown in the pictures, linking these together with dance movements to create a continuously moving tableau of the photographic images. The final performance was a rapidly paced run-through of each scene, from cover to the final image. The dancers created overlaps as one still picture morphed into the next, with the dancers running on and off the white dance floor, itself resembling the blank page of a book awaiting an image. The original book was displayed on a stand in front of the audience, with the pages being turned in line with the movements of the dancers.

In Charmatz’s earlier piece, 50 Years of Dance, dancers who had previously worked with Cunningham were invited to undertake the choreographic process.2 The third in the trio, Roman Photo, completed after Flip Book, saw non-dancers and amateurs perform the poses. A version of this work was developed and presented as part of the event If Tate Modern were Musée de la danse at Tate Modern in May 2015. Across all three versions, the Vaughan book provided the source material for the movements and poses shown. While the process of movement changed with each iteration, necessitated by the differing levels of experience and ability of the groups, the transformation of the participants into living documents, exploring moments from history, remained a constant there.

In this series of works Charmatz not only acknowledged the influence of a choreographer’s legacy on contemporary dance but also explored the potential impact of the physical traces left behind. This played on the traditional practices of dance’s transmission through notation and oral instruction, exploring the potential of the still image to be a means of creative, cross-generational communication. The final performance, with the book visibly present, intricately entwined visual document and the dancing body, the record and the live performance, and Cunningham and Charmatz’s visions and choreographies.

In Flip Book Charmatz juxtaposed the physical traces of dance from the past with the body of the dancer in the present. The photographs were brought to life, as the poses were made into movements. However, rather than discount the document, Charmatz included it in the performance – as a script for use in both the rehearsals and in the final presentation – highlighting the exchange of information between the page and the stage. 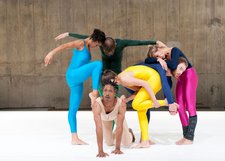 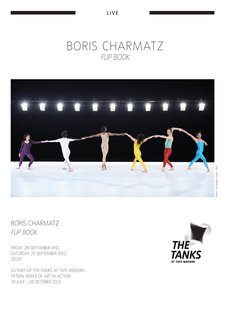