The Performance Room commission He’s in a Great Place! by British artist and filmmaker Cally Spooner, was a development from her live work And You Were Wonderful, On Stage, performed at Tate Britain in January 2014.1 For He’s in a Great Place! Spooner took some recorded elements of this earlier live work and, combining them with new aspects of recorded dance and live-streamed singing, transformed them into a film trailer, which both referenced her former work and speculatively gestured towards a larger film work, which had not yet been realised. It played with forms of public address, from a chat show format, which Spooner had created to mimic the set of Oprah Winfrey’s chat show, to the use of YouTube comments in a libretto, exploring disembodied internet comment through the heightened, and often melodramatic, form of the operatic voice.2 Designed for a space in which the live element could be experienced only through a digital, online platform, the work played with notions of the live and the manipulated, both in its content and its form.

The work itself consisted both of live operatic singing, by trained singer Veronika Benning, and pre-recorded elements of a chorus, along with contributions from other absent performers. These absent performers included both those who had performed the vocals recorded during And You Were Wonderful, On Stage, and pre-recorded dancers, who performed movements which mimicked the gestures used by prominent public speakers during their speeches. When the Performance Room went live at 8pm on 22 February 2014, Spooner intercut the pre-recorded footage with the live-stream to create a composite final production. This editing was all done, as Spooner put it, live.3 Images of Benning performing live were overlaid with the audio of the chorusperforming an operatic conversation of gossip and comment on well publicised events.  Despite its life primarily as a digital performance, curator Catherine Wood highlighted that one viewer had noted ‘Watching Cally Spooner’s performance, I thought it would be “live” not a recorded video’, emphasising the complex readings of what it means for an utterance to be ‘live’.4 In this case the viewer anticipated the performance to be happening in total simultaneity with the live stream, and found, instead, that the digitally ‘live’ was interspersed with elements of performance which had been manipulated prior to their broadcast. Despite being no element of physical liveness for the viewer in this iteration of Spooner’s work, some viewers prioritised certain types of live performance over others.

This observation by the audience member takes on a particular poignancy when understood alongside the content of Spooner’s work.  The work contains the singing of a selection of comments from a series of YouTube videos (originally broadcast elsewhere) in which the live and the manipulated are in disconnection in the mind of the viewer: Spooner used the video of American singer Beyoncé lip-syncing at the second inauguration of Barack Obama as 44th US President as an example in the question and answer session.5 Interspersed with this were elements of PR language, the repetitive rehearsal of corporate advertising, and further proclamations of disappointment at being misled about apparently live happenings. Spooner foregrounded her particular interest in the aggressiveness played out in the comment spaces attached to these digital platforms. She explored this through the use of the operatic verse as medium, itself often appearing aggressive in the close cut shots of Benning singing. In bringing these comments to light, Spooner highlighted the sense of betrayal felt by these viewers, between that which is thought to be live, and therefore genuine, and that which transpires to be recorded or manipulated, and therefore is seen as somehow deceptive. Like the events featured in her Performance Room commission, Spooner’s work was broadcast simultaneously across the world, through the Tate YouTube channel, opening itself up to questions and criticisms, which manifested themselves in comments around expected liveness. When seen in the guise of a trailer, broadcast and captured through the online platform of YouTube, Spooner’s form, in many ways, mirrored her content, playing with our expectations of liveness and, perhaps, suggesting that liveness itself is a shifting phenomenon in the contemporary, digital world. 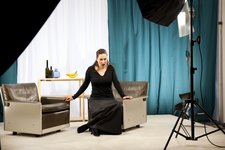 Cally Spooner, He’s in a Great Place! (A film trailer for And You Were Wonderful, On Stage) 2014
BMW Tate Live: Performance Room series, Tate Modern, 27 February 2014

Acatia Finbow, 'Cally Spooner, He’s in a Great Place! (A film trailer for And You Were Wonderful, On Stage) 2014', case study, Performance At Tate: Into the Space of Art, Tate Research Publication, 2016, https://www.tate.org.uk/research/publications/performance-at-tate/case-studies/cally-spooner-in-a-great-place, accessed 19 April 2021.