Intermezzo, a lecture-demonstration by London-based Argentinian artist Pablo Bronstein, was performed in the Starr Auditorium during the weekend event Characters, Figures and Signs at Tate Modern in 2009. The event explored the apparent differences between speech and movement, and considered the ways in which gesture and choreography could also be used as a language. Bronstein’s Intermezzo referenced body language, movement and contrived poses in the sixteenth-century French court, considering the power dynamics communicated through gesture and posture. Bronstein’s work took two approaches to this exploration, the first part being the delivery of a lecture on the work of French painter Antoine Caron (1521–99), focusing particularly on Caron’s Massacres under the Triumvirate (1566).1 Following this, Bronstein and dancer Adam Linder performed three examples of the titular ‘Intermezzo’, demonstrating the courtly gestures in practice.

One of Bronstein’s focuses in his discussion of Caron’s representation of courtly life in his painting, is the act of sprezzatura. This is a practice of movement, which, although it appears careless or effortless, is actually a well-studied and precise performance of certain actions and tasks, a term originating in The Book of the Courtier (1528) by the Italian courtier Baldassare Castiglione. Bronstein discusses this as a means of courtly affectation, whereby a courtier participated in the norms of courtly society but was able to hide their ambition and cunning behind these apparently effortless movements. This then lead to the over-posing of courtiers, which bled into courtly dances, like the minuet which Bronstein has used in previous works, and then into ballet practices. Examples of sprezzatura permeating Caron’s paintings are described by Bronstein as presenting a balletic interpretation of an historical event, focusing on the postures and positions of certain performers within the image, and particularly on the positioning of the King. In then highlighting the staged elements of the painting – he ponders whether the ruins in the background of the painting represent the Coliseum, in particular, or an anonymous ruined theatre – Bronstein presents the court as a centre of performance through gesture, of communication through body language, movement, and posture, as much as through spoken language. Passing mention was also made of the relevance of sprezzatura to contemporary society, considering the apparently unrehearsed but actually precisely choreographed speeches of many of today’s politicians.

As well as considering these courtly performances as represented in Caron’s paintings, Bronstein also introduced three short examples, which he termed the ‘intermezzo’, into his lecture. These intermezzos, Bronstein explained, often took the form of short plays or dances between larger acts, and on occasion were performed by members of the royal family. Bronstein selected three examples to present as the intermezzo between his own lecture and the forthcoming events. In the first, the artist Linder appeared in a golden mask and performed particular courtly poses, moving gradually between them, as Bronstein read a poem in the declamatory fashion appropriate to the period. Before beginning reading he emphasised to the audience how unfamiliar and odd this would sound as a means of delivery. In the second example both he and Linder moved around a central point on the stage, mirroring one another’s actions, while Bronstein explained this as a form of balancing composition in both painting and dance, demonstrating the difference between the performers turning to face one another, and being turned outward to engage the audience as a third party in their gestural conversation. The final demonstration utilised both Linder and Bronstein as gestural frames to a central religious icon, using their positions and postures as a way to locate power within the icon. Each sat to the side of an image of Christ being crucified, and performed slow, mirrored movements which seemed to defer to the image.

By demonstrating the practices of sprezzatura in dance alongside a lecture on its origins and social implications, Bronstein highlighted the presence of affected gesture not only in courtly society but also in the art objects and practices it left behind. He was also able to explore, through both painting and practice, theatre and the theatrical event as a particular site of power making through gestures. Bronstein’s work not only used the lecture as an art historical tool for the communication of ideas in and about Caron’s work but also as a way to demonstrate the communicative nature of gesture, posture and movement within dance, particularly in relation to historical social practices of the performance of the public self. 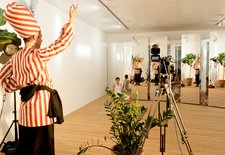 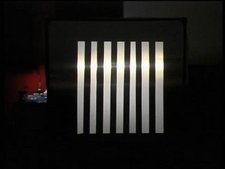