Icelandic artist Ragnar Kjartansson’s Variation on Meat Joy was streamed live online from Tate Modern on 24 October 2013. For this work Kjartansson transformed the Performance Room into a lavish Rococo style dining room in which ten actors, including the artist, sat at tables eating steak. The performance lasted 23 minutes and 10 seconds, beginning when the actors took their first bite of meat and ending once they all had finished their meals and put down their knives and forks.

Referring to Carolee Schneemann’s seminal 1964 performance piece Meat Joy, in both title and concept, Kjartansson’s ‘variation’ on the work sought to explore the carnal aspect of human nature through very different means. While Schneemann’s performance featured bodies writhing ecstatically and semi-naked among, for example, raw chicken, sausages and fish remains – performing what the artist called ‘an erotic rite: excessive, indulgent, a celebration of flesh as material’ – the bodies in Kjartansson’s piece, by contrast, appeared rigid and restrained.1 Adorned in eighteenth-century high-society costume, with powdered faces and white wigs, only the sounds of the performers’ eating, which was captured by microphones placed near each table, hinted at the animalism of their bodies.

Throughout Variation on Meat Joy the wet noises of chewing and the scraping of cutlery on china were amplified for the audience watching online. As such the carnal corporeality of eating infected the superficial refinement of what the artist called the work’s ‘gibberish Rococo’ setting.2 Mimicking the monotony of the actors’ prolonged mastication, the camera capturing the performance – which was stationed at head height, thus situating viewers as fellow diners – swept slowly across the room, panning repeatedly from right-hand corner to left-hand corner, until finally the performance came to an end. Although the exuberant set design and costumes seemed to promise high drama, the piece played with these expectations, situating a mundane experience in the extremely unreal setting of Tate’s Performance-Room-cum-Rococo-salon. Durational in quality – another gesture to the 1960s and 1970s performance referenced in the title – Variation on Meat Joy was intended to become of less and less interest to an audience, who had to struggle to pay attention, as the spectacle became a bore and watching or listening became laborious.

In much of Kjartansson’s performance work everyday action is theatricalised to the point of absurdity. Looped actions are often employed to draw attention to otherwise banal actions or incidences. Having grown up in a family of actors and theatre professionals, the artist commented in a post-performance interview with curator Catherine Wood that he has long been ‘fascinated by the theatre itself, but never the story in the theatre’.3 This concentration on the nature of theatricality and theatrical devices, rather than narrative, was made explicit in this performance for Tate, with the very ordinary acts of eating, chewing and swallowing put centre stage and displayed as performances in themselves. This blurring of reality and theatre – mixing the monotony of the everyday, of bodily functions, of the realities of existence, with the pretence of costume and set design – was not only the premise of this work but, Kjartansson suggested, a reflection of existence itself. Performance, he claimed, is ultimately how all our actions are mediated: it is ‘what we humans are about. We’re always putting on some kind of a show.’4 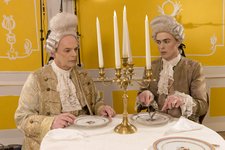