Les Yeux d’Argos was a BMW Tate Live: Performance Room commission by siblings Selma and Sofiane Ouissi. The performance took place on 18 September 2014, with Sofiane present in the McAulay Gallery at Tate Modern and a live video of Selma transmitted into the space from her apartment in Paris. The pair spoke and danced together via a monitor in the gallery, exploring connection and disconnection, presence and absence in the digital realm. As with all Performance Room events, the performance did not have a live audience but was instead broadcast via a live-stream and archived on the Tate YouTube channel. At the end of the performance there was a live question and answer session between the artists and Tate Modern curator Catherine Wood. The public contributed its own questions via social channels such as Facebook, Twitter and Google+.

Les Yeux d’Argos aimed to stage and break down the distinction between public and private space. On one hand, the performance was a public event, taking place at Tate and broadcast over the internet; on the other hand, it was partly situated in the artists’ private space and comprised their interaction, which the audience could witness via their own personal computers, in their own private spaces. The work therefore demonstrated how the boundary between public and private is permeated by digital technology. Yet, although the artists had a spoken dialogue and moved in response to one another, their words and actions were mediated by the camera, which was gestured to by purposeful glitches and pixelation designed by the artist Yacine Sebti.

Although the audience could see Selma and Sofiane interact, they could not participate. Sometimes they mirrored each other’s movements, while at other times the surrounding objects became bodily substitutes, for instance when Sofiane moved with the monitor as a stand-in for Selma’s body. However, as the dance went on the distinct movements of each dancer – Selma’s arms and Sofiane’s legs – combined as if forming a composite body only visible to the viewer at home.

The choreography of Les Yeux d’Argos was accompanied and interrupted by music and readings. The performance began with a conversation between Selma and Sofiane in which they discussed painful memories of London. This was replaced by J.S. Bach’s Flute Sonata in E minor, a reading of John Taggart’s The Rothko Chapel Poem – which describes the physical and psychic experience of being inside the chapel – and finally, after Sofiane abruptly exited the performance space, an actor reading an extract from George Perec’s Species of Spaces and other Pieces. Perec’s text reflected on space and habitation, gesturing to the different spaces illustrated and occupied in Les Yeux d’Argos, while Sofiane’s departure broke the sibling’s interaction and therefore the connection between the different spaces.

As choreographers and dancers, the Ouissis routinely collaborate across distance with the aid of internet-based communication. They first used Skype to present their dances to Sebti in the early years of the trio’s collaborative work. However, in Les Yeux d’Argos they used distance and technology to devise a choreography of separation. This choreography was incredibly detailed and had to be blocked by the dancers second by second, to achieve synchronicity and symbiosis. Despite this, there was also a sense of improvisation and fluidity as the pair relied on the mediated interaction to perform. In conversation with Wood, they elaborated on how their duality as performers was what strengthens the piece’s identity. Their natural flow was due to feeling part of one another, like reflections in a mirror, or shadows.1 In this way Les Yeux d’Argos oscillated between collapsing and affirming the distance between the siblings, testing how far they could remain together despite their separation.

The title of this work alludes to the mythical giant Argus, whose epithet Panoptes means all seeing. The omnipresent eyes in this performance, however, were not those of the performers or the viewers, but the unwavering and capacious lens of the camera. Although the camera’s eye may be all-seeing, it also malfunctioned, misrepresenting Selma and failing to see Sofiane after he left the gallery. 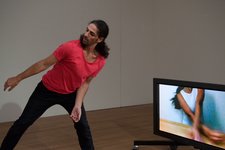