The performance of American choreographer and dancer Trisha Brown’s iconic work Man Walking Down the Side of a Building at Tate Modern in 2006 was the first re-enactment of the piece since its initial incarnation at 80 Wooster Street, New York in 1970. While it went on to be re-enacted at the Walker Art Centre in 2007 and the Whitney Museum of American Art in 2010, the Long Weekend performance marked the first transferal of the piece from the mostly deserted space of 1970s SoHo to the exterior of a significant public art museum over thirty years later. Aside from the change in the architecture against which the dance was performed, however, Brown’s piece remained unchanged. The work saw a solitary dancer, secured by harnesses, around the hips and waist, attached to a single cable, walk down the side of the building at a ninety degree angle to the wall. Compelled by gravity, but restrained by the harnesses, hoists and straps used to secure him, the performer exerted considerable effort as he performed the normally mundane task of walking. The performer descended the North side of the East Wing of the Tate Modern building, moving towards the crowds below. Where some forty people had witnessed the original performance in 1970, a significantly larger crowd gathered outside the museum to watch the re-enactment, an indication of the differences of the two public spaces the work had been performed in.

Man Walking Down the Side of a Building was one of Brown’s series of ‘Equipment Pieces’, which had initially used mountaineering equipment to construct hoists, pulleys and restraints to enable movement in unusual spaces, or in ways, which put the performers’ bodies at odds with gravity. In keeping with the relative simplicity of the equipment used, Brown also had the performer of this piece wear casual clothing and to perform to the ambient sounds surrounding the building, both in the 1970 iteration and at Tate Modern. Her intention was not to create a sense of theatricality but to draw attention to the simple and natural act of walking through a situation in an unnatural scenario. A key element of the work was its instructional nature; while all choreography is arguably instructional at one level, the simplicity of Brown’s instructions – to walk down the side of a building – placed the emphasis on the act of movement, rather than on its motivation or any kind of narrative. No particular instructions were given for how the performer should move, leaving them open to focus entirely on their own physical reaction to the duress of walking in this unusual position. This was characteristic of Brown’s work within the Judson Dance Theatre, which she helped form in the 1960s, and beyond, where she focused on everyday movements and their relation to dance through emphasis on individual gestures. Brown’s creation of choreography which focused on simple, singular movements also facilitated its capacity for re-enactment by making clear the integral elements of the work – a single performer walking down the exterior side of a building – but leaving enough fluidity for the transferal of those actions into different times and spaces.

In a work where the central performance itself remained stable, the differences in the context were thrown into focus. Where the original had taken place as part of a self-organised programme of Brown’s works ‘Dances in and Around 80 Wooster Street’, and was conducted outside of institutional authority, the re-performance at Tate was part of the museum’s programme, and was institutionally sanctioned. In the thirty-six years since its first presentation, Man Walking Down the Side of a Building had crossed institutional boundaries, not only at Tate but also the two other museum re-enactments that followed. However, despite these apparently significant contextual shifts, the core of the piece remained the same: the exploration of everyday life as choreography, through the portrayal of the struggle and artifice of a simple movement. By taking the universally recognisable act of walking and creating a scenario in which that act must be performed differently – in this case, at a ninety degree angle to the normal walking position – Brown remained focused not on the specificities of the space in which the performer acted but the precision of the actions which they undertook. Brown framed an everyday action as choreography and, in then re-contextualising it, drawing attention to the specificity of the movement under stress, she re-framed that action as performance, challenging the audience to consider the expansion of the site of dance into the world around them. 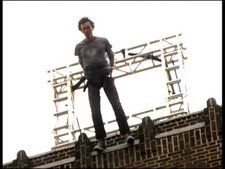 Trisha Brown, Man Walking Down the Side of a Building 1970
UBS Openings: The Long Weekend, Tate Modern, 29 May 2006

Acatia Finbow, 'Trisha Brown, Man Walking Down the Side of a Building 1970', case study, Performance At Tate: Into the Space of Art, Tate Research Publication, 2016, https://www.tate.org.uk/research/publications/performance-at-tate/case-studies/trisha-brown, accessed 20 September 2021.