Up Hill, Down Hall – An Indoor Carnival was guest-curated by Claire Tancons in collaboration with BMW Tate Live and took place on 23 August 2014 to coincide with the fiftieth anniversary of the Notting Hill Carnival in London. The event at Tate Modern consisted of five artworks all linked to the theme of carnival. It included an installation by Gia Wolff, a soundscape by Dubmorphology, two performances designed and choreographed by Marlon Griffith and Hew Locke, and a sculptural installation by students and recent graduates from Central Saint Martins.

Since 1954 the annual Notting Hill Carnival has offered a space for people to express and celebrate their culture. In its early years the majority of the population in this area of West London were immigrants, many from the West Indies, where there is a strong carnival tradition. Although it started in halls around London, the carnival eventually moved to the streets and became an annual procession.

This one-day event filled the Turbine Hall at Tate Modern, making use of its size through installation and sound. The carnival-style parades that utilised the length and breadth of the space also drew attention to the Hall as a space to move through. As well as using the Turbine Hall, Marlon Griffith’s work began with a procession from St Paul’s Cathedral, across Millennium Bridge and into Tate Modern.

Gia Wolff’s Canopy was the first part of the event to take shape at Tate Modern. The installation consisted of ten thick, red ropes which were strung in mid-air along the length of the Turbine Hall. Five were hung below the bridge and five above it, highlighting the different heights of the space. Referencing Oscar Niemeyer’s Sambadrome in Rio de Janeiro, which the architect created for the Rio Carnival in 1984, Wolff’s installation designated the Turbine Hall as a carnival space through minimal but striking lines of red that cut against the industrial grey of building fabric.

Dubmorphology filled the Turbine Hall with a soundscape titled Sonar. Through a custom-built sound system, positioned on the bridge in the Turbine Hall, Dubmorphology mixed together live and recorded tracks of reggae, steel pan, calypso and punk, with texts by authors who had focused on the Notting Hill Carnival in their work, as well as oral history recordings from those who had attended the carnival over its fifty year history.1 The completed work, performed live during the event at Tate, conjured carnival through sound and explored not just the musical styles associated with the event but also its wider cultural influences and intersection with personal histories.

The Sky is Dancing by students and recent graduates of Central Saint Martins was the final piece to explore the Turbine Hall as a space for carnival. Guided by artist Sonia Boyce and theorist Paul Goodwin, the students made small helicopter-style paper sculptures that were then released into the air, where they slowly floated down to the ground to be collected by spectators. The mass release and slow descent of the objects was reminiscent of ticker-tape, a material associated with carnivals and processions. The piece was grounded in the history of the Notting Hill Carnival, with the students exploring different elements of its social-political context, as well as looking at the design, music and movement it incorporates. This information and research was then translated into drawings and texts, applied to the paper from which the helicopter-style sculptures were made.

In addition to these three installations there were two choreographed performance works. The first was Marlon Griffith’s No Black in the Union Jack, which was designed to interrogate competing claims of authority over the carnival by juxtaposing images of the police with those of the carnival participants. The work comprised sixty performers in sharply cut, Correx sheet costumes designed to look simultaneously like hummingbirds – symbols of Caribbean identity – and police riot shields and body armour, alluding to the heavy police presence at the Notting Hill Carnival.2 The procession of these costumes began at St Paul’s Cathedral and continued through the Turbine Hall, accompanied by Elimu Paddington Arts Mas Band with whom Griffith had previously collaborated.

The second performance work was Give and Take by Hew Locke, which was realised in collaboration with the Batala Samba Reggae band. Locke used traditionally flamboyant costumes and masks, with a socio-political twist. A group of the masked performers were given sticks and shields, the latter of which were decorated with images of houses and properties from the Notting Hill area. Accompanied by the band these performers imitated carnival rhythms, hitting the shields with the sticks while herding audience members up and down the Turbine Hall, again mimicking the tactics of a police riot squad. Give and Take staged a confrontation between residents and participants over claims to Notting Hill’s streets, raising issues of ownership and gentrification. Both Griffith’s and Locke’s works utilised the performance of recognisable elements of carnival attire, rhythms and movements, juxtaposed with symbols of external confrontation and police power threatening not only the space of Notting Hill Carnival but diverse, heterogeneous culture and identity across the UK.

All five works shown as part of Up Hill, Down Hall utilised elements of carnival – from music and sounds, to movements and images – but each adapted them to the indoor structure of the Turbine Hall. All five pieces made carnival the theme of their work, both with specific references to the Notting Hill Carnival and to the larger idea of what carnival means to the cultures from which it originates and the cultures that embrace it now. 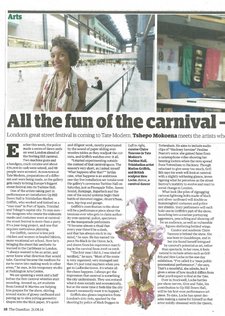 Tshepo Mokoena, 'All the fun of the carnival – with added turbine power', Guardian , 21 April 2014