The 2008 work Strangers by London-based Argentinian artist Amalia Pica was one of five live art collection works included in displays during the opening of the new Switch House building at Tate Modern in 2016. Alongside David Lamelas’s Time 1970, Tino Sehgal’s This is propaganda 2002, Roman Ondák’s Good Feelings in Good Times 2003, and Tania Bruguera’s Tatlin’s Whisper #5 2008, Pica’s work had a sustained presence over the first three weeks of the new building’s opening. The work consisted of two performers standing opposite one another approximately ten metres apart, holding a string of brightly coloured paper bunting between them. In the 2016 iteration, each performance lasted for four hours, with a team of three performers taking turns to hold the bunting between them. When not being used for this action, the bunting itself was displayed, hung on the wall next to the work’s wall label. Strangers was performed in the same place, in the second floor collection gallery of the Switch House, entitled ‘Between Object and Architecture’, once per day for three weeks. Of all the live art works shown over the three weeks, Pica’s was perhaps the most closely integrated with the collection displays; it was the only work to have a written label, was one of only two to be performed inside a collection gallery and remained present, either as performance or object, for the full three weeks of the live works programme.1

At its core, Pica’s work is a simple action: two people, holding a string of bunting between them. This action, however, becomes a much more complex social commentary when we are made aware that these two performers do not know each other, that they are the eponymous strangers. Pica states that the bunting string should be long enough that the two performers cannot easily communicate with one another without also including museum or gallery visitors in their conversation; while engaged in the same activity, and collaboratively creating the artwork, the participants are not so much performing together, as striving, in vain, to form a relationship within an artificially created social situation.

Strangers is a work which, despite the simplicity of the instructions given by Pica to her performers, contains multiple contrasting and contradicting images and actions. Central to this is the bunting itself. Typically, bunting is associated with parties and social gatherings, where communication and engagement with people – both friends and strangers – flows freely, and is not usually constrained by instructions given by others. It symbolises social occasions, and through these the organic formation of new relationships. In contrast, the use of the bunting in Strangers serves to highlight the artificiality of the situation the two performers find themselves in, engaged in the same activity and collaboratively creating an artwork, but unable to communicate verbally or pursue the creation of the social bond normally undertaken by strangers who are actively engaged in a task together. The bunting then becomes both the bond and the boundary between the two; while it forms the very literal link between the two performers, as they stand holding each end of the string, in having to keep it elevated, it also establishes the need for physical distance between them. Typically a symbol of social engagement, the bunting itself becomes the reason for the performers’ isolation.

The responses of the visitors – not so much an audience for a live performance, as observers of an art object – in comparison to the actions of the performers also highlight the differing layers of interaction and engagement allowed by the work. While the performers could not communicate anything to one another without engaging members of the public in their conversation, there were frequent occurrences of members of the public conversing one-on-one with the performers. This involvement from the public was anticipated by Pica, and she allowed the performers to respond briefly to questions about the work, and to direct those asking to the wall label. This happened frequently in the 2016 iteration, with members of the public engaging the performers in brief discussion about the work as a concept, about their own employment as performers, and about the duration of the piece, sometimes returning to confirm things or ask follow up questions. These interactions tended to be directed to only one of the performers, allowing for more intimate communication between performer and spectator than the work allowed for between the two performers. While both performers were able to communicate with members of the public, they were never able to have that same level of semi-private conversation between themselves. They remained engaged, as equals within the work, but always ultimately isolated from one another.

Overall, Strangers has layers of complexity, which are not, perhaps, initially made clear in the apparently stable, static image of two people holding a string of bunting between them. It is only in the close examination of the imagery of the bunting, and its role as a cultural marker linked to socialisation and freedom of communication, and the ability of the public to engage with the performers and the inability of the performers to engage with one another, that these strongly contrasting images and actions come to the fore.  Pica offers a comment on our abilities and opportunities to meaningfully engage in conversation and communication, by creating – for the performers – a symbolic act of engagement and exchange, within which the reality of meaningful communication and the creation of a relationship have been removed. 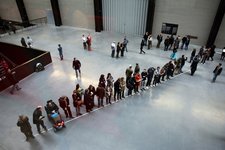 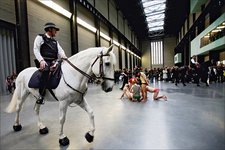