On 19 September 2013, Dutch artist Nicoline van Harskamp’s English Forecast was streamed live online as part of BMW Tate Live: Performance Room, a programme of events commissioned and conceived specifically for live web broadcast. Part performance, part participatory exercise, the work saw a team of four actors reciting what Van Harskamp has identified as the possible future sounds of the English language. Viewers at home were invited to join in the performance in real time by repeating certain words, sounds and phonemes, as instructed by the four actors at intervals throughout the thirty-minute piece. Members of the audience were asked to record themselves performing this task and to send their videos to the artist as possible material for future works attending to the concept of an expanding international English language.

Much of Van Harskamp’s work is concerned with communication theory. Previous performances – including New Latin 2010 and European English Exercise 2013 – interrogated the nature of language when reiterated by the mouths of non-native speakers and the linguistic, social and cultural implications of this process. For English Forecast Van Harskamp concentrated her study on English, which is fast becoming recognised as a kind of global language, or lingua franca. Although not the most widely spoken primary language in the world – surpassed by both Mandarin Chinese and Spanish – English is particular in that it has already become the official language of the most dominant areas of global capitalism and international politics and has the highest usage of any language among people who do not speak it as their mother tongue. As English is adopted, and adapted, by non-native speakers at a pace and ferocity that has never before been witnessed, Van Harskamp’s English Forecast delivered an imaginative foray into what the conditions of the language may be in generations to come.

Using Tate not only as the site of performance but also the site of research, Van Harskamp began work on the script for English Forecast by holding an open call for individuals who did not speak English as their native language. Held in Tate Modern’s Starr Auditorium, these one-on-one interviews with people of many different language backgrounds formed the basis of the later Performance Room piece. Interviewees were asked a series of questions by Van Harskamp, including: what languages they spoke; if they spoke English more than their native language; if language affected the way they acted or thought; and how they thought English would evolve as a language over the next ten to fifty years.

The recordings from this process were used to construct the dialogue for each of the thirteen short chapters that made up English Forecast and also to instruct the team of four actors employed to perform the piece live. During the performance these actors, all of whom had different mother tongues themselves, recited Van Harskamp’s text of English words and sentences collected from her conversations at Tate with native speakers of Arabic, Bulgarian, Cantonese, Dutch, Estonian, Ewe, French, German, Greek, Hebrew, Icelandic, Igbo, Indonesian, Italian, Japanese, Jola, Luganda, Mandarin, Patois, Polish, Portuguese, Punjabi, Russian, Serbo-Croatian, Singhalese, Singlish, Sheng, Spanish, Swahili, Tagalog, Turkish, West African Creole and Yoruba. Drawing from the wealth of sounds produced by the many different variations of English spoken by the international participants, the dialogue for English Forecast included the full range of consonants and vowels sited by the International Phonetic Alphabet, a notation system for the totality of sounds that can be made by speech.

Throughout English Forecast, as the actors performed the script in a host of nuanced accents, a new, global language seemed to emerge from a patchwork of seemingly novel phonemes, words and grammatical constructions; their mouths evoking the potential English of the future, in all of its variations and complexities. Indeed, setting the performance within the all-black interior of a sound-proof booth – the actors faced the audience, their eyes gazing through the lens of the camera – Van Harskamp created the appearance of a digital séance. Performance Room curator Catharine Wood commented that the performers seemed to be literally ‘speaking in tongues’, as if channeling information from some unknowable force.1

The script for English Forecast variously addressed the positive and negative aspects of the development of a new global language; the dialogue, pinched from a swathe of actual conversations, swaying disjointedly from welcoming acceptance to words of caution. Indeed, noting the threat a dominant lingua franca poses to lesser spoken languages, Nicoline van Harskamp suggested in a post-performance interview that the work was as much ‘a discussion about the preservation of languages’ as it was about their adaptation and potential disintegration.2 The work as a whole, however, called more generally for an engagement with language and the possibilities it brings; a sentiment exemplified by Van Harskamp’s invitation to the audience to repeat and record their own versions of her new words and sounds. Not only did this invitation provide possibilities for the work to be extended and elaborated upon by the artist in the future, but it also gave the audience a space in which to explore the elastic, malleable and creative potentials of speech; ultimately resisting the idea of language as either static or objective in nature. 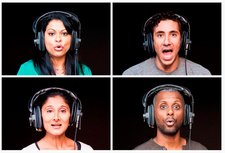