Room 12 in In the Studio

The six paintings in this room were conceived by Gerhard Richter as a coherent group, named after the American experimental composer John Cage

Since the early 1980s, Richter has frequently made abstract works by applying layers of paint, and then wiping a squeegee across the surface. As the upper layers of paint are dragged across the canvas, earlier moments from the painting’s creation are allowed to resurface.

The Cage paintings are the outcome of several layers of painting and erasure. Their surfaces are animated by lines where the squeegee has paused, by brushstrokes, other scrapings, and areas where the skin of oil paint has dried and rippled. The paint seems delicate and fluid in some areas, coarser and more solid in others.

Richter was listening to the music of John Cage while he worked on these paintings and titled them after the composer. There are no direct links between any particular work in this series and any piece of music by Cage. However, Richter has long been interested in Cage’s ideas about ambient sound and silence, as well as his controlled use of chance procedures in musical composition.

Cage (1) – (6) 2006 is a group of six large, square abstract paintings by the German artist Gerhard Richter. Three of the canvases measure 2900 x 2900 mm, while the other three are slightly larger, at 3000 x 3000 mm each. The paintings all have a similar thickly painted surface that is rough and textured in appearance. They are composed of a progression of horizontal and vertical bands and a series of multi-directional scratches and indentations that are scraped into the painted surface. In specific areas of the paintings, the upper layers of paint have been removed and several sublayers of colour exposed. In each painting, the layers of colours and the composition of the bands and marks are different. Cage (1) is predominantly lime green in hue with a wide bottle green bar running horizontally across the upper quarter of the composition, and at the far right of the work is a wide vertical band composed mostly of white, but also containing yellow and green. Cage (2) is largely pale grey, white and lime green, with small exposed areas of bright red and charcoal grey. Cage (3) is composed of multiple scratch marks and indentations and is mostly light grey and white, with small patches of lime green, bottle green, dark grey, blue and red. Cage (4) has multiple sublayers of paint exposed, while Cage (5) is predominantly grey with white, red, pale yellow and a small amount of black. Cage (6) is the most varied in its range of exposed underlying colours, but it overall composition is mainly green, white, yellow, black and blue. The paintings are designed to be hung together in one large gallery space. 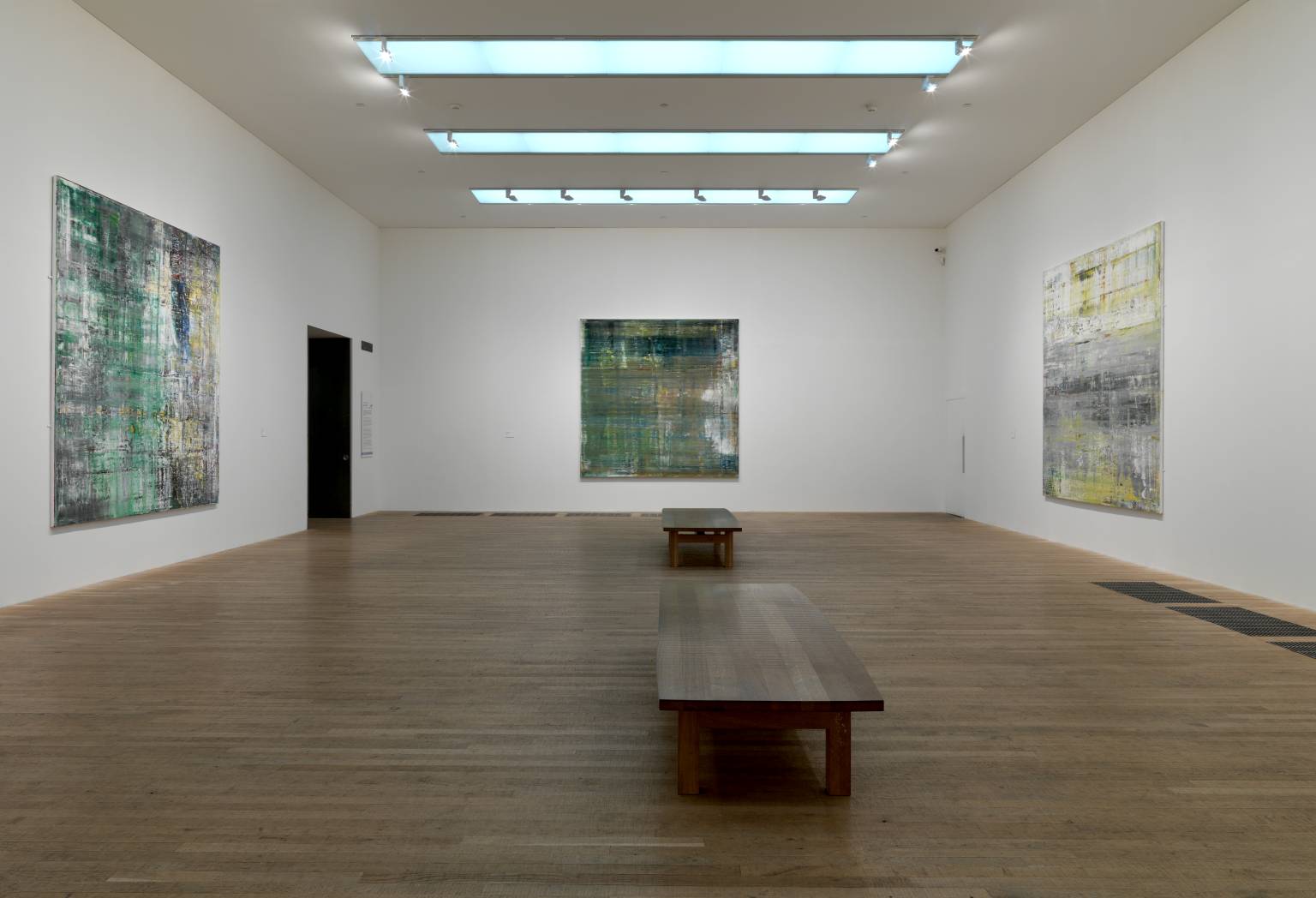