Pop art engages with the mass-produced imagery of popular culture. It is often thought of as a North American and British phenomenon, but in fact a wide range of different cultures and countries contributed to the pop movement during the 1960s and 1970s.

What unites the diverse work in this room is the presence of figures or other recognisable forms – a reaction to the dominance of abstraction in mid-twentieth-century art. The imagery is often borrowed from advertising and the popular press, and many works mimic the bold shapes and colours of product packaging or signage.

But as the works here show, drawing on popular or commercial sources doesn't lead pop art to celebrate consumerism. Instead it can encompass a range of responses, from cool irony to subversive social critique.

This painting is based on the writings of Russian author Isaac Babel. During the Polish-Soviet War of 1920, Babel accompanied the First Cavalry Army as a war correspondent. He documented the bitter realities of war in a collection of short stories titled Red Cavalry. Following Joseph Stalin’s ascent to power, these stories were withdrawn from sale, due to their negative reflection on the Red Army. They did not return to bookshelves until after Stalin’s death in 1953.

1/20
artworks in Beyond Pop

Paolozzi’s sculpture is part cityscape, part elaborate machine. He describes it as an ‘urban image’. The wheel, a recurring motif in his work, symbolises technology. Instead of using existing pieces of scrap metal, as he had in earlier sculptures, he started from scratch with this work. He designed a series of geometric units made from wax. Then, a team of assistants cast them in aluminium, before welding and painting them according to his instructions. This process, in which the artist is removed from the actual manufacturing, has been called ‘industrial collage’.

2/20
artworks in Beyond Pop

Whaam! is based on an image Lichtenstein found in a 1962 DC comic, All American Men of War. Lichtenstein often used art from comics and adverts in his paintings. He saw the act of taking an existing image and changing the context as a way of transforming it’s meaning. Lichtenstein was interested in emotional subjects, such as love and war. His work takes on these themes in a distant and impersonal way.

3/20
artworks in Beyond Pop

Chryssa was one of the first artists to use neon, previously just an advertising tool. She moved to New York in the 1950s and said she was inspired by Times Square ‘with its light and letters’. This work is made of sixteen blue neon forms housed in a grey Plexiglass structure made to resemble the night sky. The repeated forms are fragments of the letter ‘S’. Chryssa said, ‘I have always felt that when things are spelled out they mean less, and when fragmented they mean more.’

4/20
artworks in Beyond Pop

The sculpture incorporates an array of communist symbols, including the red star, hammer and sickle and military banners and medals. Made when the Soviet Union was on the point of dissolution, it celebrates an empire that does not exist with deliberate irony. Orlov has investigated the idea of ‘imperial style’ in several works. It is, he says, the ‘showy façade,’ masking darker, dirtier historical realities; the play between the two is, in his words, ‘the essence of empire’.

5/20
artworks in Beyond Pop

For most of the 1970s and 80s, Orlov worked at the heart of Moscow’s non-conformist cultural scene. This relief depicts a military hero in profile, highly simplified and dwarfed by medals displayed across his torso. The absurd exaggeration of the scale of these military decorations, which overwhelm and almost obscure the ‘military person’ himself, comments on the inflated status of Soviet officials. Orlov drew on various visual references including totem poles, early Russian portraiture in which the nobility were portrayed as secular icons, and the Russian avant-garde.

6/20
artworks in Beyond Pop

In Valentine Axell combines an idealised feminine silhouette with a spacesuit helmet. It was made during the 1960s space race, when the United States and the Soviet Union competed for dominance in space exploration. The title refers to Soviet cosmonaut Valentina Tereshkova, the first woman in space. Axell presents her as both a feminist heroine and a sexualised figure. Axell’s paintings have been described as a ‘sexual revolution in art’. They combat gender discrimination, linking women’s political and social freedom with female sexuality.

7/20
artworks in Beyond Pop

Paolozzi began making machine-like structures in the early 1960s. He said he wanted to eliminate ‘arty’ qualities from his work. Instead he aimed for an impersonal, engineered feel. The elements in this work are a mixture of castings from ordinary machine parts with castings from forms designed by the artist. He described his raw materials as ‘things that nobody would give a second glance... Part of the battle is to try, and resolve these anonymous materials into ... a poetic idea’.

8/20
artworks in Beyond Pop

Viktor Pivovarov, (He) Hit Me with a Hammer and Burst into Tears  1992

(He) Hit Me with a Hammer and Burst into Tears 1992 is a painting in enamel on canvas mounted on fibreboard. It combines image and text, presented in a comic book style. Two women sit drinking tea at a dining table, one listening attentively as the other laments her husband’s violent behaviour. Her words (which give the work its title) are presented in Russian script in a text box in the top right hand corner of the painting. A bed in the background locates the scene in a Russian communal apartment, where a single room often served as bedroom, dining room and lounge. The muted colours and bichromatic design enhance the resigned postures of the two women, imbuing the work with a sense of ennui that conflicts with the drama of the situation they are discussing.

9/20
artworks in Beyond Pop

This is Radio Moscow … 1992–6 is a painting in enamel on canvas mounted on fibreboard. It combines image and text, presented in a comic book style. The painting depicts an apartment room at twilight rendered primarily in dark blue. A door opens into the room, through which a view of the sun setting behind a neighbouring apartment building, painted in a bright yellow, is visible. On a table in the foreground are a lit lamp painted in a slightly darker yellow, an open book and a half-drunk glass of tea. The Russian text that runs along the bottom of the painting and gives the work its title provides an exact time for the scene, relaying an announcement on an unseen radio: ‘This is Radio Moscow. The time in Moscow is 19 hours 30 minutes. The next show is “Theatre at the Microphone”…’ The text and objects suggest the recent presence of the apartment’s resident. However, the human figure is absent, an omission accentuated by a partly obscured portrait hanging on the wall, which shows the outline of a male bust with a blank face. Despite the seemingly innocuous and tranquil setting, these absences suggest a sense of unease and menace.

Fast food was a typical subject for pop art in the 1960s. It represented consumerism and a new fast-paced society. Many artists in the 1960s celebrated consumption. But Self’s Hot Dog Sculpture focuses on the darker side of the decade. The blackened hot dog relates to military conflict. Its charred appearance reflects Self’s anxiety about a possible nuclear war.

In 1966 Sundaram moved to London from India to study at the Slade School of Fine Art. Here he was influenced by British pop artists, such as David Hockney and Richard Hamilton, as well as his American tutor, the artist R. B. Kitaj. Sundaram started making paintings referencing political issues using the bold colours and shapes of pop art. This painting refers to the student protests and civil unrest that broke out in Paris during May 1968. Recognisable forms, including a police helmet, flame gun, barricades, and a figure behind a tree, are suggestive of a troubled street scene.

Fougeron was the leading artist associated with the French Communist Party in the early 1950s. Here he caricatures the increasing Americanisation of Europe, then a major target of Communist Party propaganda. Fougeron’s style plays on the comic -strips associated with American culture. A businessman greeting an American car embodies capitalism. The composition is full of elements that imply criticism of the French colonial wars in Indo-China and North Africa, the continuing nuclear threat and the exploitation of the underprivileged. The electric chair on a pedestal refers to Julius and Ethel Rosenberg, American citizens convicted of spying for the USSR.

This wall-mounted sculpture turns an explosion into a stylish icon. There is no sense of any resulting destruction. Lichtenstein made this sculpture at a time when the USA was heavily involved in the Vietnam War. It is based on an illustration in a popular boys’ comic that focused on the Second World War. The blue steel mesh with its regularly punched holes relates to the Benday dots used in printing of comics and newspapers.

Wang grew up during China’s Cultural Revolution, an era of radical cultural, political and social change. In the 1970s he worked as a painter of propaganda posters. During the 1980s, government reforms led to a shift away from China’s previous communist system towards increasing levels of foreign investment and consumerism. Wang sought to unite these opposing forces on the canvas by bringing together popular political and commercial symbols in a style that came to be known as 'political pop’. In doing so, he aimed to depict the reality of Chinese society. Chinese communist imagery and Western logos and brands appear together, alongside numbers representing Chinese barcodes. 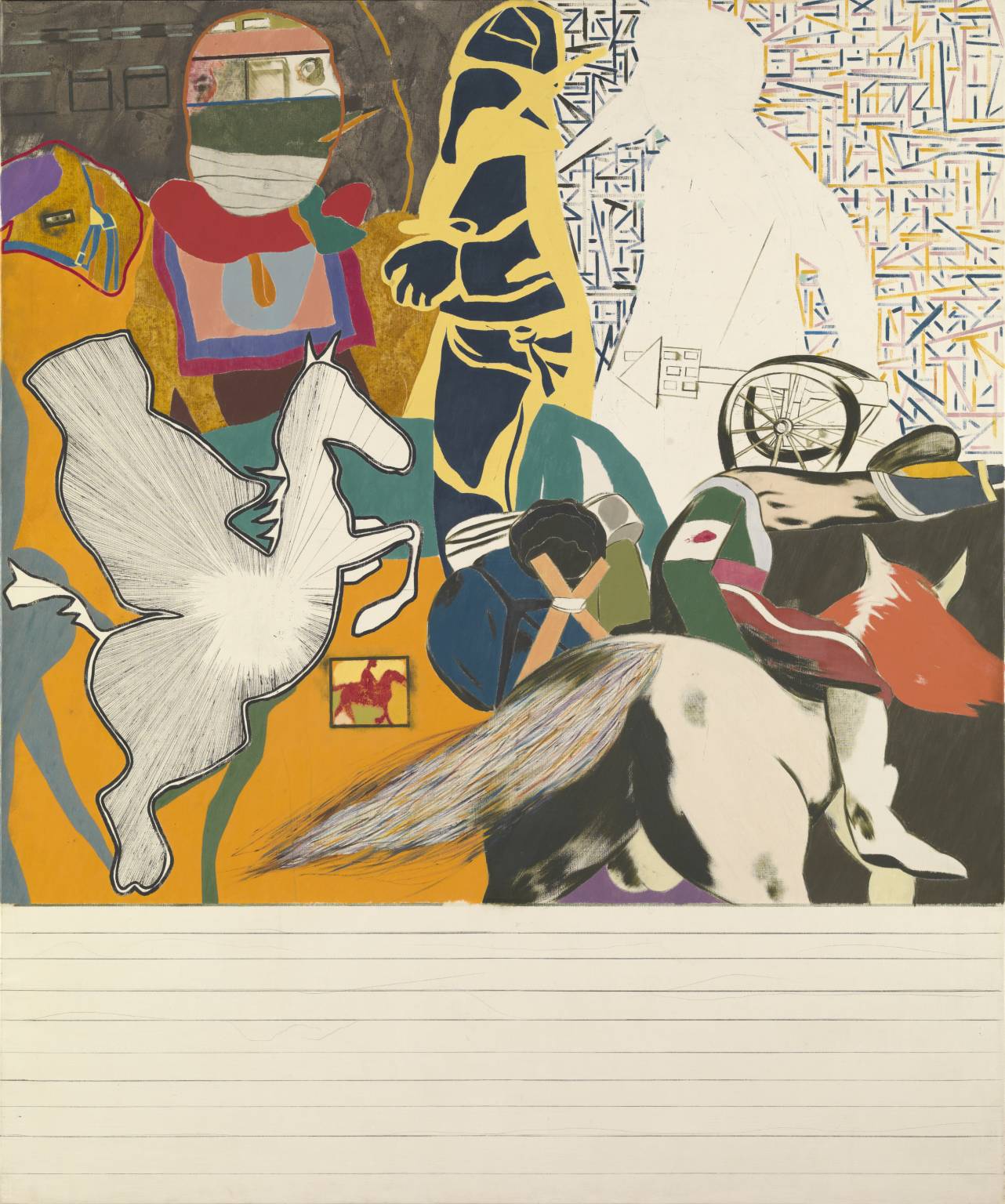 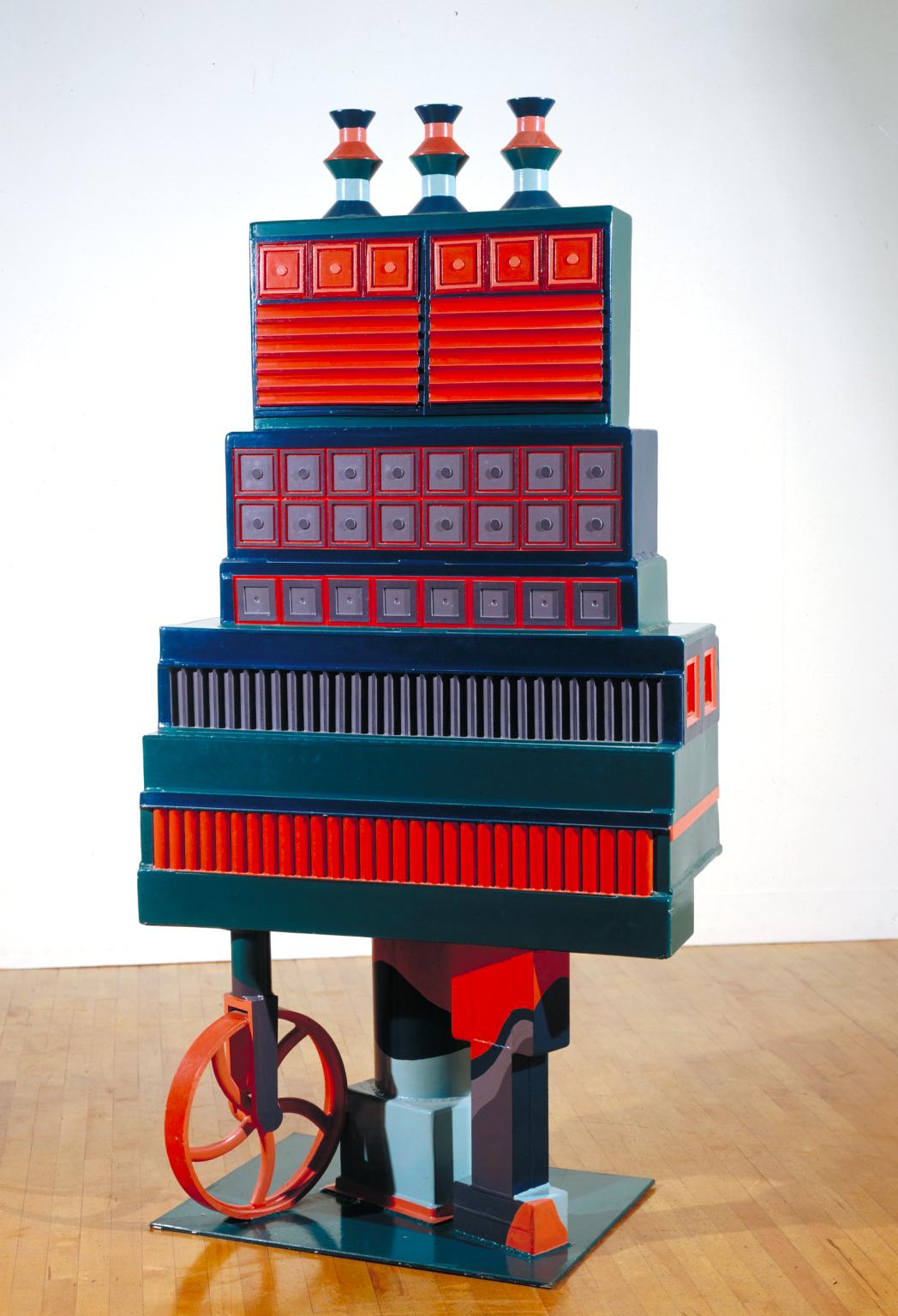 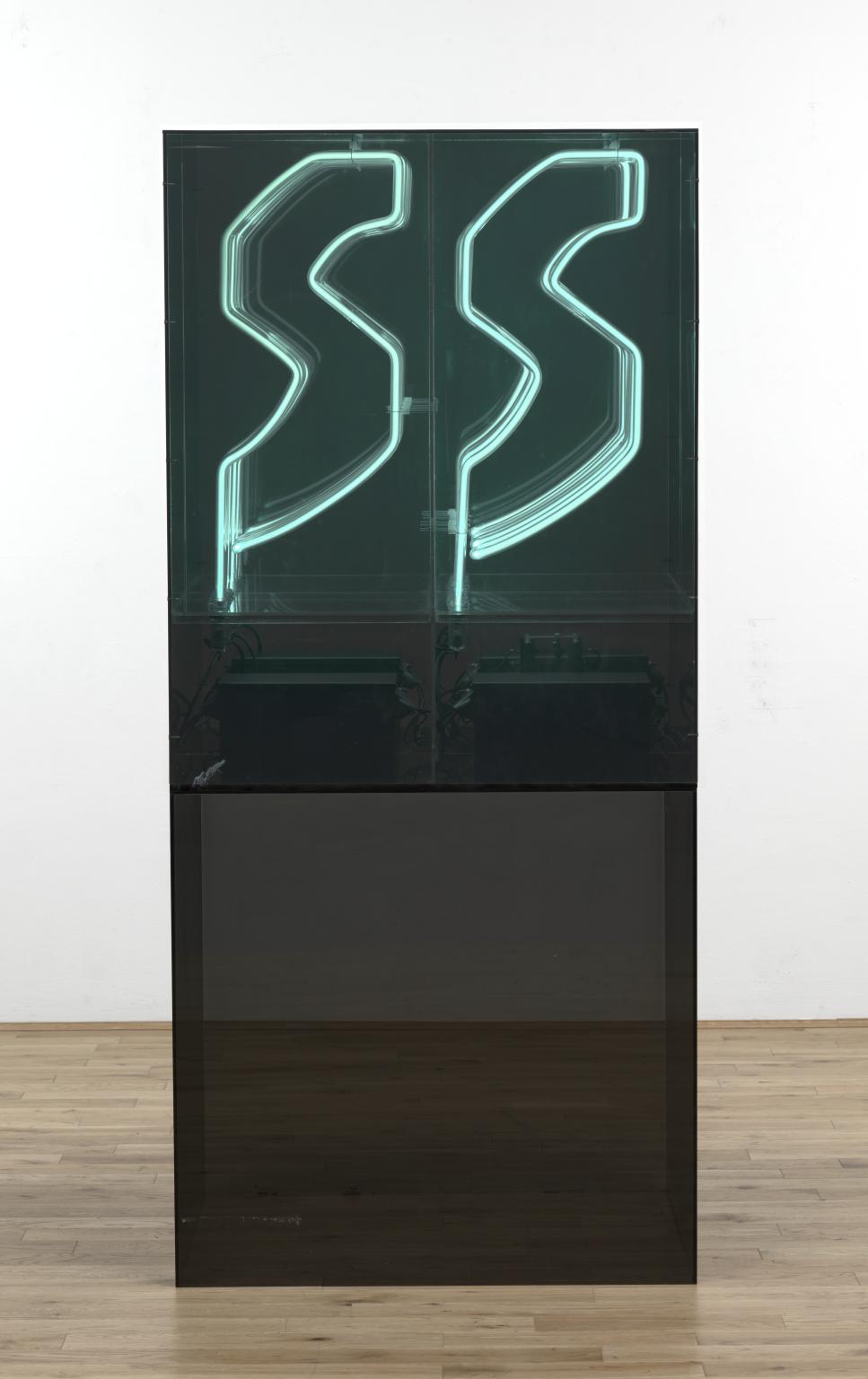 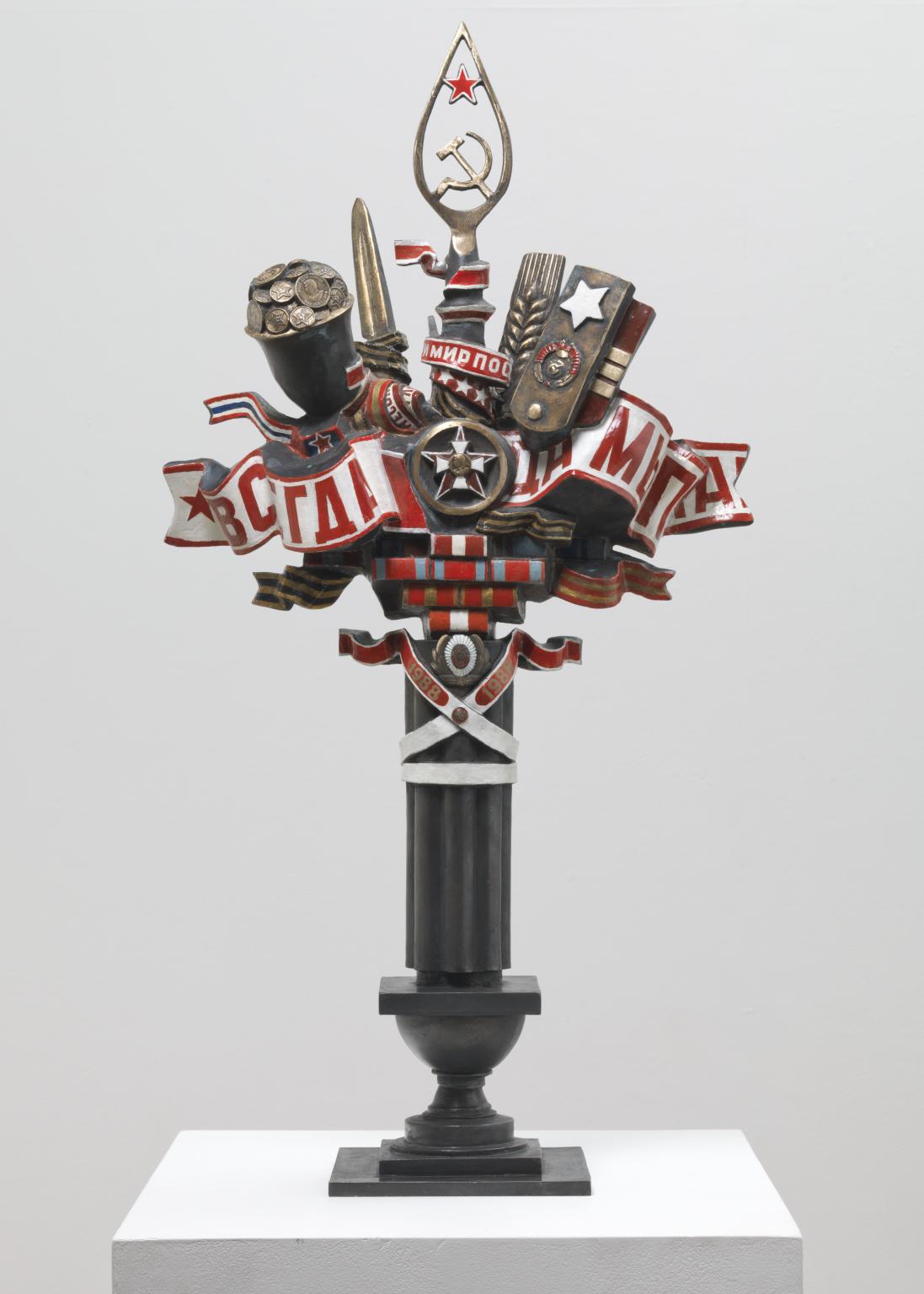 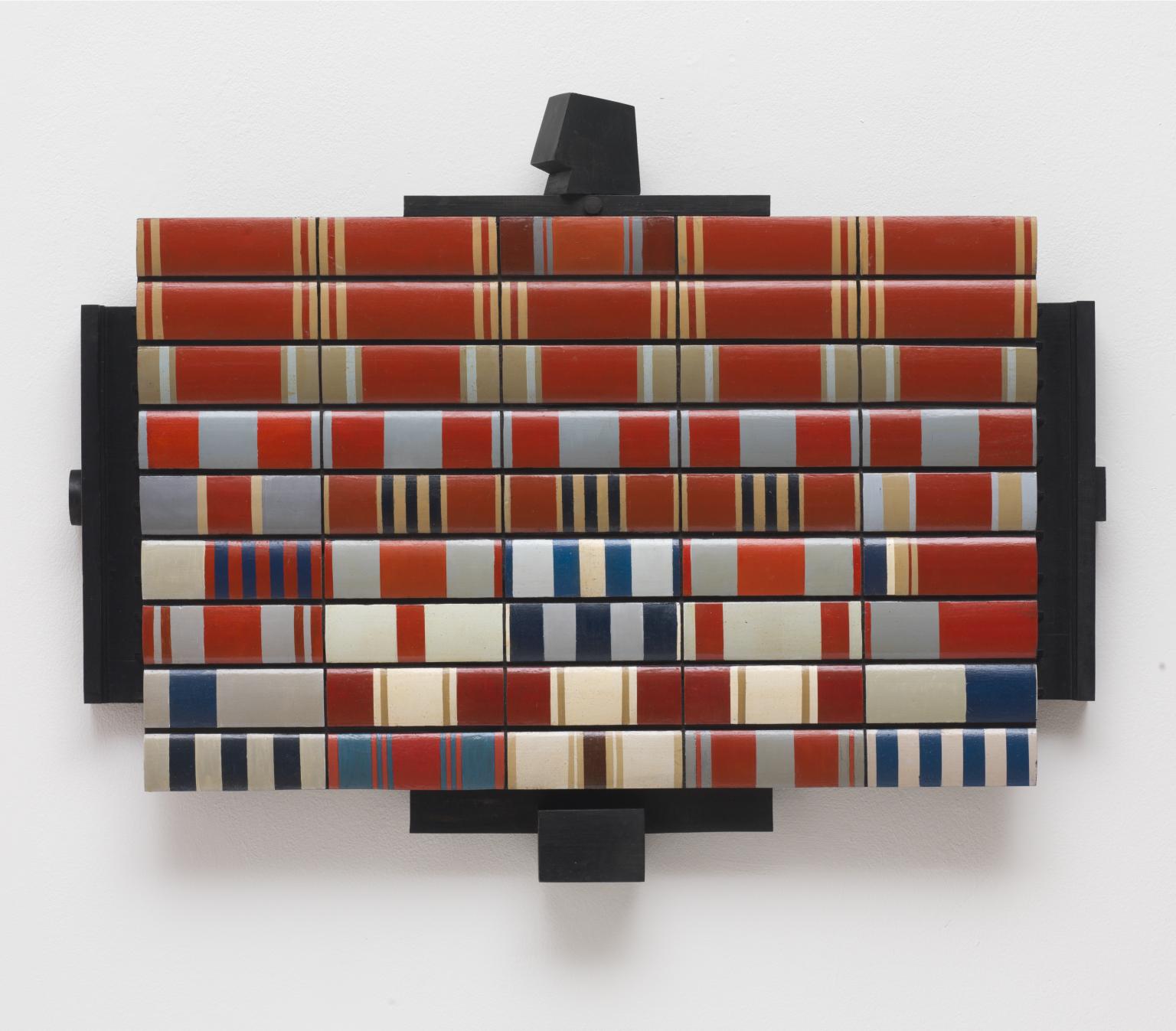 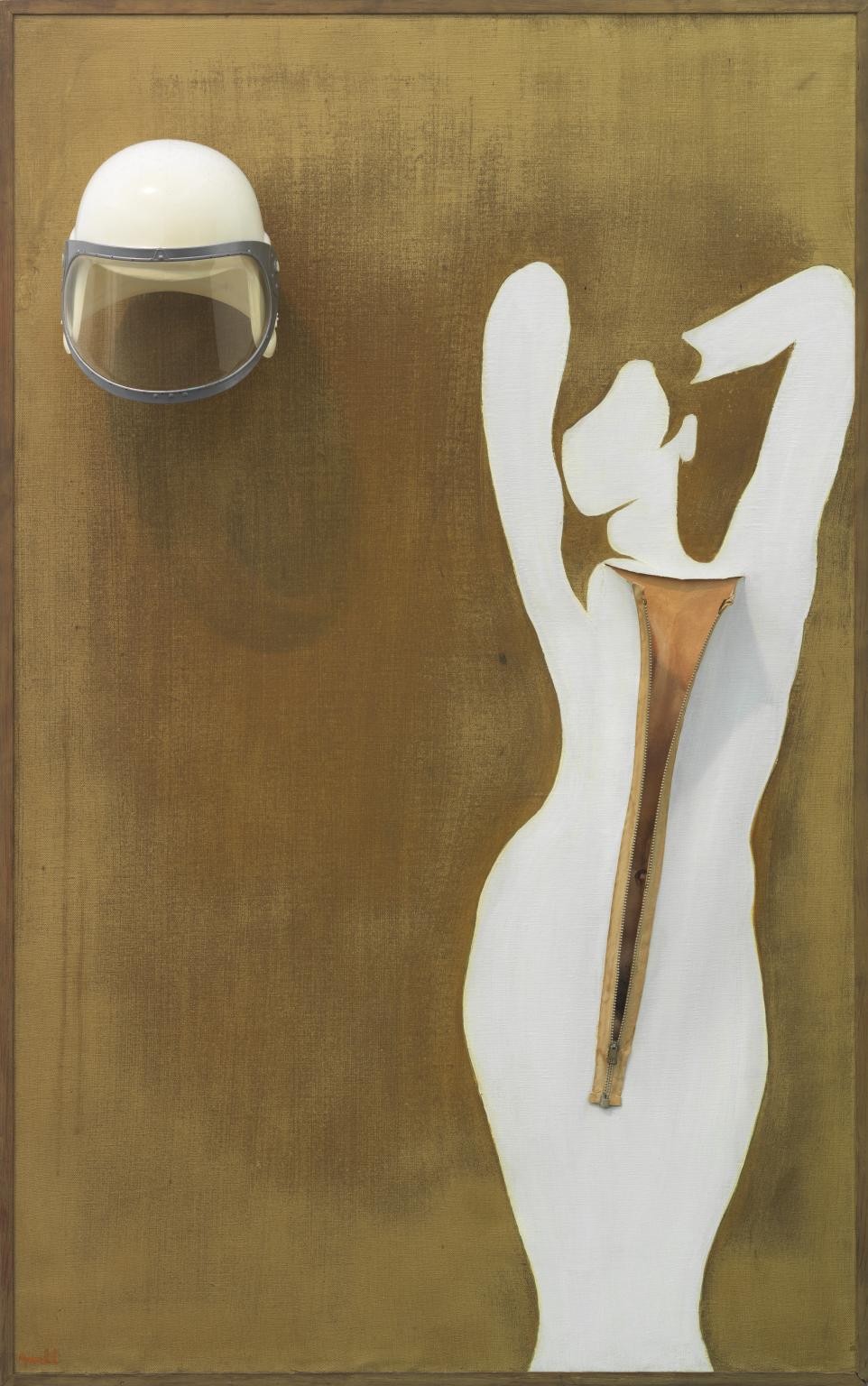 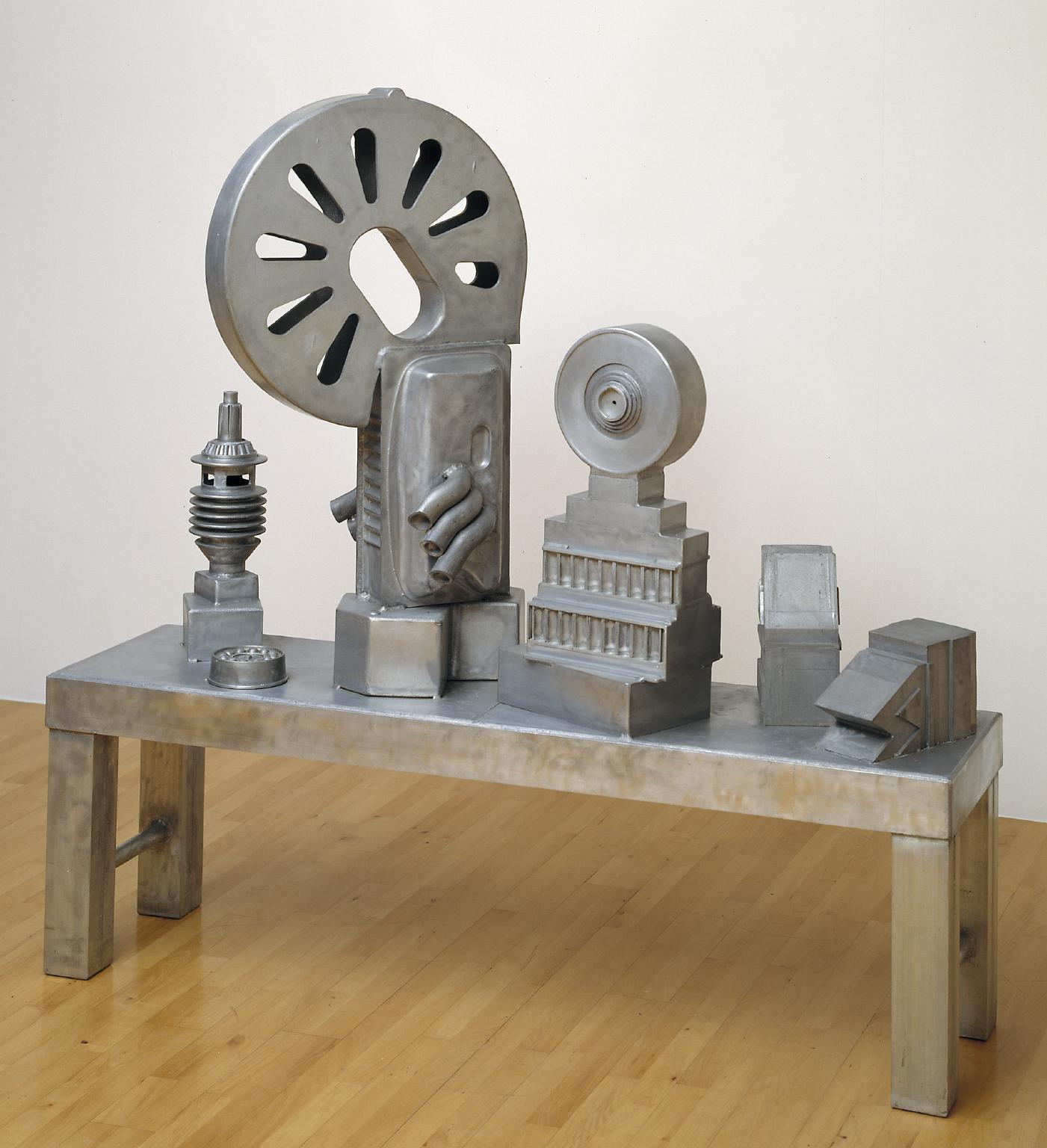 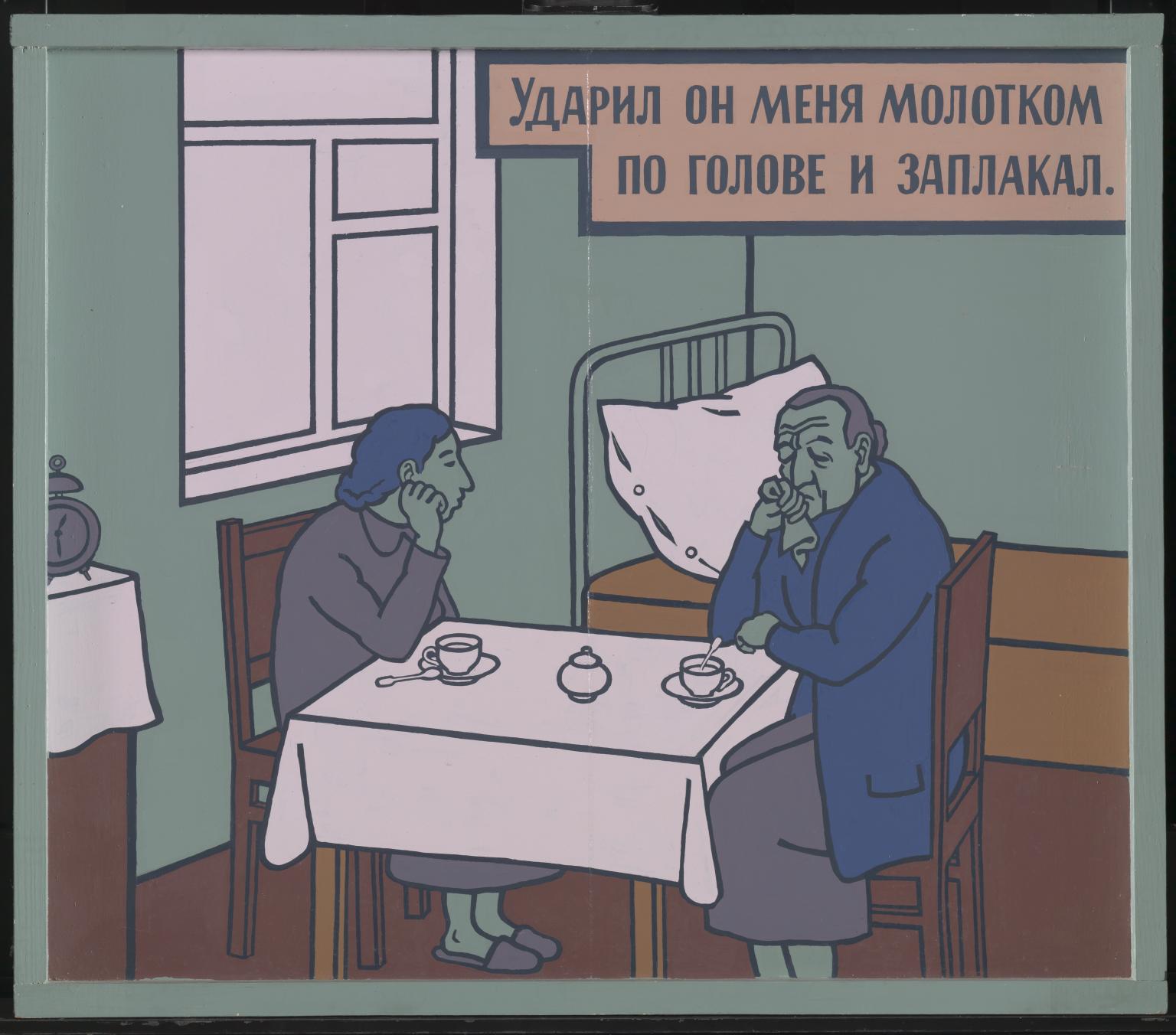 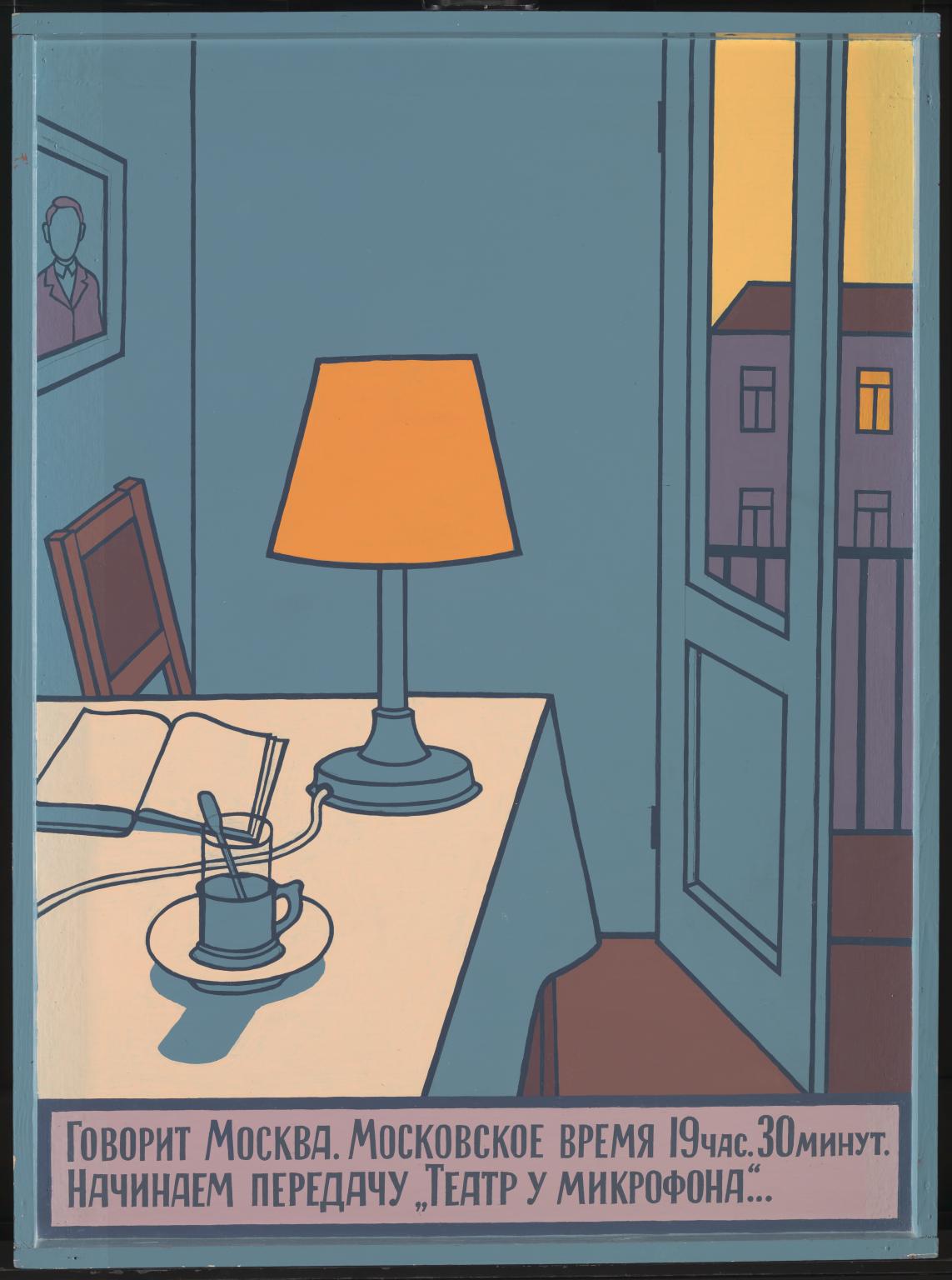 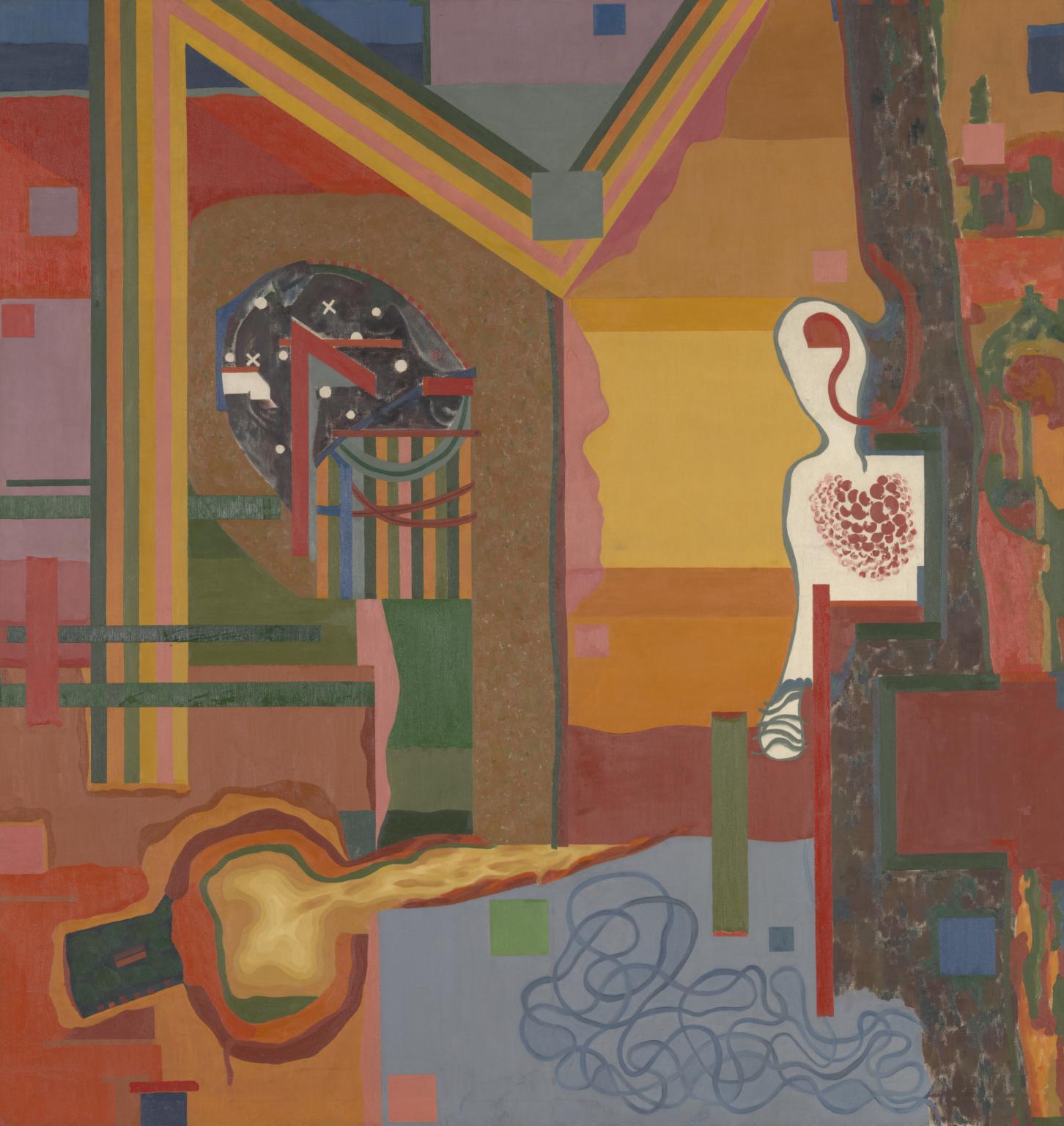 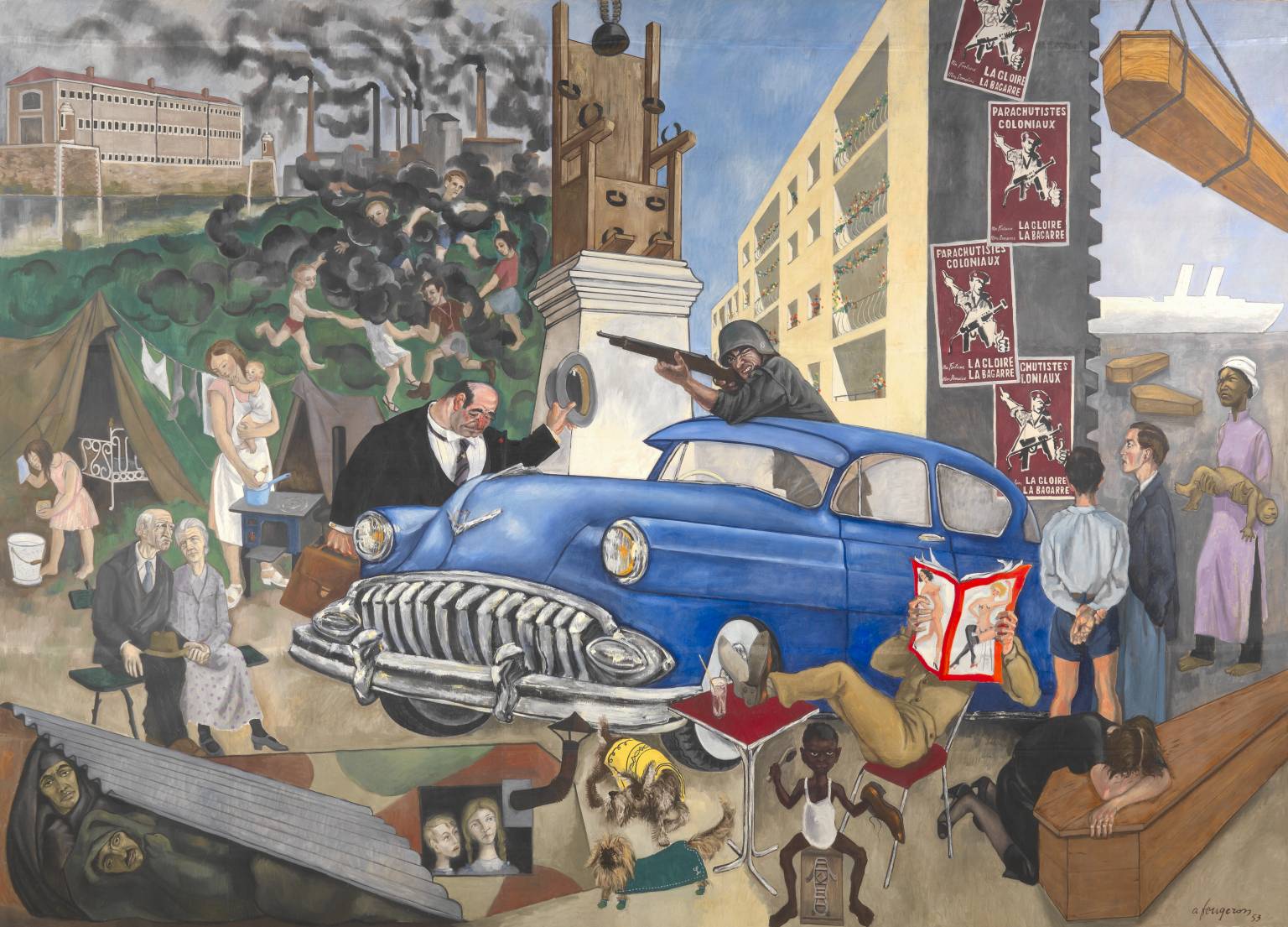 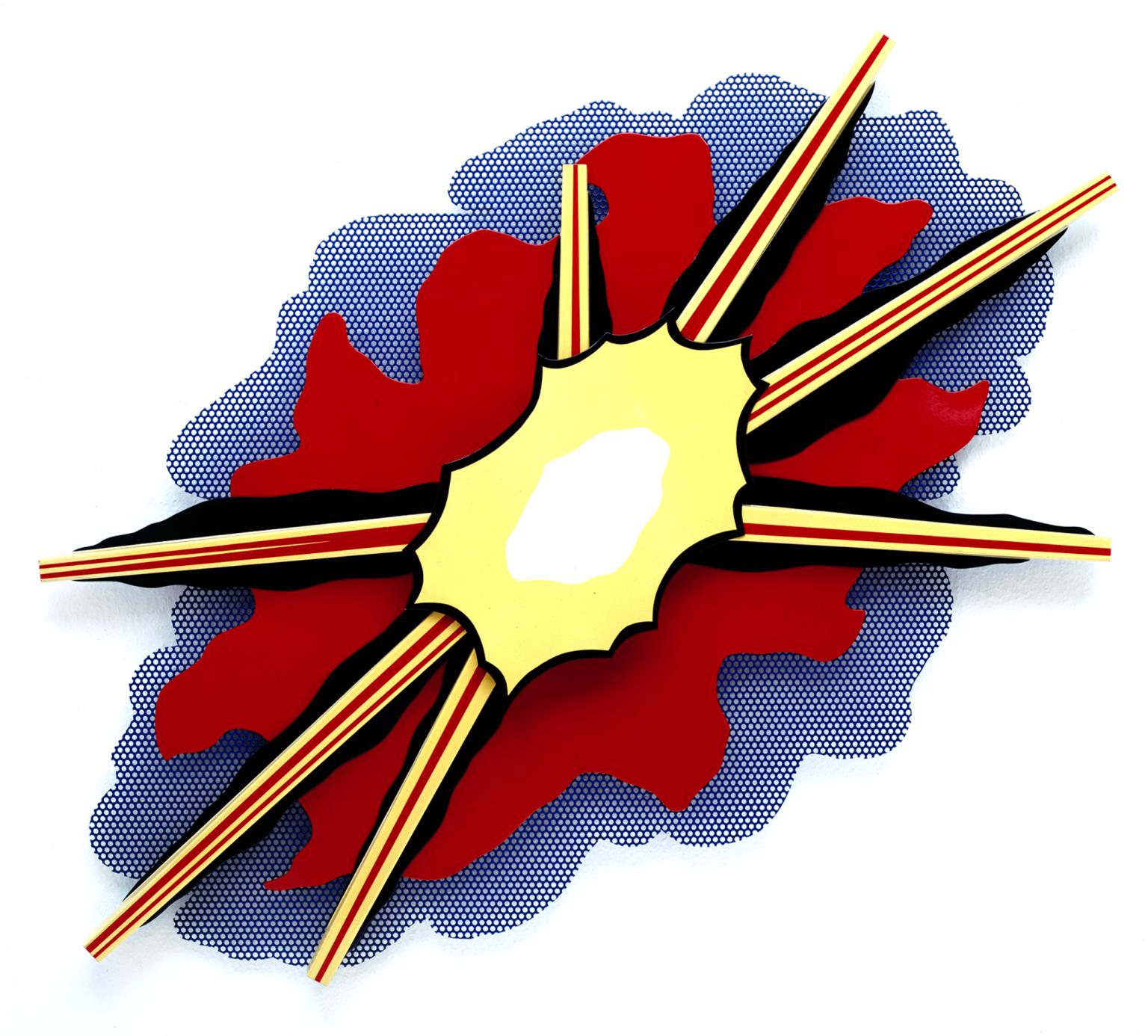